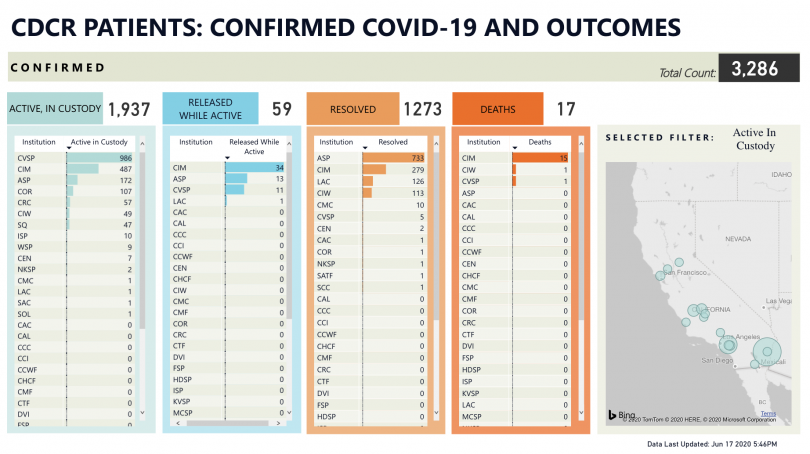 On Tuesday night, the California Department of Corrections and Rehabilitation announced that incarcerated people with less than 180 days remaining on their sentences would soon be eligible for early release, amid the coronavirus pandemic.

Over the last three months, people locked inside California’s vast prison system have been slammed by a swiftly moving virus that, so far, has infected at least 3,267 prisoners and 564 staff living and working in overcrowded and often unsanitary conditions. A total of 17 incarcerated people and 2 prison workers have died of complications related to the virus, as of June 17.

Part of the problem, is that most of CA’s long-overstuffed facilities are still filled beyond capacity. This has created an environment in which any staff member or prison resident who has the virus is likely to get a few others sick, followed by the exponential doubling and redoubling of infection.

Meanwhile, families and attorneys representing mentally ill and disabled prisoners in federal cases have called for expanded early releases. Their calls have gone unanswered until this week.

To be eligible for early release, individuals must have plans for housing. They will also be subject to parole supervision until the end of their sentence (up to 180 days).

People who are serving time for domestic violence, sex offenses, and other violent crimes will not be allowed to leave prison early under this initiative.

The 180-day early release threshold will continue to stay in place moving forward, allowing additional prisoners to go back to their communities and families early.

This is what prisoners’ families and attorneys have been calling for since March, when the state conducted a one-time release of approximately 3,500 people up to 60 days away from their release. The CDCR could have kept these early releases rolling, but chose to keep people within weeks or short months of their release locked up, until now.

The state prison population currently sits at a little over 110,000 between institutions and camps. A high percentage of prisoners are elderly and otherwise medically vulnerable to the virus.

Chuckawalla Valley State Prison, one of the prisons experiencing a particularly bad outbreak with nearly 1,000 infected, is at 129 percent capacity. Many of the other prisons that have experienced surges in COVID-19 cases are similarly packed full of people in dorms, and spread across gyms and even tents. Yet, the moves the department has made inside prisons don’t appear to have stopped the spread of the virus in a meaningful way.

In a June 16 letter to families explaining why the CDCR would not be resuming visits or programs, CDCR Secretary Ralph Diaz said that the sweeping infections and deaths had occurred “despite our efforts to head off COVID-19 through comprehensive testing, treatment protocols, physical distancing, and sanitation.”

“To those whose loved ones have passed away, I extend my deepest condolences on behalf of CDCR and CCHCS,” Diaz said. “My heart breaks for their families, and I pray every day for them and for all who are fighting this disease. For those with loved ones inside, please know our staff are working around the clock, in tandem with public health experts, to keep them safe.”