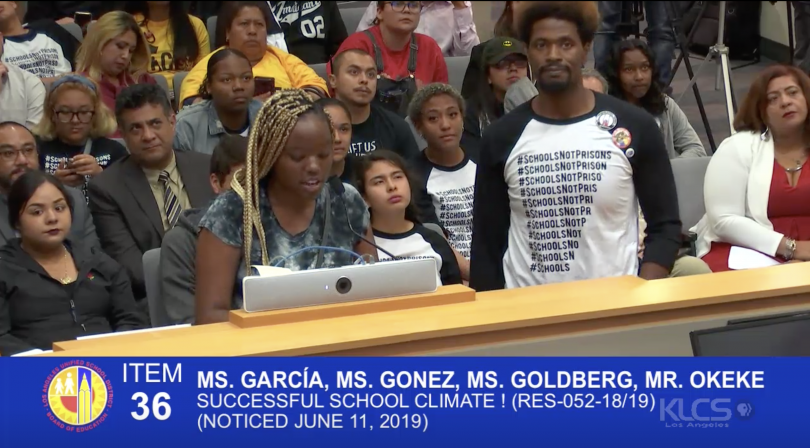 In 2011, the Los Angeles Unified School District established a policy requiring schools to subject students at its 200 middle and high schools to daily “random searches.” School administrators pull kids out of class, search them with a handheld metal detector wand, and go through their bags and belongings looking for “contraband.”

On Tuesday, after years of protest from parents, students, community groups, and others concerned about the practice, the LAUSD Board of Education voted to eliminate the controversial random searches.

The resolution, “Successful School Climate: Safe, Respectful, and Learning for All” requires schools to phase out the “flawed and ineffective” and “dehumanizing” practice by July 2020. After next July, the district will only allow “individualized searches conducted by well-trained personnel when there is reasonable suspicion.” The resolution also calls for the district to ensure “that any alternative policy does not include an increase in police presence or police surveillance practices,” and that “any alternative policy is rooted in evidence-based research and practices.”

According to data UCLA Civil Rights Project researchers collected, the way LAUSD random wand searches are currently conducted disrupts learning and is not actually all that “random.”

Released last June, the report–created by the ACLU of Southern California and its #StudentsNotSuspects Coalition partners–found that school staff used the searches to punish and humiliate certain students for unwanted behavior. Parents, kids, and teachers also reported that specific student groups, including students of color and low-income kids, were disproportionately selected for searches.

The practice has rarely resulted in the confiscation of actual weapons, either.

Between the two school years studied, 2013-2014 and 2014-2015, school administrators found no guns during the searches. Less than one percent of random searches–86 out of 105,366–turned up any weapons (none were guns). And those 86 seizures accounted for 6 percent of all weapons found on campuses, the majority of which were found by other means, according to the report. School supplies like whiteout, markers, and highlighters accounted for 61 percent of confiscated items, and things like personal hygiene items, over-the-counter pain medication, asthma inhalers, and cough drops accounted for another 10 percent of items seized from kids.

“When I was in seventh grade, an administrator stopped my English class, and pulled a lot of us out into the hallway with our bags,” an LAUSD student, Nadera Powell, told the board on Tuesday. “We were confused and nervous. They searched us with metal detectors one by one, and made us dump out our bags so they could look through our things. We felt criminalized, we felt violated, and we felt humiliated.”

Powell said that she and her classmates struggled to concentrate in class after that. “It felt like nobody cared whether we learned anything or not,” Powell said. “It actually felt like we were in jail, instead of school, which is a problem. Thank you for putting an end to these searches. Thank you for caring about our class time.”

According to the 2018 report, no other large school district in the nation has a policy “that even remotely resembles LAUSD’s.”

Last August, a Blue Ribbon Panel on School Safety convened by LA City Attorney Mike Feuer issued its own final report and recommendations for improving student safety at LA Unified schools. The panel recommended that the school district immediately suspend the practice until the program could be audited. One panelist argued that the program should be dumped “permanently…without any further evaluation.”

Ten months later, the school board has decided to follow the recommendation of the blue ribbon panel, the #StudentsNotSuspects coalition, students, parents, and other community members who fought for years to protect kids’ rights to class time uninterrupted by random wand searches.