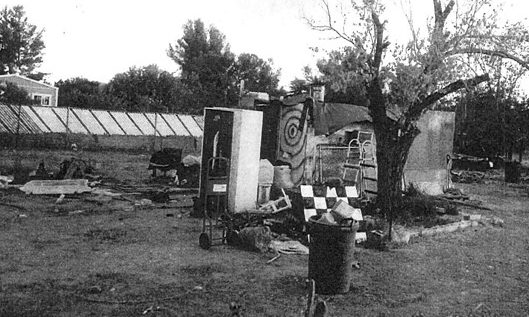 In a 29-page opinion handed down on Friday, July 27, the Ninth Circuit Court of Appeals sided with a couple that was, at the time of a near-fatal incident, living in a Lancaster shed.  In doing so, the Ninth decided against a team of Los Angeles County Sheriff’s deputies, in a case that has already gone to the U.S. Supreme Court.

There is, of course, a lot more to the story.

To enter or not to enter

On October 1, 2010, Angel Mendez, who was 30 at the time, and Jennifer Garcia, then 27, and five months pregnant, were asleep on a futon in a one room plywood structure—a shed really—that Paula Hughes, a friend Mendez had known since high school, had been letting them occupy. As the justices noted in their ruling, from the outside, there were several obvious elements suggesting the shed was likely inhabited. A portable air conditioner was installed on one side of the structure. An electric cord ran to the shed, as did a hose.

The structure had no windows, but its entrance included a hinged wooden door, and a hinged screen door that opened to the outside. A white gym storage locker that contained clothes, coats and other possessions, was located a few feet to northeast of the shack, which was in turn around 30 feet from Paula Hughes’ house.

At the time the incident occurred, the couple was struggling financially, and usually one step above homeless.  Yet they had been living on the Hughes property for around ten months in the shack that Angel Mendez had constructed, and not suspected of any crime.

On that day, members of the “COPS HIT” team (the unfortunately conceived acronym for “Community-Oriented Policing Services High-Impact Team”) reportedly entered the shed without knocking, calling out, or identifying themselves.

They had come to the shack looking for Ronnie O’Dell, a large white guy who had gone AWOL from his court-ordered drug rehab. The parolee, who had a string of drug and other minor arrests, reportedly did not have violence on his record. But the COPS HIT team had gotten a tip that someone looking like O’Dell might have been seen riding a bike near or in front of Hughes’ house. But it might not have been Hughes. In any case, he was gone now.

Three members of the  team, including deputies and the team supervisor, Sergeant Greg Minister, pounded on the door of Hughes’ house and demanded entry, where they found neither O’Dell nor any drugs.

Two more deputies, Christopher Conley and Jennifer Pedersen, were sent to the back of the Hughes residence, then when the house was cleared the two proceeded to clear the rest of the property, which included three small storage sheds and the approximately 7X7 foot structure where the Mendez couple lived.

When Conley and Pedersen approached the screen door of the shack, they did not knock, call out, identify themselves or in any way warn the couple of their presence,  before entering. Nor did the deputies have a warrant.

Although Deputy Pedersen testified he felt no fear when he stood outside the shed, where the screen door was open, and the wooden door closed.  When he rapidly opened the wooden door, and pulled aside a blue blanket that was draped inside the door frame, his entrance woke the sleeping couple.  Mendez, who had a BB gun beside him on a futon, which he reportedly kept to shoot rats, picked up the gun attempted to move it to the ground, according to Mendez’ later testimony.

Deputy Pedersen said otherwise, and testified that the gun was pointed his direction.

Seeing the BB gun, within seconds of entry, Pedersen, with Conley following, unloaded a total of fifteen bullets into Angel Mendez and Jennifer Garcia, who is now Jennifer Mendez, since the two have subsequently married.

Angel Mendez was shot approximately ten times. He was critically injured, and lost much of his leg below the knee as a consequence of the shooting. He faces substantial ongoing medical expenses, the judges noted. Jennifer Mendez was shot in the upper back and left hand. The back bullet pierced and broke her collar bone. (She did not, however, lose her five-month pregnancy.)

“The officers’ unlawful entry was reckless, at a minimum,” Judge Gould wrote for the panel. And while the use of force might have been reasonable on its face, “…under the provocation doctrine,” he wrote, citing additional case law, “where an officer intentionally or recklessly provokes a violent confrontation, and that provocation is itself an independent Fourth Amendment violation.”

Thus “the officers were still liable for excessive use of force, because the unlawful entry and the failure to knock and announce provoked the circumstances giving rise to the subsequent shooting.”

Furthermore, stated the ruling, “officers did not have a warrant or consent and did not satisfy any emergency or exigency conditions that could make an entry lawful.”

Instead, officers “decided to proceed without taking even simple and available precautions, including announcing their presence, which could have protected the Mendezes from the severe harm that befell them,” Gould wrote.

This was not the first time the case had been to the Ninth Circuit.

On August 13, 2013, Mendez and Garcia Mendez were awarded $4 million in a four-day, no-jury trial before U.S. District Judge Michael Fitzgerald.

The district court ruled that the COPS HIT team violated Mendez and Garcia’s Fourth Amendment rights when they entered the shack without a warrant, and without knocking and announcing.

The deputies had argued that the building did not appear inhabitable. But Judge Fitzgerald ruled that the officers could not “reasonably” have believed the shack to be uninhabited, as there were signs the structure was occupied, including the air conditioning unit and a clothes locker.

In addition, Sergeant Greg Minster, who was the supervisor of the team, testified during the trial that he told the two deputies before their search that a man named Angel and his pregnant girlfriend lived in a shed in Hughes’ backyard.

“The multiple indicia of residency,” Fitzgerald wrote in his 61-page findings of fact, “including being told that someone lived on the property, means that the conduct rose beyond even gross negligence. And it is inevitable that a startling armed intrusion into the bedroom of an innocent third party, with no warrant or notice, will incite an armed response. Any other ruling would be inconsistent with the Second Amendment, as discussed below.”

The Ninth Circuit Court of Appeals agreed with the district court, ruling that the deputies initiated “a situation which led to the shooting and required the officers to use force that might have otherwise been reasonable.”

The county’s lawyers next took their appeal to the U.S. Supreme Court.,

At the time, as WLA reported, the LASD’s deputies union, along with the county’s legal team, argued that the appeals court’s ruling endangered police officers.

“The Ninth Circuit’s ‘provocation’ rule puts the lives of officers at mortal risk by imposing civil liability for a reasonable use of force,” the county’s attorney’s argued. “An officer who has not used excessive force but who has nevertheless otherwise violated an individual’s constitutional rights must refrain from defending himself even if his life is threatened or be held financially liable…”

The Supremes vacated the Ninth’s ruling, mainly objecting to the above-mentioned “provocation rule,” and, in a unanimous judgement, SCOTUS remanded the case back to the appellate court for a rethink of “provocation” and other parts of the Ninth’s original ruling.

On Friday, everyone received the requested reconsidered ruling that, in its 29 pages included the full text of the Fourth Amendment to the U.S. Constitution in case anyone had forgotten.

The right of the people to be secure in their persons, houses, papers, and effects, against unreasonable searches and seizures, shall not be violated, and no Warrants shall issue, but upon probable cause, supported by Oath or affirmation, and particularly describing the place to be searched, and the persons or things to be seized.

The panel concluded that, on remand, “the judgment shall be amended to award all damages arising from the shooting in the plaintiffs’ favor.”

The opinion also stated that the Mendezes are entitled to recover damages under California negligence law.

In case you’re interested, as we inevitably are, Ronald Gould, located in Seattle, Marsha Berzon, San Francisco, and George Caram Steeh III, a Senior U.S. District Judge for the Eastern District of Michigan, are all Bill Clinton appointees.

(We generally find it uncommon for all three on an appeals panel to be appointed by the same U.S. President, but this time the that’s what the legal slot machine produced.)

Oh, and U.S. District Court Judge Michael Fitzgerald, who presided over the federal trial in this case is an appoint of President Barak Obama

Those readers interested in additional information on the case might enjoy reading Judge Fitzgerald’s extensive and detailed findings of fact, which includes much of the points of view of both plaintiffs and defendants.

Then….if you want to go still farther,  you can read the trial  brief by defendants Christopher Conley and Jennifer Pedersen here.

After that,  read the trial brief by plaintiffs Angel Mendez and Jennifer Lynn Garcia here.