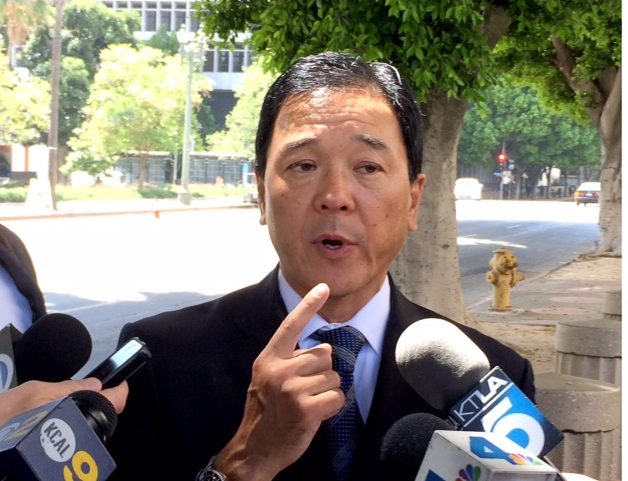 The 9th Circuit Court of Appeals denied the appeal by former Los Angeles County undersheriff, Paul Tanaka, to have his criminal conviction overturned for obstruction of justice and conspiracy to obstruct justice.

As a result of that conviction, the former undersheriff is serving a five-year sentence in a low-security federal prison camp in Englewood, Colorado.

At the August 7 appeals hearing before a three judge panel, the attorney for the former powerful number two man of Los Angeles County Sheriff’s Department, Charles Sevilla, talked mostly about the Lynwood Vikings and why the prosecution’s insistence on trying to paint Tanaka as a member of the notorious deputy clique meant his client could not get a fair trial.

But the 9th’s judicial panel—made up of circuit judges Stephen Reinhardt, Morgan Christen, and Alex Kozinski—didn’t buy the argument.

“Tanaka’s testimony on direct examination clearly opened the door to evidence impeaching his credibility,” the judges wrote in their four-page ruling (which you can find here). “Tanaka testified extensively about his commitment to upholding the law and the core values of the Los Angeles Sheriff’s Department. He emphasized that he ‘had no tolerance for deputies who wore a badge and violated the law.'” Thus, “…evidence of his involvement with the Vikings is relevant to assessing the veracity of these statements.”

The second argument by Tanaka’s appeals attorney was the claim that former sheriff Lee Baca should have been given immunity and compelled to testify as a witness for Tanaka, purportedly in order to the contradict the damaging testimony that former Deputy Micky Manzo had given for the prosecution.

Again the panel disagreed finding that  Tanaka “did not demonstrate that Sheriff Baca’s testimony would have ‘directly contradicted’ that of immunized government witness Deputy Mickey Manzo.”

The three judges also noted that, during his trial, Mr. Tanaka’s attorneys did not “object to the introduction…of evidence of historic civil rights abuses in Los Angeles County jails.” And they didn’t agree with the former undersheriff’s contention in his appeal that “admission of this evidence “affect[ed his] substantial rights” or “seriously affect[ed] the fairness, integrity, or public reputation of judicial proceedings.”

The panel’s only concession to Tanaka’s attorney’s argument was their opinion that “the prosecutor’s reference to the Vikings as a “gang” in the government’s closing argument, however, “was error,”  but that mistake wasn’t what is known, in legal terms, as the more serious “plain error.” they wrote. Nor did the error “amount to a denial of due process.”

Just to recap a bit, Paul Tanaka, if you’ll remember, was convicted of obstruction of justice and conspiracy to obstruct justice. During his trial, the government alleged, among other things, that he helped hide a inmate/federal informant Anthony Brown from his FBI handlers in an effort to obstruct a federal grand jury investigation into corruption and brutality in the county’s troubled jail system.

At Tanaka’s trial, government prosecutors presented their case in two parts that they labeled “the crime” and “the context.” The context, according to the government, was Tanaka’s style of supervising, which—they suggested—favored a cowboy brand of law enforcement where toughness was allowed for— even required—and deputies were encouraged to step over the legal line, as needed, and subsequently protected from any consequences of their actions. This, according to the prosecution, was the larger context surrounding Mr. Tanaka’s actions during the summer of 2011 when the hiding of Anthony Brown and other events took place.

During his trial, Tanaka himself took the stand, where he worked to counter the prosecution’s dark portrait by presenting himself as someone with an “unwavering sense of right or wrong,” who attempted to impart that ethic to those working under him.

When it came time for cross-examination, prosecutor Brandon Fox worked to challenge Mr. Tanaka’s portrayal of himself as an outstanding supervisor who was above reproach. It was in this context that Fox brought up the Vikings, a deputy clique that the former undersheriff purportedly joined when he was a sergeant at the department’s Lynwood station from 1987 to 1991.

In the 62-page brief for Tanaka’s appeal to the 9th Circuit, Sevilla (who is highly regarded in the appeals world), focused on three issues.

The first was the prosecution’s use of the Vikings, and the fact that U.S. District Judge Percy Anderson allowed the subject to be brought into the trial at all.

The second issue was the contention that Anderson should have forced the prosecution to offer immunity to former LA County Sheriff Lee Baca and compel Baca to testify in Tanaka’s defense.

The third and final point of contention in the brief had to do with some disputed jury instructions.

On Thursday, the three-judge panel also denied that the jury instructions were problematic.