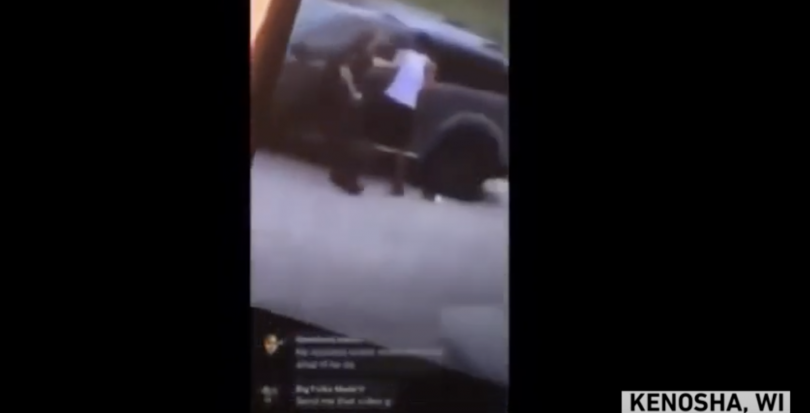 Two Wisconsin police officers were placed on leave Monday while state authorities investigate what happened on Sunday evening that led to another Black man being shot by cops.

A little after 5 p.m., on Sunday, August 23, police in Kenosha, Wisconsin, shot 29-year old Jacob Blake multiple times as the man attempted to enter a grey Dodge SUV, after law enforcement was called to the area because of a reported domestic dispute.

Blake, who is still alive, and in stable condition, was reportedly not part of the argument that precipitated the call to the cops.

Instead, Blake was attempting to calm down two women who were fighting, according to multiple witnesses who spoke to local reporters.

A video that captured the shooting has been widely posted on social media. The cell phone video below  shows as Blake leaves the sidewalk in front of the grassy front lawn of a nearby home, and walks around the SUV, which is parked on a residential street in Kenosha. Two uniformed officers, their weapons drawn, trail him as he walks, as other officers yell at Blake to stop.

Blake opens in the driver’s side door and starts to bend down to get in the car, when one of the officers grabs his white t-shirt shirt and fires at him seven times at what appears to be close range. It is not entirely clear whether one or two officers fired the shots.

According to a press release from the Kenosha PD, after the shooting, officers “provided immediate aid” to Blake, who was transported via “Flight for Life” to a hospital in Wauwatosa, WI.

On Sunday evening, a growing crowd of protesters gathered outside the site of the shooting.  Overnight the protests continued to expand.

As news of what had occurred in the lead up to the shooting, KARE-11 News Minneapolis, broadcast an interview with a male witness who told reporters that Blake, who was shot seven times, was not armed, and was in no way aggressive, but was trying to help out with the arguing women. At the time of his contact with the police, said the witness, he was attempting to return to his SUV for his child or children. 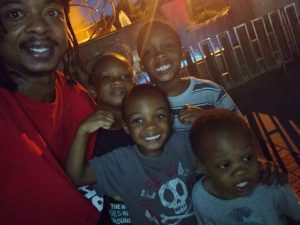 (There are reports that Blake’s three sons were in the car and witnessed the shooting, which attorney Benjamin Crump announced via Twitter that he had confirmed later Sunday evening.)

According to the statement from the Kenosha Police that WLA obtained, both the Kenosha Sheriff’s Department and Wisconsin State Patrol were requested on-site fairly immediately “so that the scene could be turned over to an agency, other than Kenosha Police.”

The KPD further stated that the Wisconsin Department of Justice, Division of Criminal Investigation, will be investigating the shooting, and that the Kenosha department is stepping completely away from the matter, as of Sunday night.

“Tonight, Jacob Blake was shot in the back multiple times, in broad daylight, in Kenosha, Wisconsin,” the state’s governor Tony Evers tweeted in a string of tweets on Sunday evening.

“Kathy and I join his family, friends, and neighbors in hoping earnestly that he will not succumb to his injuries.

“While we do not have all of the details yet, what we know for certain is that he is not the first Black man or person to have been shot or injured or mercilessly killed at the hands of individuals in law enforcement in our state or our country.

“We stand with all those who have and continue to demand justice, equity, and accountability for Black lives in our country—lives like those of George Floyd, of Breonna Taylor, Tony Robinson, Dontre Hamilton, Ernest Lacy, and Sylville Smith.”

Reporter Sarah Thamer of Wisconsin’s WISN TV posted a photo on Twitter of Blake (see above)  that Thamer said the injured man’s fiancée had given her.

Attorney Crump has also posted a video on his Twitter feed that show’s the shooting at closer range, and it is very disturbing to watch, even more so knowing that three little boys were reportedly inside that car.

Mr. Blake’s children who were been confirmed to be in the SUV during the shooting, are three, five, and eight years old.

On Monday, there were demonstrations and rallies, which have continued on Tuesday, some of the demonstrations violent, much to the destress of Jacob Blake’s family members who have repeatedly called for peace.

At a Tuesday afternoon news conference, Blake’s family told press that a Kenosha police officer’s bullet severed Blake’s spinal cord, and shattered some of his vertebrae.

There is also, we hear, kidney and liver damage, much of his small intestine had to be removed.

Benjamin Crump, the family’s attorney, said it would take a “miracle” for the 29-year-old Blake to walk again.

There is also a second video, which shows some of what happened before the video that we have all seen begins.

Late Tuesday night, Kenosha County Kenosha County Sheriff David Beth told multiple news sources that one person had been killed and at least two were injured late on thursday, as white male militia-like individuals were seen in videos that appeared on Twitter, which have later been confirmed as genuine.  The militia men were carrying assault rifles as they stalked through crowds of protesters in Kenosha.  One of the men was visibly shooting gat protesters, one of whom was shot in the chest, while another victim was being helped out of harms way after being hit by a friend.

Early Wednesday morning, law enforcement sources updated the press with the news that a second gunshot victim has now died as a result of the burst of violence, which came amid the arrival of self-declared militia members on Kenosha’s streets,

By Wednesday afternoon a 17-year-old had been arrested had been charged with homicide in relationship to the two people who were killed and the third seriously wounded by gunfire during the overnight protests.