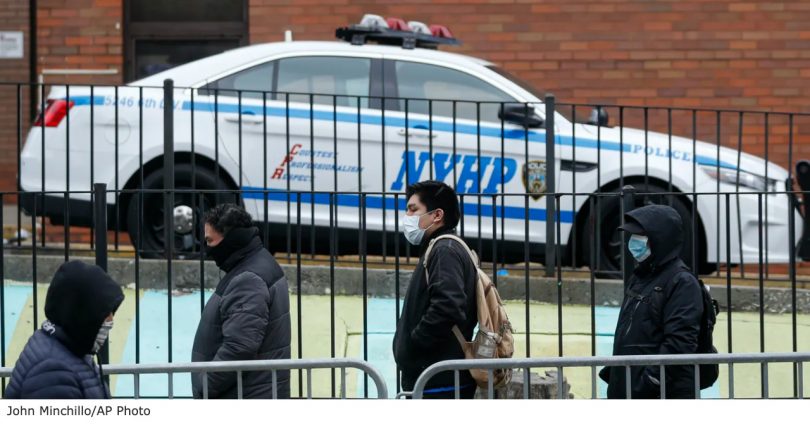 By Tom Nolan, The Conversation

Social distancing orders in place across the U.S. have added to the long list of low-level offenses that police are charged with enforcing as a routine part of their job.

There are about 18,000 law enforcement agencies in the United States, with close to 800,000 police officers. To date most appear to be exercising judgment and restraint in taking action against those occupying public spaces during the current pandemic. But then, of course, there are the exceptions.

I was a Boston police officer for 27 years before becoming an academic. My career on the force began with the large-scale unrest that accompanied Boston’s school desegregation and busing crisis of the 1970s and ended with the massive redeployment of police resources for the city’s hosting of the 2004 Democratic National Convention.

So I know firsthand how rapidly shifting priorities can determine the way law enforcement carries out its mandate. And as the author of a book on policing in marginalized communities, I also know that when officers “overpolice,” especially communities of color, it can undermine trust and increase tensions.

Taking a close look at how policing is done during the coronavirus pandemic can shed light on both of these issues: how policing adapts in times of crisis and what happens when police take a more hands-off approach to enforcement.

Police in New York City, Nashville, Philadelphia, San Francisco and Chicago have reportedly scaled back significantly on routine enforcement operations. Even when it comes to the policing of new social distancing orders, officers in departments across the U.S. are being encourage to tread lightly. “If we see large groups, we’ll go and talk to them, educate them about it and try and get compliance,” explained Chief Terence Monahan of the New York Police Department.

Such a strategy is particularly prudent given how officer numbers have been depleted due to the coronavirus outbreak. In early April, almost 20% of NYPD officers were out sick. And New York is far from being the only city whose police have been hit by illness. Chicago has seen hundreds of officers call out sick and in Detroit, the city’s police chief came down with COVID-19 alongside many rank-and-file officers.

This has coincided with a significant decrease in arrests in U.S. cities during the pandemic. The Boston Globe reported that arrests for January through April 2020 were down almost 60% compared to the same period in 2019. This sharp drop-off has not been accompanied by an increase in reports of crimes. In fact, in Boston, the rates of serious crimes remain nearly identical, dipping by just 1% over the same time frame.

Other cities have seen slight drops in crime. New York City, for example, has seen an overall 4.2% decrease in serious crime in the last month when compared to the same period in 2019 “with the steepest declines realized amid the citywide coronavirus protections of the last two weeks,” according to the NYPD.

It is not known to what extent the crime figures have been affected by fewer people going out during the lockdown, leading to fewer potential victims. The data on that do not appear conclusive, with some major cities, like Washington D.C., reporting murder rates as flat, but shootings up.

Such large drops in arrest rates suggests that low-level misdemeanors and so-called quality-of-life offenses like drinking from an open container in public are not being targeted by police in the same way as they were before the public health crisis. The fact that serious crime figures have remained comparatively static, or have fallen in some cities, calls into question the notion that arrests of lower-level offenses can prevent the commission of serious crimes – the so-called “broken windows” theory of policing that still has its adherents despite coming under heavy criticism in recent years.

The coronavirus pandemic is an unprecedented event and its long-term impact on arrests and crime rates is not known. But research into what happens when police tread lightly may give us an insight as to what is going on now.

The current operational scaling back of routine law enforcement is reminiscent of police slowdowns or stoppages of the past. Often taking place at the beat officer level, these have occurred during disputes between rank-and-file officers and police management. Other suspensions of “policing as usual” have been observed amid tensions related to brutality allegations and punitive actions against officers.

In a study published in 2017, Louisiana State University professor Christopher Sullivan and Zachary O’Keeffe, a Ph.D. student at University of Michigan found that scaling back so-called proactive policing – high rates of stop and frisk detentions, court summonses and arrests for misdemeanor offenses – after the police-related death of unarmed New York resident Eric Garner coincided with a reduction in violent crimes. They found that reports of murder, rape, robbery, felony assault, burglary, grand larceny and grand theft auto declined by between 3% and 6% during the halt on proactive policing.

In a 2016 study examining police work slowdowns, law professor Andrea Cann Chandrasekher found that despite the dramatic fall in arrests “the effects on public safety may be limited” and “mostly concentrated in the area of minor criminal disorder” rather than serious offenses.

Likewise an NYPD work slowdown of 2015, following the shooting deaths of officers Wenjian Liu and Rafael Ramos, saw a dramatic fall in low-level arrests but no rise in crime.

After the coronavirus pandemic, it may be time to rethink policing practices that rely on enforcement, such as stop and frisk and the overzealous use of arrest and ticketing for trivial offenses such as jaywalking, panhandling, turnstile jumping and marijuana possession. This imperative to reimagine the role of police in our cities is supported by research indicating that broken windows policing has not worked in keeping communities safer. Moreover, such “overpolicing” may actually exacerbate violent crime rates in affected communities.

I see the less invasive model of policing seemingly being employed during the coronavirus pandemic as a prudent and timely undertaking. But it also provides an opportunity that may not present itself again in the near term: to reimagine policing without arrests being seen as the main tool against crime.

Tom Nolan is a Visiting Associate Professor of Sociology at Emmanuel College.