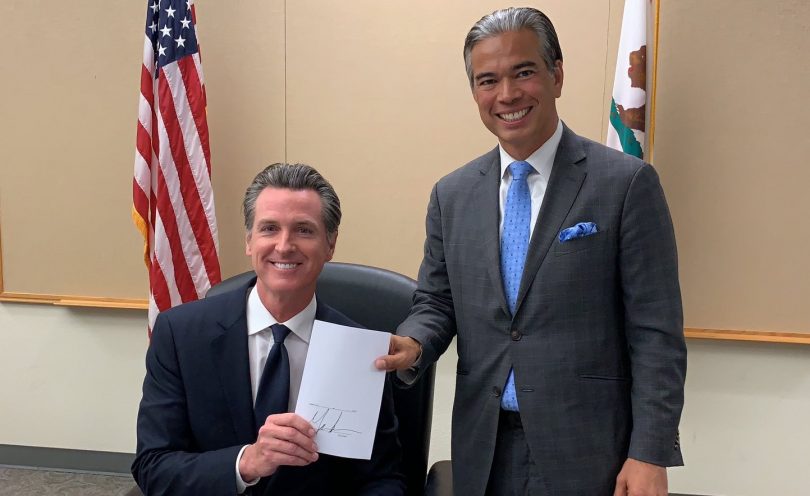 October 13 was California Governor Gavin Newsom’s final day to approve or reject what remained of more than 1,000 bills legislators sent to his desk this year. On his final two signing days, the governor approved over 100 bills and vetoed more than 120 others.

The scrapped bills, Gov. Newsom said, imposed too much of a financial burden on the state. These and the other proposed changes to CA law Newsom vetoed in recent weeks totaled $1.2 billion in initial costs — a price tag that would have more than doubled by the time the would-be laws were fully implemented.

These vetoes included a bill to make jail releases safer for those returning to their communities, and a bill intended to reduce the number of kids that local jurisdictions send to troubled state lockups.

The first bill, SB 42, was designed to greatly reduce the number of late-night jail releases, which can put people in serious danger — especially if they are women, far from home without a ride or a cell phone or any money, as in the case of Mitrice Richardson, who went missing in 2009 after the Los Angeles Sheriff’s Department’s Malibu/Lost Hills Station arrested the young woman — who appeared to be suffering a mental health crisis — and then released her into the night, at 12:15 a.m.

Mitrice’s naked corpse and pieces of her clothing were found a year later in an out-of-the-way area of the Santa Monica Mountains known as Dark Canyon.

Local jails across the state routinely release both male and female inmates at all hours, day or night.

And despite the resulting tragedies, lawmakers’ efforts to halt after-hours releases have, yet again, failed.

This year, Senator Nancy Skinner introduced SB 42, also known as The Getting Home Safe Act, in response to the death of another young woman, Jessica St. Louis, who died of a drug overdose in the early morning hours after a late-night jail release in Alameda County.

A handful of hours later, at 5:30 a.m., Jessica’s body was found at the East Dublin BART Station — about a 40-minute walk from the jail. After her death, community members rallied, criticizing the sheriff’s department for freeing women at all hours of the night, and for failing to distribute Narcan, an opioid overdose medication, to vulnerable inmates as they leave jail.

“It was a death sentence to release Jessica in the middle of the night, in the middle of nowhere,” Jessica Nowlan, the executive director of the Young Women’s Freedom Center, told SF Weekly in August 2018. “To send vulnerable system-involved women and girls into the streets at night, without access to support or even public transportation, is an act of violence.”

Newsom said in his veto message that he agreed with the intent of the bill, which would have required law enforcement to offer individuals scheduled for release between 5 p.m. and 8 a.m. the option to remain in jail until a safer daytime hour. For those who declined to voluntarily stay in jail, sheriffs would have been required to provide a safe place to wait for a ride. According to the governor, however, the fiscal responsibility for safer jail releases governor should lie with local governments, not the state.

“This bill’s intent can be accomplished through a more tailored approach that does not put the state treasury on the hook for local jail operations costs which are a local responsibility,” Newsom wrote.

“We are disappointed in this outcome,” the Young Women’s Freedom Center said in a statement after the veto. “SB 42 was inspired by the death of Jessica St. Louis and the dozens of women who were brave enough to share their stories of assault and harm as a result of late-night releases.” The group noted, however, that the veto did not mean the governor had “dismissed” the cause. “We are grateful to have the opportunity to work with him in the coming weeks and months to end late-night releases altogether and to improve county jail procedures for people being released.”

Newsom’s other noteworthy veto was SB 284, a bill juvenile justice advocates deemed to be a crucial reform. The bill by Senator Jim Beall (D-San Jose) sought to de-incentivize transferring kids to troubled state lockups far from their communities.

The cost to lock youth up locally has soared in some counties, to as much as $500,000 annually for each youth, according to an SF Chronicle investigative series called “Vanishing Violence.” Across the state, counties continue to pump money into nearly empty facilities holding far fewer youth than they did 20 years ago, when citizens and policy-makers feared the juvenile “superpredator.”

Yet, because it only costs counties $24,000 to send a child to a state facility, local jurisdictions ship kids off to the state Department of Juvenile Justice (DJJ), passing on the lion’s share of incarceration costs. (It costs the state $300,000 to lock up each kid in DJJ facilities.)

Passing SB 284, also called the Keep Youth Closer to Home Act, would have served to keep kids in local facilities, nearer to their families — where they could receive better treatment and services than the DJJ provides — by increasing the yearly DJJ fee that counties must pay from $24,000 to $125,000, in certain cases.

Specifically, the bill would have applied the rate to the transfer of teens whose crimes occurred before age 15, or whose sentences were shorter than 7 years.

In his veto letter, Gov. Newsom argued against a “blanket financial disincentive,” noting that the DJJ, soon to be transformed into the Department of Youth and Community Restoration, serves “a specific cohort of high-need youth who have often times have been unable to receive needed services at the county level.”

The legislative news was not all bad, of course. Among dozens of worthy bills that survived the final gauntlet was a bill to extend the statute of limitations for victims of childhood sexual assault, while also expanding the definition of such assault. Thanks to AB 218 by Assemblymember Lorena Gonzalez (D-San Diego), survivors will now have until age 40, or five years after the reasonable discovery of the crime to file civil lawsuits against their abusers. Currently, survivors have until age 26, or 3 years from discovery — whatever comes later.

“The idea that someone who is assaulted as a child can actually run out of time to report that abuse is outrageous,” Asm. Gonzalez said.

“For decades we failed our kids,” Gonzalez said after the bill’s passage. “Now adult survivors of child sexual abuse will have a chance to be heard.”

On Friday, October 11, just two days prior to his final deadline to sign or decline the last bills, Newsom announced that he had accomplished his campaign promise to abolish the state’s use of private prisons to hold prisoners and immigrant civil detainees.

“These for-profit prisons do not reflect our values,” Newsom said.

The bill, AB 32, which was authored by Assemblymember Rob Bonta (D-Oakland), will ban new private prison contracts starting in 2020 and phase out their use altogether by 2028.

“The built-in incentives for these businesses are all wrong,” Assemblymember Bonta said in support of his bill. “A private, for-profit company that is traded on Wall Street will inherently be incentivized to maximize profits and minimize costs — including the important ‘cost’ of investments in programs, services and rehabilitation efforts for inmates—through warehousing our inmates.” This new law will help the state shift priorities toward effective rehabilitation programs that “minimize recidivism rates and maximize successes for Californians upon their reentry into society,” Bonta added.

Currently, private prisons in California hold more than 1,600 California inmates, a number that has declined significantly this year. Under Gov. Newsom, the CDCR pulled hundreds of inmates from the last out-of-state private prison, in Arizona, in June, and from the Central Valley Modified Community Correctional Facility last month.

On the civil detention side, there are four lockups stuffed with 4,000 immigrants. These facilities are currently operated by for-profit, private companies, including the notoriously bad Otay Mesa Detention Center in San Diego, under the operation of CoreCivic, and the Adelanto Detention Facility run by GEO Group.

The bill will ban private detention centers with which the federal government contracts, but will not block the feds from erecting their own facilities, or contracting with counties to use their jails, as is the case with Orange County’s Theo Lacy Facility.

The bill has another major caveat. It will allow the CDCR to enter into or renew a private prison contract in order to comply with a federal court order to maintain the prison population at or below 137.5 percent capacity.

In May, the prison population hovered at around 134.8 percent of design capacity. Those numbers should continue to fall thanks to state sentencing and prison reforms intended to reduce the state’s reliance on incarceration.

It’s worth noting that AB 32 also does not apply to privately owned facilities run by the CDCR or local law enforcement, only facilities that are operated by private prison companies.

That same Friday, Newsom also sent through a wave of 15 fresh new laws intended to reduce mass shootings and gun violence by expanding firearm restraining orders and restricting gun sales, among other strategies.

“Gun violence is an epidemic in this country, one that’s been enflamed by the inaction of politicians in Washington,” said Governor Newsom. “While Washington has refused to act on even the most basic gun safety reforms, California is once again leading the nation in passing meaningful gun safety reforms.”

Five bills, specifically, expand and strengthen restraining orders meant to keep guns out of the hands of people displaying certain warning signs that they may harm themselves or others — from possessing firearms.

Under CA’s current so-called “red flag law,” passed in 2014 in response to the Isla Vista mass shooting, members of law enforcement, family members, and household members can petition the court to issue these temporary restraining orders, which allow law enforcement to seize firearms, magazines, and ammunition from the individual in question.

One of the new laws, AB 61, will expand that pool of eligible court-petitioners to include campus staff, employers, co-workers, and mental health professionals.

Another bill in the package, AB 12, extends the maximum duration of a gun violence restraining order, and a renewal of that order, from one year to up to five years.

In California, counties have varied widely in their use of the restraining orders. San Diego County stands apart from most other counties in that it has emphatically embraced the red flag law, according to The Trace and Voice of San Diego. Since 2017, San Diego County has approved over 300 gun violence restraining orders — more than any other county in CA — resulting in the seizure of more than 400 weapons and nearly 80,000 rounds of ammunition. To put it in perspective, in 2018, LA County issued 31 of the restraining orders, and San Francisco issued just one, while San Diego issued 185. While it’s unclear if the law has prevented mass shootings in the area, San Diego’s City Attorney Mara Elliot, who has become a national champion for “red flag” laws and implementation, thinks so. “We can never prove that we saved lives, but we believe we have,” Elliott said.]

Read the full list of the 15 gun control bills: here.