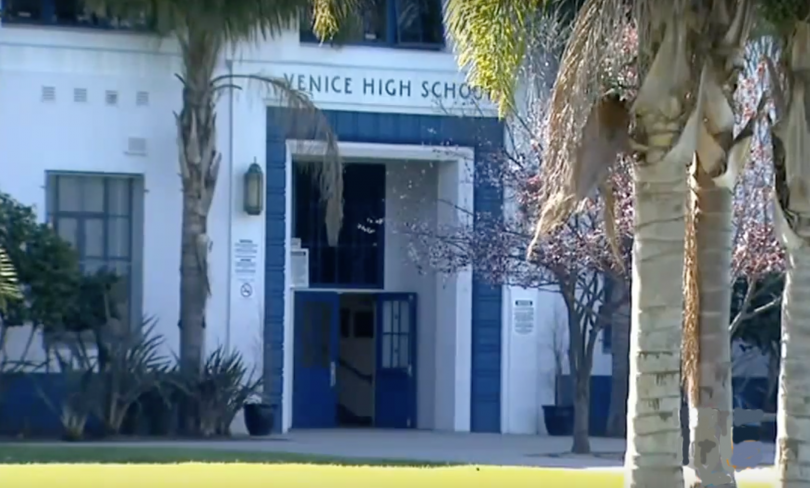 EDITOR’S NOTE: When we last left off, it was 2010, and Venice High School English teacher, Dennis Danziger Danziger, had just learned the reason his student, a kid named John Rodriguez, who had a stupendous talent for writing, had been missing from school.

John had been arrested and charged with attempted murder.

(If you missed Chapter One you can find it here.)

Those were not the words I expected from Jorge. I had braced myself and imagined I would hear, “John got jumped.”

Or “John’s home got broken into.”

Or “John’s girlfriend broke up with him and he’s too depressed to crawl out of bed.”

I’ve taught for 17 years in the LAUSD system, and I’ve heard a wide variety of excuses, many of them shocked me:

“I was absent because My mom broke up with her boyfriend and he went crazy and broke everything in the house. I’ve been home for three days cleaning up.”

“Umm, I, uh, got picked up for carjacking over Christmas break and it, uh, got a little rugged for me behind bars.”

Jorge could provide no other details except that John and his brother were locked up in an LA County jail near Magic Mountain, not in a juvenile detention facility.

I knew John was six weeks shy of his eighteenth birthday at the time of his arrest. He must have been charged as an adult. I thought. Did they house underage boys with men if they had been charged as adults? I didn’t know.

Jorge said he hoped to visit John within the week.

After Jorge left, and I was again alone in my classroom, I thought about what I had learned and concluded that there must be a mistake. Attempted murder? No way.

I knew this kid. At least I thought I did. I’d certainly invested more time in him than any of the other 185 students on my roll sheet. Talent like this didn’t come around very often. Talent like this more than caught my attention, made me want to focus on it, nurture it, use the talent has a bridge to a better education and a better life.

Sure, there were other students whose talents were also off-the-charts. James, a self-described Rastafarian, who I taught at Crenshaw could turn anything into an instant rap.

Once, as an experiment, I asked James’ classmates to shout out words—any words appropriate for class—and I scribbled them quickly on the board. Then Kalfani, who sat next to James, put down the beat and in a flash, James created a rap interweaving every word on the board into an instant poem. It was stunning.

So was John’s writing. I could not bring myself to believe that John’s next piece of writing would be about life behind bars.

My next thought turned to his older brother, Damion. Recently John read a new essay to the class. In the essay, he grows bored hanging out at home watching TV and so leaves the house and heads to the nearest Burger King for a cheeseburger. Along the way, three African American teens drive by and one taunts him, “What you looking at?”

John senses trouble and ignores the other boy, but the car stops and the one guy jumps out. Fists fly.

“After a minute of this brawling we both jump back and take a breather,” he wrote. “I look towards the other two black teens heading towards me. Their faces say it all. They want to fight me.”

Before it can be three on one. John pulls out his cell phone, hits a number. The blows begin to reign down on him again. As he is being pummeled, he sees his brother “at the bottom of the hill, walking up.” Back up. The other teens glimpse the hard-eyed brother, stand up and sprint to their black Honda Civic and speed off.

As John’s essay ends, he is walking back into his house and feeling, for the first time, he writes, “I never thought I would sense brotherly love. Now I know what it means.”

After he read the essay in class, I asked if anyone cared to comment.

Karla raised her hand. “Johnny’s brother is my baby’s daddy.”

Karla is John’s sister-in-law. The baby’s uncle. Yet Karla and John sat three feet apart in class and I never witnessed them exchange a word And yet never a word, neither warm nor hostile between them.

“I never knew they were so close,” Karina said.

The day after Jorge told me of the arrest. I received a call from Johnny’s mother. Or maybe it was his girlfriend who called, I can’t remember. Things blur together when one has received a shock. And, teaching in a big city public school like Venice, shock descends on campus far too often.

On the first day of every school year, I intentionally arrive at campus early. I stand off to the side of the quad and watch the students interact. I like to observe that air of excitement. A new beginning.

In the course of the school year, wondrous things will happen. Students will cross the stage and become the first person in the family to receive a high school diploma. Students will receive their college acceptances. Some will leave for college with scholarship money in hand.

It is the rare school year in which a student doesn’t die in the high schools where I’ve taught. Often the dead kids have been my students. Three of my favorite students died in car wrecks, all of them smart, creative, intellectually curious, huge of heart, athletic and blindingly good looking. One of my students od’ed. I lost a student to gang violence. He was a guy I wasn’t crazy about. He was shot, and then run over by a car. I lost a student, a talented poet/rapper, to the stress put on his body by obesity. I’ve lost students to suicide, one by pills, another by hanging. Another’s life ended in a game of Russian Roulette.

And always it hurts a lot. Always it’s deeply personal. Always the sense of loss and bewilderment lingers on for years.

The day after Jorge’s visit, John’s mom came to visit me after school. Would I write a letter of support for her son? Maybe I could talk about his academic career. How well he performed in my class. His writing talent. How many of his essays had been published in our class anthology.

And could I ask his counselors, any APs, former teachers for the same?

“Maybe it’s my fault,” said his mom. She confessed had been a teenage mother. “My brother, my only brother who I love so much was shot. Killed. He was unarmed. So I told my sons that when they got to an age where they were going out, they needed to protect themselves. Maybe that was the wrong thing. Maybe it’s all my fault.”

“It’s not your fault,” I assured her.

“Their father was never around. Boys need a fatherâ€¦”

She stopped talking, wiped her eyes, caught her breath.

“Did John tell you what happened?”

The story she told was confusing. Her sons went to a bar to celebrate because Damion, the older one, had enlisted in the military. This was April fifth. He was to report for duty on April fifteenth. The bar visit was a last hurrah of sorts. There was some tough talk in the bar. The brothers got into a fight with two other patrons. All four of the fighters were kicked out of the bar and onto the parking lot. Soon the other two other fighters were joined by several of their friends. The brothers were outnumbered. Six to two. Eight to two. Something. Whatever it was, the sides were uneven. Dangerously uneven.

The brothers made a dash to their car. The mob of young men pursued.

One of the brothers reached into the glove compartment and fired two, maybe three, warning shots. Up in the air. Just to scare them off, said the mother. One of the bullets came down and grazed one of the would-be attackers. He was taken to the hospital. Stitched up. Released that night. He’d be fine.

“Sounds like self-defense,” I said carefully. “I don’t even understand why they were arrested.”

John’s mother hoped the brothers’ lawyer would be able to prove just that. Self-defense.

“Is he a public defender?” I asked.

Twenty-five thousand dollars? I wondered if she had that kind of money in the bank, or if this lawyer had her paycheck garnished, say a hundred or two hundred bucks a week till it’s all paid off, including interest.

I promised I’d write a character reference letter. She gave me the lawyer’s fax. The next day I faxed it over.

I asked around school. Assistant Principals, counselors, teachers. Could anyone write John a character reference? An art teacher promised she’d write a letter I sat down with an AP and a counselor who told me that they were so overwhelmed by their caseloads that they only students they remember are the exceptionally wonderful ones and the nightmarish ones. No one else could recall John—at least, not well enough to write a letter on his behalf.

The next day I faxed the art teacher’s letter to Mr. Currie.

I dropped the letter in a mailbox on the way to work.

For the next week, I waited for news and wondered. Would this talented young writer will be able to return to a classroom in the foreseeable future? Or did this teenager from the inner-city who could have written his way to a better life just threw away his talent.

To Be Continued on Wednesday.

Dennis Danziger teaches English in the Los Angeles Unified School District. He is a former sit-com writer, author of the novel, A Short History of a Tall Jew, and is the co-founder of POPStheclub, high school clubs that support students whose lives have been impacted by incarceration.