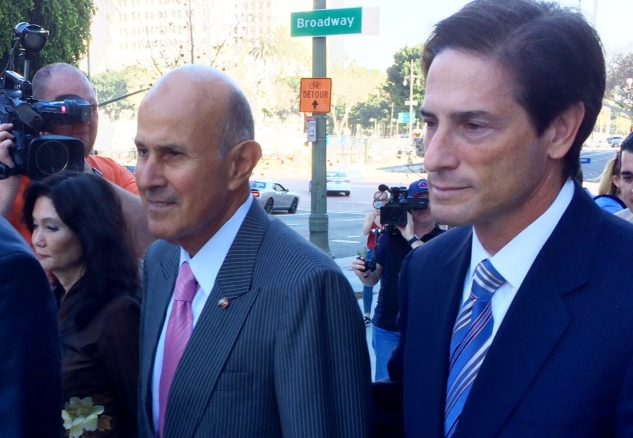 The Eyes of Sheriff Baca

“This is about seeing events through the eyes of Sheriff Baca,” said lead defense attorney, Nathan Hochman, as he began his closing arguments on Monday morning in the trial of former Los Angeles County Sheriff Lee Baca.

As Hochman spoke, the words came up on the juror’s video screens in big white type on a soothing blue background: Sheriff Baca’s Eyes.

It was a theme he would return to multiple times during his two-and-a-half hour final presentation to the jury. To understand the truth of the case, said Hochman, we must “see things” through the eyes of the man who was sheriff for fifteen years, and in law enforcement for close to a half century.

For approximately five hours, first the prosecution, then the defense, then the prosecution again, unfolded their competing versions of events that took place in the summer of 2011, which led to the charges that the four-woman eight-man jury began deliberating on Monday afternoon.

Mid-August through the end of September 2011 was when members of the sheriff’s department discovered the existence of an undercover FBI civil rights investigation into corruption and brutality by deputies working in the LA county jails. In particular, the LASD discovered a contraband cell phone among the belongings of a jail inmate named Anthony Brown. The cell phone turned out to belong to the FBI civil rights squad, and Brown turned out to be an FBI informant, who had participated in a sting operation in which he persuaded a deputy to bring him a contraband cell phone in return for a cash bribe, as the FBI secretly recorded the whole transaction

Prosecutor Lizabeth Rhodes was first up for the government on the trial’s final day.

In that summer of 2011, said Rhodes, “defendant Baca knew he had a big problem.” The problem, she said, was that the FBI “was investigating his department, and his jails for civil rights violations.” This investigation threatened Baca’s legacy, Rhodes told the jury.

What happened next was obstruction of justice, she said. “It started at the top” of the sheriff’s department “and went all the way down.”

Thus Baca had to investigate, Hochman said. “Imagine if he did nothing,” and a hit was put out on a witness using a contraband phone. Sheriff Baca didn’t know how many contraband phones there were. “He had to act immediately. He needed to get to the bottom of things.”

According to Hochman, Baca had two goals during the six-week period in question: “Get to the bottom of the FBI’s investigation.” And keep FBI informant Anthony Brown “safe.”

“Through Sheriff Baca’s eyes, there was no third purpose,” Hochman told the jury, there was no “obstructing of the FBI investigation.”

“Baca wanted to join the investigation,” not impede it, according to Hochman.

But having a cell phone brought into his jails had, for Baca, crossed a “line in the sand.” The FBI broke the law to enforce the law, the defense attorney said.

So Baca felt the urgent need to investigate what the feds were doing.

Nevertheless, the former sheriff did not try to keep Anthony Brown away from the FBI, Hochman said. He did not know that special agent Leah Marx was going to be threatened with arrest, despite testimony to the contrary.

The government’s main witnesses have been offered “sweetheart deals” and a “basket of goodies” to “say what the prosecution wants.”

The prosecution, defense attorney Hochman told the jury, “is trying to poison your view of Sheriff Baca.”

As for their theories of the case, the government, Hochman said, “keeps throwing spaghetti at the wall” hoping that something will stick.

But it hasn’t stuck, he said.

“The government keeps saying this was a chess match. It wasn’t even a game of checkers.”

Regarding the government’s charge that Baca lied four times to the feds, Hochman was dismissive. In a 4 ½ hour interview the former sheriff submitted to in April 2013, Baca did not knowingly make false statements. “He had no motivation to lie.”

In China and Russia,” Hochman continued, “you are presumed guilty and you have to prove your innocence. In this country, you are presumed innocent,” and it is the government’s job “to prove guilt beyond a reasonable doubt.”

And they haven’t done that.

Sheriff Baca did not abuse his power, Hochman concluded. He used his power to try to keep the people of Los Angeles safe.”

When Hochman stepped, it was the prosecution’s chance for rebuttal. This time Brandon Fox got up to address the jury.

“’Just don’t put the cuffs on her!’” These were the words that Lee Baca said before he sent his men “to threaten special agent Leah Marx,” began Fox. “And those are words that Mr. Hochman did not say in his two and a half hours.”

Hochman, said Fox, “tried to distort the facts, mislead you,” and he just “made stuff up.”

These are the “I’s” of defendant Baca, the prosecutor continued, spinning Hochman’s “Baca’s eyes” theme in a different direction.

“ Baca’s I’s were: Interfere and Impede. Investigate criminally. Intimidate and Improperly Influence,” according to Fox.

In chess, said prosecutor Fox, “the King controls the game.” Yet, Fox said, the king also stays in his area, while the pawns, the knights, bishops and rooks do the work. It’s the pawns—like former deputies James Sexton, Gerard Smith, and Mickey Manzo—-who are out there in the line of fire.

Fox took time to address Hochman’s lengthy efforts to shred the credibility of some of the government’s most crucial witnesses, all former department members, three of whom gained felony convictions as a result of their actions in the summer of 2011. A fourth, Tom Carey, was also indicted, but negotiated a plea deal.

Greg Thompson “has no reason to lie,” Fox said. “The government has given him nothing. He was forced to testify.” Yes, he was given immunity, but that meant he couldn’t lie “or he’d be charged with perjury.” Fox reminded the jury that Thompson repeatedly had to refresh his memory by reading his grand jury testimony.

But what were his past lies? Asked Fox. “Carey lied by saying all the actions” involving hiding Anthony Brown and threatening Leah Marx during the crucial six weeks in 2011 “were innocent. And they weren’t innocent.”

Now, to keep the deal with the government, Fox said, what he has to do is tell the truth.

Fox similarly worked to rehabilitate Mickey Manzo who, Fox said, wanted a deal but didn’t yet have one. However, Fox informed the jury, Manzo had testified at two previous trials and his testimony never wavered from his original “grand jury testimony.”

As for former deputy James Sexton: “The one condition of his supervised release, is to tell the truth. The one thing that could get him put back in prison is to lie to you.”

The prosecutor paused. “How do you know if someone lied to you?” Fox asked the jury finally. “You look at the evidence.”

Former U.S. Attorney Andre Birotte took ownership of everything that happened on his watch, Fox said. “He said to Baca, ‘Blame me.’ He owned everything.”

That’s what a leader does, Fox told the jury.

“Then there was the King. He tried to disown everything that happened.”

And, with a few additional words about how the prosecution had proved its case “beyond a reasonable doubt,” Fox sat down.

Finally, at approximately 2:45 p.m., the matter of the U.S. Government v. Lee Baca was placed in the hands of twelve jurors.

The jury went home 45 minutes later, at 3:30 p.m., and will return Tuesday morning at 8 a.m. to continue deliberations.