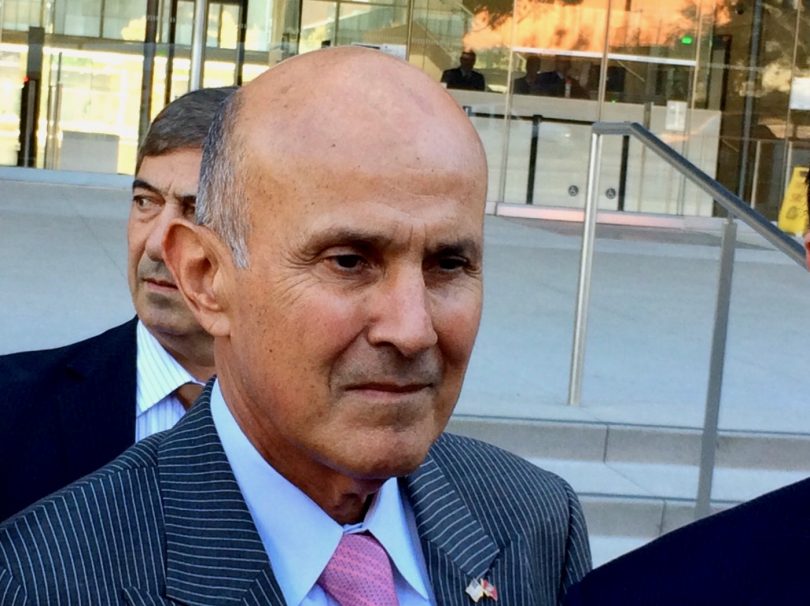 This fall, Lee Baca’s lawyers will ask a three judge panel to overturn the former LA County Sheriff’s conviction, and to grant him a new trial with a different judge presiding.

After much delay, this week the date for the appeal hearing was finally scheduled for Tuesday, November 6, at 9 a.m. at the Pasadena-located court for the 9th Circuit Court of Appeals.

In preparation for the hearing, Baca’s lawyers have filed another legal brief filled with newly aggressive arguments.

As readers will remember, on March 15, 2017, after deliberating for approximately fourteen hours, an eight-man four-woman jury found Baca guilty of one count each of conspiracy to obstruct justice, obstruction of justice and making false statement to federal investigators.

“Alzheimer’s disease is not a get out of jail card,” Anderson said just before he announced that he was sentencing Baca to 36 months in federal prison, with a year of supervised release.

Baca’s lawyers appealed the conviction to the Ninth Circuit right away.

On October 18, 2017, the Ninth found that the appeal had enough possible merit that it agreed to grant the former sheriff’s motion for bail pending his appeal.

The appeals court based its decision to grant bail on three principles.

First, wrote the court, Mr. Baca had “clearly and convincingly shown that he is not likely to flee or to pose a danger to the safety of any other person or the community if released,.”

(No one really disputed this part of Baca’s claim.)

The most interesting of the Ninth’s reasons was the conclusion that “Baca has raised in his appeal a ‘substantial question’ of law or fact.”

In other words, there was at least one point in Baca’s pitch for an appeal that the Ninth believed could have merit, namely his attorneys’ claim that the district court, in the person of U.S. District Judge Percy Anderson, “erred by excluding expert evidence” of Baca’s Alzheimer’s disease.

This claim, according to the Ninth, “is at least ‘fairly debatable,’” given that “the exclusion of the expert’s testimony was ‘directly relevant and material’ with respect to Baca’s claim that he lacked the requisite mens rea for the false statements charge.”

(“Mens rea” means criminal intent or guilty mind, in other words an individual’s awareness of the fact that his or her conduct is criminal.)

Moreover, wrote the appeals court, “if that substantial question is determined favorably to defendant on appeal, that decision is likely to result in reversal or an order for a new trial of all counts on which imprisonment has been imposed.”

Finally, according to the Ninth, Baca had shown, through “a preponderance of the evidence” that he filed the appeal “for a purpose other than delay.”

(Judge Anderson, who thought otherwise,  originally declined to order bail for Baca because, he wrote, “..the Court concludes that Defendant has failed to raise a substantial question likely to result in reversal or new trial.”)

In May of this year, Baca’s lead appellate lawyer, San Diego-based, Benjamin Coleman, filed a new 54-page brief in which he and his team attempted to strengthen its case for reversal. The mistakes made by the judge and the prosecution, according Coleman, included “the exclusion of critical defense evidence,” namely the testimony of the Alzheimer’s expert.

In another argument, Coleman wrote that Judge Anderson “erroneously empaneled an anonymous jury,” which limited the defense team in jury selection, since they had no way of researching the potential jurors, he said. At least the lawyers could have been given the names, according to Coleman.

Among the precedents on the lawyer cited was a case involving purported Mexican Mafia figures, in which jurors’ identities were disclosed to the attorneys “in advance to do background checks, without divulging those names to their clients…”

But, not so in Baca’s case. Moreover, in the previous related trials of sheriff’s department members for similar charges, argued Baca’s attorneys, “…there was not a hint of juror intimidation” and the juries were not anonymous.

Another of Baca’s lawyers’ claims is that Judge Anderson made a crucial error in the former sheriff’s first trial by wrongly declared a mistrial too quickly. (The former sheriff was tried twice after the jurors hung in the first trial in late December 2016 with eleven jurors voting to acquit and only one juror holding out for a conviction.)

Judge Anderson, Coleman and company wrote, erred when he refused “Mr. Baca’s request for an Allen charge,” but instead went ahead and declared the mistrial when the jury announced itself hopelessly deadlocked.

(The Allen charge, often called the “dynamite charge,” is a special instruction given to encourage deadlocked juries to reach agreement. The charge is named for an 1896 decision,Allen v. United States, in which the U.S. Supreme Court sanctioned the method of judicial shoving.)

All of these and more are interesting arguments.  But will they convince the Ninth?

It will also be interesting to see if Mr. Baca’s new teaching job will be included in any way in the government’s counterargument regarding the exclusion of the Alzheimer’s expert.

Aside from that side issue, the strategy of Lee Baca’s lawyers is very interesting and persuasive—irrespective of the former sheriff’s guilt or innocence.

And so the beat goes on.

WLA will be at the hearing.

Editor’s note: If you’d like to read Baca’s most recent trial brief for yourself, we’ve embedded it below.

Photo above by WitnessLA