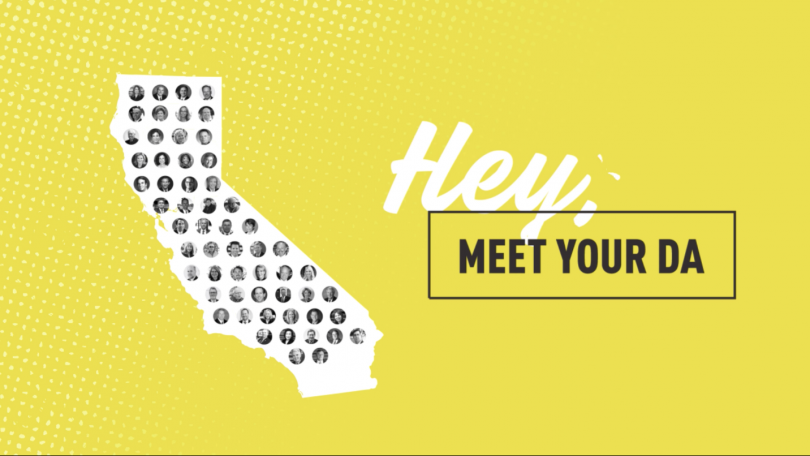 The American Civil Liberties Union (ACLU) of California launched a campaign this week called, “Hey, Meet Your DA!” that aims to increase transparency and inform the public of the powers held by local elected district attorneys, who are ultimately accountable to taxpayers, but often “out of step…with voters on criminal justice measures,” according to the ACLU.

There are 58 elected district attorneys representing each of California’s 58 counties. When law enforcement officers accuse someone of a crime, the District Attorney—not the police—decides whether or not to charge the individual. District attorneys also decide the severity of charges filed. “They alone decide who is deserving of a jail or prison sentence and who will instead be routed into a diversion program to help rebuild their life, or have charges dismissed,” according to the ACLU’s campaign website. DAs also play a major role in the controversial cash bail process, as their recommendations for bail carry more weight with judges than bail recommendations made by defense attorneys. Additionally, it’s the job of the District Attorney to hold local police accountable by investigating questionable officer-involved shootings and filing charges when necessary.

But DAs are not solely prosecutors. They also lobby the state in support or opposition to proposed legislation, policies, and budgetary decisions. And, with a few exceptions, most DAs fight against California voter-supported criminal justice reforms.

“District attorneys are among the most powerful elected officials in local government,” said Ana Zamora, the ACLU of Northern California’s Criminal Justice Policy Director. “The decisions they make impact the lives of millions of people, including families and entire communities.”

Through an interactive website, California residents can use their zip code to look up their local DA, read their profile, and email their DA directly. Visitors can also keep track of where their district attorney stands on important criminal justice reform issues in California.

“Many Californians may not know who their DA is or the role they play in the complicated ecosystem of the criminal justice system,” Zamora said. “We want to change this dynamic and it starts with introducing them to their locally elected DA.”

Musician John Legend recorded a video for the initiative (above), as part of his #FREEAMERICA campaign against mass incarceration.

In 2012, Proposition 36 reformed the state’s “Three Strikes” law, to only trigger an automatic sentence of 25-to-life if a person’s “third strike” offense was categorized as a violent or serious felony. While 69 percent of Californians voted in favor of the ballot measure, only three of the state’s 58 DAs supported Prop. 36. From the nine largest counties, just then-Los Angeles District Attorney Steve Cooley and Santa Clara DA Jeff Rosen publicly supported the measure. Outside of the nine counties, San Francisco DA George Gascón served as the Yes on 36 campaign co-chair. The California District Attorneys Association, and many of the state’s other prominent DAs, including San Diego DA Bonnie Dumanis and the now scandal-plagued Orange County DA Tony Rackauckas, publicly opposed the reform.

In 2016, 64.5 percent of voters passed Proposition 57. The new law, once fully implemented, will increase parole eligibility for non-violent offenders who have completed the base sentence for their primary offense, and boosts access to early release “good time” credits. Prop. 57 also takes the power to transfer kids to adult court out of the hands of prosecutors and gives the control back to judges. Only one DA in the nine largest counties supported Prop. 57: San Diego’s Bonnie Dumanis. Two DAs, Jeff Rosen in Santa Clara, and Nancy O’Malley from Alameda County remained neutral. Many of the other DAs “resorted to intense fear-mongering in an attempt to defeat the initiative,” according to the ACLU report.

Last year, a majority of California voters also legalized recreational marijuana use through Proposition 64. None of the state’s 58 DAs supported the proposition. “Again, several of the DAs utilized scare tactics to discourage voters from supporting the measure, without relying on any empirical evidence,” the report states. “Los Angeles District Attorney Jackie Lacey warned that Prop 64 would make it more difficult to convict someone for driving under the influence (DUI). Riverside District Attorney Mike Hestrin predicted that children and pets would start accidentally ingesting marijuana, that black market and gang activity would intensify,” and that there would be a significant increase car accidents.

“For decades district attorneys and prosecutors have been the primary drivers of America’s devastating mass incarceration problem, operating with little transparency,” said Bill Cobb, deputy director of the ACLU’s Campaign for Smart Justice. “This campaign is important, because it’s imperative that voters in California are equipped with the information and tools they need to effectively engage their district attorneys and know how to hold them accountable for problematic practices and unjust systems.”

Hope can be found inthe prosecutors both inside and outside of California who have stepped up as leaders in the criminal justice reform movement. (Earlier this month, for example, a group of 67 current and former elected prosecutors, Attorneys General, US Attorneys, and Department of Justice officials in more than 30 states urged the US 5th Circuit Court of Appeals to end cash bail for misdemeanor offenses in Harris County, Texas.)