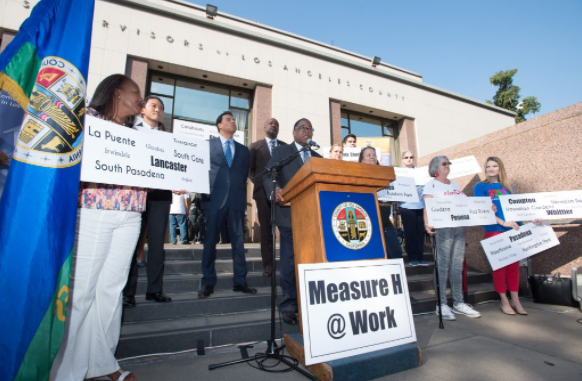 “Homelessness is the defining civic issue of our time and addressing it requires all hands on deck,” Los Angeles County Supervisor Ridley-Thomas said Tuesday in support of a motion to increase permanent supportive housing and much-needed services for the county’s expanding homeless population.

Supervisors Ridley-Thomas and Sheila Kuehl introduced a motion Tuesday to facilitate partnerships between LA County and all its cities to help homeless people access affordable housing from cities and, concurrently, wraparound services from the county and community-based partner organizations.

“By working cooperatively, efficiently and urgently, the County and cities are not only taking people off the streets but also putting them on a path to long-term stability and recovery.”

Through the board-approved motion, the county will provide supportive services for homeless individuals that access subsidized rental vouchers from their cities. The county services will include health care, mental health services, substance use treatment, case management, and job training to the residents who receive vouchers.

There are 88 cities and unincorporated areas within LA County. So far, Compton, Glendale, Long Beach, the City of LA, LA County, Pasadena, Pomona, and Redondo Beach have contributed over 2,000 housing vouchers for the county’s homeless.

“I think it’s fair to say the partnerships are region-wide, and … 2,000 homeless persons being housed in the next six months at the most is a significant down payment on what we wish to do…” Ridley-Thomas said. “This motion is but a template to allow us to do what we said we would do, to bring together, to solidify, these partnerships, and indeed, create more partnerships.”

Tuesday’s motion is part of an ongoing major push in Los Angeles to end the county’s homelessness crisis.

Last year, voters approved Proposition HHH, allowing the city to finance between 8,000-10,000 permanent supportive housing units for homeless residents over the next decade.

Then, in 2017, voters approved Measure H, a 10-year quarter-cent sales tax increase to be spent housing the currently homeless, preventing homelessness, and offering important services to the newly housed.

The measure is expected to help a total of 45,000 families and individuals rise out of homelessness, while protecting 30,000 others at risk of homelessness from becoming homeless during the first five years of implementation.

The number of homeless people in Los Angeles County skyrocketed 23% in 2017 over 2016, according to the LA Homeless Services Authority’s latest count. The number of young homeless people jumped even higher—64% for young adults between the ages of 18-24, and 41% for kids under 18.