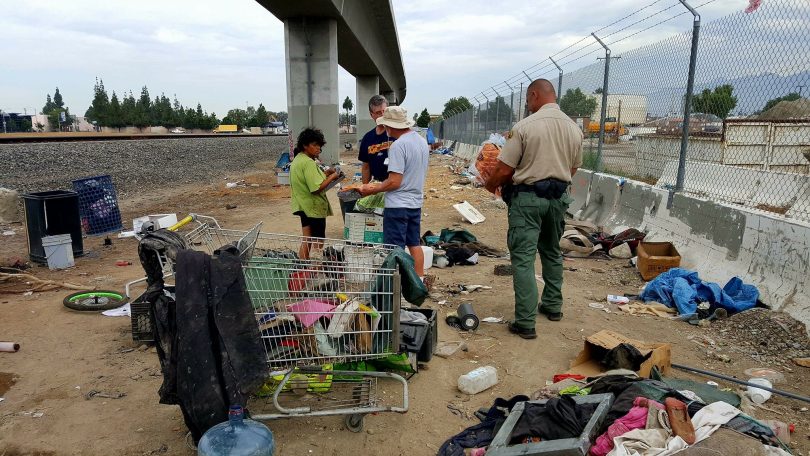 As volunteers hit the streets to embark on the annual, three-day Greater LA Homeless Count on Tuesday, the LA County Board of Supervisors took “urgent” steps to combat the county’s homelessness crisis by implementing a state council-created comprehensive “road map” to housing the homeless, by expanding law enforcement-based outreach teams, and by increasing funding for preventing homelessness among youth.

The council’s areas of focus included preventing homelessness by supporting renters, building affordable and supportive housing and shelters, and ending the cycle of homelessness and incarceration.

The council, which LA County Supervisor Mark Ridley-Thomas co-chairs with Sacramento Mayor Darrell Steinberg, called on state legislators to push through a constitutional amendment for the 2020 ballot that would create a legally enforceable mandate requiring local governments to develop new housing options for homeless residents.

On Tuesday, the supervisors unanimously voted to work toward implementing the council’s “road map” at the local level. The multi-pronged approach will be a “paradigm shift” for the county, according to Supervisor Ridley-Thomas, who authored the motion with Supervisor Janice Hahn.

“To date, neither moral grounds nor economic incentives have successfully moved Los Angeles County (County) closer to fully harnessing its resources and personnel to bring the County’s most vulnerable neighbors, who are interested in accessing services, inside,” the supervisors wrote in their motion.

The 2019 homeless count found 59,000 people experiencing homelessness, all but 25 percent of whom were living unsheltered.

According to the LA Homeless Services Authority, more than 30,000 of the county’s homeless residents have been assessed and found to be “willing to access housing services” once they become available, a fact that stamps out the harmfully inaccurate argument that homeless people are “service-resistant” or “shelter-resistant.”

It is this group of 30,000 people ready for immediate housing that the motion seeks to serve as quickly as possible. On Tuesday, the board took measurable steps toward this goal, including approving parking lot sites for 30 temporary trailers from Gov. Newsom, approving a Compton motel for interim housing, and moving to bid to purchase the bankrupt St. Vincent Medical Center to be used as a homeless service center.

“Bringing everyone in will require the full weight of our collective resources, our engagement, and our know-how,” said Ridley-Thomas.

Money for Keeping Youth Off the Streets and in Housing

This fiscal year, LA County will also receive a total of $65 million in one-time emergency aid from the state to spend on reducing homelessness in the county via Newsom’s Homeless Housing, Assistance, and Prevention (HHAP) program. A minimum of 8 percent of the pot must go to housing and services for youth struggling with homelessness.

Last year’s Greater LA Homeless Count showed that more than 4,000 transition-age youth (ages 18-24) experience homelessness on any given night in LA County, a startling 22 percent increase over the previous year. Twenty-nine percent of those youth reported that they had been involved with the child welfare system, and 62 percent reported prior contact with the juvenile or adult criminal justice system.

According to a July 31, 2019 report updated this month by the Los Angeles Homeless Services Authority (LAHSA), nearly 6,700 youth became homeless over the course of 2018 — a rate of inflow even higher than that of adults.

With the scope of the problem in mind, the supervisors unanimously approved a motion to increase the portion of the $65 million from HHAP to be used on keeping young people in housing from 8 percent minimum to 18 percent.

“Too many college students, foster youth, and other young people end up chronically homeless because they did not receive proper support and services early on in life. Today, LA County will change that trajectory,” said Supervisor Hilda Solis, who co-authored the motion with Supervisor Janice Hahn. “Providing young adults with housing is critical to their safety and will allow them to focus on school, employment, and other opportunities essential to a young adulthood.”

One of the ways in which the board moved toward expanding the county’s response to the homelessness crisis, was by voting to explore extending the LA County Sheriff’s Department’s reach into homeless communities.

The supervisors unanimously approved a motion from Supervisors Hilda Solis and Janice Hahn calling for several reports looking into how the county might fund an expansion of the LASD’s Homeless Outreach Services Teams (HOST).

The county had previously allocated a three-year pot of $6.6 million for HOST, but that funding period will be over at the end of this fiscal year.

The teams, which were created in 2017, are a critical arm of the county’s homeless services delivery system, Supervisors Solis and Hahn wrote in their motion.

The teams receive “First Responder Homeless Training,” and are praised for building rapport by responding to homeless individuals with dignity and kindness, rather than with handcuffs and citations.

“Experiencing homelessness is not a crime, and the HOST have an outreach-first, problem-solving approach that other law enforcement agencies have also adopted,” the supervisors wrote.

Supervisor Hahn said that she used HOST teams often in her district. “I started working with them on the Alameda Corridor when we had an encampment that was a public safety issue,” Hahn said. “With no drama, and no bad outcomes,” the teams successfully found placements for the homeless individuals “who were in danger next to those [railroad] tracks.”

Speaking before the board and county officials on Tuesday, a handful of formerly homeless people reported that HOST had helped them get into housing and connected them with crucial services.

Joseph Ramirez told the board that he had been homeless for 7 years when HOST intervened. “They have done a wonderful job,” Ramirez said. “I’m living proof … I wanted to quit many times.” But thanks to the members of HOST, Ramirez is now healthy, housed, and working. “Everything is going okay,” he said. “So I think you should give more leeway and support” to HOST.

HOST teams are deployed “when or where it is not possible for a non-law enforcement outreach team or homeless service provider to respond,” the motion states.

One woman had twice fallen into homelessness herself before founding a non-profit focused on supporting unhoused people in LA. She was glad, she said, that the sheriff’s department’s teams were able to go into the areas that she would not send her own volunteers because she feared for their safety.

But some advocates argued on Tuesday that the money shouldn’t go toward law enforcement — that community organizations and social service agencies, rather than the sheriff’s department, should be the primary point of contact between homeless people and services.

The Youth Justice Coalition’s Kim McGill said that the county should not send more money to the sheriff’s department. The LASD, she said, should not be “the lead outreach team to connect with people living on the street.”

LAHSA teams had been out multiple times to clean the alley where homeless individuals reside in her neighborhood, spending hours connecting people with healthcare and treatment, said McGill. When LAHSA leaves, the alley is clean and no one is displaced. By contrast, when law enforcement has come to clean the encampment, she said, they have come “with bulldozers and dump trucks” to “clear out the alley.”

Andrés Kwon, Policy Counsel and Senior Organizer at the SoCal ALCU told the board that the HOST expansion plan was “at odds” with the recommendations of the county’s Alternatives to Incarceration Workgroup, which called for a community-based infrastructure.

Supervisor Sheila Kuehl, too, expressed concern that expanding HOST might not be the best use of county funds or the best way to help homeless Angelenos. Kuehl called for an amendment focused on gathering “good solid data” from the sheriff’s department about HOST’s outcomes, but Solis declined the addition.

“It is important not to add to the HOST program until we understand what the outcomes are,” she said, beyond the cheering stories of “very good people doing good work.” That is “different from investing millions of dollars in expanding a program where we don’t have data.”

“I would really like us to concentrate on getting some outcome information from this program,” Kuehl said, “just as we demand from every other program that we fund.” Kuehl said that waiting until “a later moment in the budget cycle” would also be useful in that it would allow the supes to “actually see what money” the county would receive from the state’s pot of money for prison realignment (AB 109).

Solis agreed that outcome information was important, but did not agree with Kuehl that the supervisors should wait to look into funding until a later point in the budget process.

“Bear with me, Sheila — I’m working on it. It’s a report back,” Solis said in response. “We are not coming up with a figure right now … we are looking at available funding during the final phases of the county budget process.”

“I agree we need to have data if we move forward, but I think that it’s important for us to at least begin with the report back,” Solis said.

Solis and Hahn’s motion seeks information on how the county can “track outcomes such as connecting and individual successfully to homeless services and housing,” but does not specifically request the outcome data prior to launching the search for funding.

Specifically, the motion calls for several reports back from the county CEO and relevant county departments and agencies regarding what budgetary funds could be allocated for expanding the HOST system and adding more full-time team members, how training for the HOST teams might be enhanced, and in what ways the contract could be changed to “increase flexibility” for how the HOST funds could be used.

“HOST is currently over-extended, and it has become challenging to meet the increasing demands for outreach and calls for service countywide,” Solis and Hahn concluded in their motion. “As the Board continues to take action to tackle the homelessness crisis, the Board must also ensure that HOST, as well as each component of the County’s homeless services delivery system, is adequately staffed and funded.”

Image of HOST at work courtesy of the Los Angeles Sheriff’s Department.