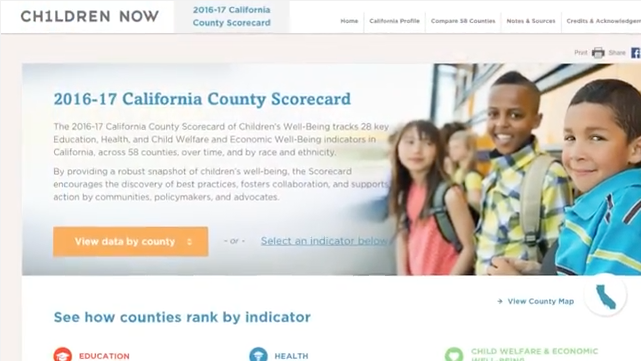 A report from the advocacy group Children Now takes a county-by-county look at children’s well-being in California through 28 health, education, child welfare, and economic indicators.

According to the scorecard, approximately 81% of children exited to permanent homes within three years of entering the child welfare system in Los Angeles, San Bernardino, San Diego, San Francisco, and Santa Clara Counties. For all five counties, this was a drop in permanent placements from the previous year, and 3% lower than the state average.

Statewide, just over three quarters of foster kids between the ages of 12-17 are living in “family-like settings.” Nearly a quarter of kids in the child welfare system are in group homes, transitional housing, and shelters.

Other data collected by Children Now paints a bleak picture of kids’ educational well-being in the state. For example, only 12% of California kids from low-income households have access to state-funded after-school programs.

Just 27% of black third graders and 31% of Latino third graders can read at grade level, compared with 60% and 67% of their white and Asian peers.

One bit of good news is that California’s school districts have made progress toward eliminating harsh school punishment. Sixty-nine percent of suspensions were limited to serious offenses, rather than willful defiance—up from 57% of suspensions the prior year.

“Leaders across California need to take a hard look at the Scorecard data and work together on policy solutions to improve the well-being of children,” Children Now President Ted Lempert said. “We need to invest more in quality early childhood programs, increase access to the health screenings and quality mental, oral and physical health supports that children need, and make sure that all kids, especially kids of color, have access to excellent schools and teachers from the very start.”

Head over to the scorecard for more county-by-county rankings, which can be sorted by county or by any of the individual well-being indicators which include “Three- and four-year-olds who attend preschools,” “Twelfth graders who graduate on time,” “Children who have health insurance for the entire year,” “Schools that have a health center,” and, “Students who are low income and eat free or reduced price meals.”