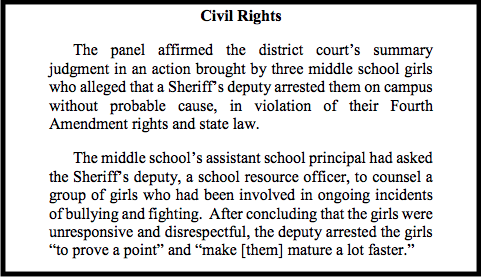 In a Monday ruling, the Ninth Circuit Court of Appeals said that San Bernardino County sheriff’s deputy Luis Ortiz violated the rights of seven middle school girls whom he arrested to “prove a point,” and to “make [them] mature a lot faster.”

On October 8, 2013, Balbina Kendall, an assistant principal at Etiwanda Intermediate, a middle school in Rancho Cucamonga, asked Ortiz, a school resource officer, to counsel the seven 12- and 13-year-olds, who had been accused of bullying and fighting each other, punching, and pulling hair inside and outside of school. The group reportedly contained both kids who were initiating the fighting, as well as the kids who were targeted by the bullying.

School administrators placed the girls in a classroom to wait for Ortiz. Within a few minutes of meeting with the seventh-graders, Ortiz declared them to be disrespectful and unresponsive—based on “body language and continued whispering among the girls”—and thus, apparently, deserving of arrest. An audio recording of the meeting “reflects mostly silence in response to Deputy Ortiz’s questioning,” however. None of the students can be heard “speaking loudly or being verbally disrespectful,” Judge Jacqueline H. Nguyen wrote in the opinion.

Ortiz informed one middle schooler that was “laughing, that thinks it’s funny” that he was not, in fact, “playing around.” The deputy then said that arresting the girls and taking them to jail was the easiest way to “prove a point” that he was not “playing around.” The arrest would “make them mature a lot faster,” Ortiz said. “Eventually maybe you guys will make it into high school, then I will have to deal with you even more.”

“To me, it is the same, same ticket, same pair of handcuffs,” Ortiz told the girls.

Ortiz said he was arresting the seventh graders for violating CA Penal Code section 415 by unlawfully fighting. After the school resource officer called another deputy for backup, the two officers cited and handcuffed each girl. The deputies drove six of the seven girls to the sheriff’s department in patrol cars. One girl was released to her father on campus.

The school ultimately did not discipline the girls, and no criminal charges were filed against them.

After the arrest, David Scott, Angelica Santana, and Dejah Hall, parents of three of the middle-schoolers, sued the deputy, San Bernardino County, the school district, and other officials.

On Monday, the three-judge 9th Circuit panel affirmed a lower court’s summary judgment in favor of the girls’ claim that they were falsely arrested, as well as the lower court’s denial of qualified immunity for Ortiz.

The appeals panel found that the arrest was unreasonable and unjustified. Arresting, handcuffing, and transporting the group of girls to the sheriff’s station was “a disproportionate response to the school’s need, which was dissipation of what the school officials characterized as an ‘ongoing feud’ and ‘continuous argument’ between the students.”

“No reasonable officer could have reasonably believed that the law authorizes the arrest of a group of middle schoolers in order to teach them a lesson or to prove a point,” Judge Nguyen said in the opinion. Arresting a middle schooler, Nguyen wrote, “cannot be justified as a scare tactic, a lesson in maturity, or a chastisement for perceived disrespect.”

The judges also agreed that Ortiz had insufficient evidence to arrest the girls for fighting under Penal Code 415, which does not apply to school grounds.

Peter Bibring, ACLU of Southern California senior staff attorney and director of police practices, blasted Ortiz’s “outrageous” actions on Twitter. “But when school districts put police & sheriffs in schools, this is what happens: they start to use those officers—and the criminal justice system—for ordinary issues of school discipline.”