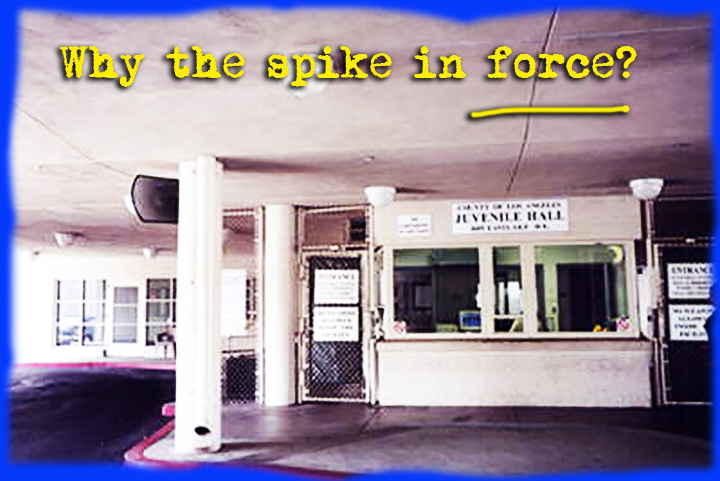 USE OF FORCE IS UP LA COUNTY’S JUVENILE HALLS

According to probation officials, who were asked to report to the LA County Probation Commission about how often force was used on the kids housed in the county’s three juvenile halls, such force incidents have risen sharply since the beginning of the year.

Both the members of the Probation Commission and the LA County Board of Supervisors have asked Probation higher-ups to come up with data on the agency’s force incidents in its juvenile facilities.

Earlier this month, the LA County Board of Supervisors voted unanimously to review three years of “critical incidents” that have taken place in the county’s juvenile halls and probation camps. The motion, written by Supervisor Mark Ridley-Thomas, also requests information on how internal investigations of such force incidents are handled and how staff are disciplined following critical and non-critical incidents.

The pressure on Probation rose after WitnessLA broke the story of the alleged beating of an unresisting 17-year-old by staff members at Barry J. Nidorf Juvenile Hall in Sylmar.

The LA Times’ Abby Sewell broke the news about the information made public at last Thursday’s Probation Commission. Here’s a clip from her story:

Overall, monthly use of force incidents increased by 85%, from 55 to 102, at the three county-run juvenile halls — Central Juvenile Hall in Boyle Heights, Los Padrinos Juvenile Hall in Downey and Barry J. Nidorf Juvenile Hall in Sylmar — from January to July, statistics released Thursday by the L.A. County Probation Department show.

Each camp holds about 200 youths awaiting court action in their cases or transfer to other facilities.

The total number of force incidents remained relatively stable early in 2016 and dipped slightly in March, but spiked in June and July.

Probation officials who presented the statistics at a probation commission meeting Thursday said any time a staffer places hands on a youth, including to break up a fight between minors, a use-of-force report is triggered.

Department spokeswoman Kerri Webb said there could be “a variety of reasons” for the overall increase.

“While we do regularly review these incidents, we’re assessing this specific information to identify the reasons for the fluctuations,” she said in an email. “It’s too soon to know now what the results of the analysis are.”