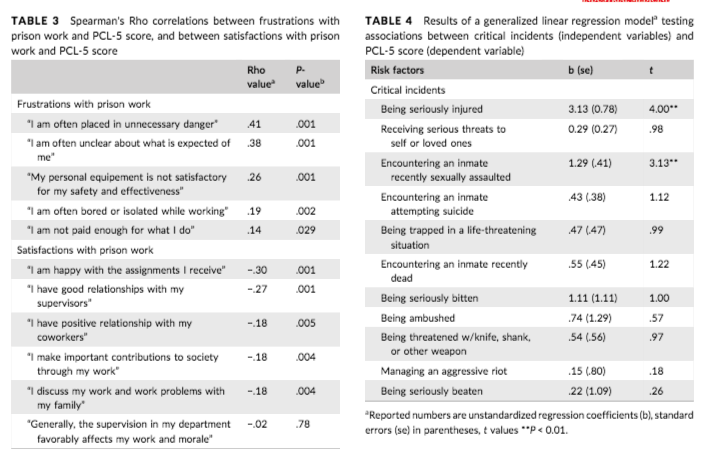 Prison employees experience Post Traumatic Stress Disorder at a rate that is similar to Iraq and Afghanistan war veterans and higher than police officers, according to a study by researchers at Washington State University and the University of Alabama-Birmingham that was recently published in the American Journal of Industrial Medicine.

The researchers sent surveys to each of the approximately 2,000 members of the union representing WA state prison workers. A total of 355 Washington State Department of Corrections staff, including guards, counselors, medical practitioners, and other staff, responded and participated in the study.

A total of 19 percent of the survey respondents met the criteria for a PTSD diagnosis—a rate that is six times higher than that of the general public, according to the report.

In comparison, approximately 11-20 percent of Iraq and Afghanistan war vets, and 30 percent of Vietnam veterans have experienced PTSD, according to the report.

“The violent and chaotic nature of prison work has been show to negatively impact prison employee physical health, mental health, sleep, personal life, and general wellness,” the researchers stated in their report. “[Prison employees] consistently face inconsistent and long work hours, challenging and confrontational workplace interactions, uncertain job responsibilities, violence, trauma, and threats to their personal safety. Yet despite these well-established problems, the prevalence, causes, and insulators of PTSD among prison employees have not been well studied.”

Although research on PTSD among correctional officers is still relatively rare, this study isn’t the first to look at the issue. A 2013 report from Desert Waters Correctional Outreach found that 31 percent of guards in correctional facilities suffer from PTSD. (The Desert Waters report looked specifically at guards, rather than all prison staff.)

The recent Washington State/University of Alabama report found that factors like exposure to critical incidents corresponded with higher PTSD diagnosis checklist scores. Events like “being seriously injured,” and “encountering an inmate recently sexually assaulted” strongly correlated with higher PTSD scores. Other PTSD-connected incidents included “receiving serious threats to self or loved ones,” and “encountering an inmate attempting suicide.”

Workers who reported being “often placed in unnecessary danger,” and being “often unclear about what is expected” of them in the course of their jobs, also had higher PTSD scores.

The findings line up with a a 2016 study, which revealed that police officers’ exposure to critical incidents was “statistically significantly correlated” with drinking and PTSD. Those officers that had experienced a higher number of critical incidents were more likely to report having symptoms of PTSD and consuming alcohol.

As with war vets, shame and stigma often deter corrections officers and other law enforcement officers from seeking treatment for PTSD and other mental health needs.