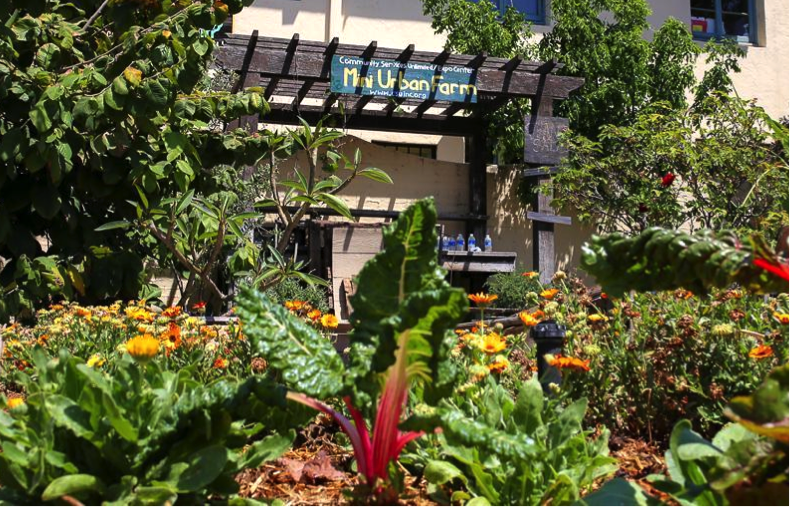 These crops sprouting from earth surrounded by busy streets and strip malls demonstrate how urban environments can be redesigned—with food justice at the center—to help dismantle the cradle-to-prison pipeline.

Cristian Marroquin is familiar with the struggle to find healthy food or green space in South LA. He grew up here, and that’s why his work with local kids at the farm really hits home.

CSU has placed food at the center of its work in South Los Angeles since 1977, when the nonprofit branched off from the Black Panther Party. Today, the organization continues the legacy of the Black Panthers by not only providing food to underserved communities, but by viewing food as a powerful community-building tool to nourish, organize and activate marginalized populations.

The more kids are exposed to real food, “they learn you don’t have to be content with what you see in front of you,” Marroquin said.

From the Ground Up offers high school students an opportunity to improve their communities through food justice. While many kids join simply to get out of the house, Marroquin said that the program has a higher aim.

“What we’re trying to do is give them something to be a part of—we build connections and social change through food,” he said.

Many factors that put youth at risk of delinquency and detention are beyond their control. Community-level issues such as poverty, racism, and unequal access to quality health care and education are all elements of the cradle-to-prison pipeline that help push minors into the juvenile justice system each year.

This is why some youth advocates are approaching juvenile crime prevention differently, by redesigning their communities — and getting kids to help. A From the Ground Up intern prepares a seedling table during a community event at CSU’s Paul Robeson Center.

“There are programs for high-achieving kids in underserved neighborhoods and programs for system-involved youth, but nothing for the kids in the middle,” said Neelam Sharma, executive director of CSU. “They, too, need something to hope for.”

Black youth account for 7.5 percent of the total youth population in LA County, yet comprised more than 21 percent of felony juvenile arrests in 2015.

According to Feeding America data from 2014, one in four children in LA County live in a food-insecure household. Again, youth of color are overrepresented. Black and Latino youth are twice as likely to be food insecure than children in white households.

The same populations that are disenfranchised by the criminal justice system are targeted by the industrialized food system.

A Centers for Disease Control and Prevention assessment found that only eight out of every 100 food retailers in South LA sell healthy foods, such as fruits and vegetables, low-fat dairy items, meat products and whole grain foods.

The health impacts of this geographic disadvantage are clear: according to the LA County Department of Public Health, 30 percent of children in South LA are obese, compared to just 11 percent in the Pacific Palisades.

Beyond the devastating and stifling effects of obesity and other diet-related illnesses, when children consume mostly processed foods they miss out on vital nutrients that promote brain function and mental health.

Several studies have linked poor nutrition in childhood to the externalization of aggressive, antisocial and hyperactive behaviors in adolescence.

To explore this linkage, researchers at the University of Oxford conducted an experiment of male inmates at a juvenile detention facility. In this double-blind study, one group of participants was given a nutritional supplement, as an analog for a better diet, and the other group a placebo. Participants who received extra nutrients ended up committing 37 percent fewer serious or violent offenses in detention.

So when kids act out in school, they are quick to be punished or even criminalized, but some wonder if there is a connection to their diet.

“What have they been eating? Hot Cheetos and Pepsi?” asks Analena Hope Hassberg, CSU board member and assistant professor of ethnic and women’s studies at California State Polytechnic University, Pomona.

With these linkages in mind, Hassberg stresses the importance of connecting youth to education, food and their community.

“Once you build those connections, you think twice about hurting the community,” she said.

When youth have access to food, open spaces, and meaningful work, they are nurtured by their environment, rather than criminalized.

Urban Sprouts, an organization in South San Francisco that helps underserved youth build just and equitable communities through garden-based education, operates a program for high school students that teaches kids all the skills needed to run their own farm-fresh enterprise, from seed to sales.

In this context, Urban Sprouts Executive Director Audrey Roderick said that gardens teach kids about more than just the circle of life.

“The garden is the medium that drives home a message of pride, ownership, and self-efficacy,” Roderick said.

She said that garden-based initiatives work because they require youth to engage with the environment and interact with their peers, teachers and the community

“We understand the power of these spaces to make these connections,” Roderick said.

D’Artagnan Scorza, founder and executive director of the Social Justice Learning Institute (SJLI), said that he’s seen the power of gardens when working with trauma-exposed youth and men with prior gang involvement. One man told Scorza that when he was working the land, he felt able to deal with his anger.

“Physically putting their hands in the soil transforms how they see themselves and the world,” Scorza said. “It provides a space for them to heal.” FGU interns plant a bed they have prepared at the CSU/EXPO mini-urban farm.

In South LA, CSU’s Marroquin reflected on the transformations he has observed in the more than 200 kids he’s guided through From the Ground Up. He said the most noticeable changes are in their confidence levels, like the difference he saw in a young woman from Guatemala.

“She was very quiet, hardly said anything, mainly because she had trouble speaking and translating, but soon after the program began she started talking and talking,” Marroquin said. “Even her mother commented on how much she opened up.”

The federal Office of Juvenile Justice and Delinquency Prevention identified a number of youth crime prevention programs as “effective” or “promising,” but of the 249 programs identified, only one includes nutrition and physical activity components.

Urban Sprouts attempted to bring its programming to youth in detention through a partnership with the San Francisco Probation Department. According to Executive Director Roderick, though, the structure of the institution was in conflict with the program’s methods, which rely on building deep connections to the earth and all aspects of one’s own community.

The camp is staffed by guards, there for security, who are unable to participate in the program.

“This creates a strange dynamic,” Roderick said. “It would be helpful to see guards work side-by-side with the students.”

What ultimately brought an end to the partnership was the department’s lack of buy-in.

“They really wanted a beautiful functioning farm, but did not understand the work (and money) that goes into it,” Roderick said.

CSU’s Executive Director Sharma is familiar with the instability of funding for community-based programming. In her experience, investments tend to be made in whatever projects address the hot-button issue of the moment, but money dries up when the next big solution arrives, or focus shifts to another issue.

A healthy food environment alone will not eradicate youth crime. But the good work being done by CSU, the Social Justice Learning Institute, Urban Sprouts and other such organizations could be amplified with support from local governments.

When asked how the City of Los Angeles could help CSU and From the Ground Up, Marroquin had a simple response: “recognition.”

This story originally appeared on The Chronicle of Social Change.

Gabrielle Tilley is a graduate student of public policy and a passionate advocate for change. Prior to her candidacy for Master of Public Policy at the University of Southern California, she served two AmeriCorps VISTA terms with the Anti-Hunger and Opportunity Corps. She wrote this story as part of USC’s Media for Policy Change course.