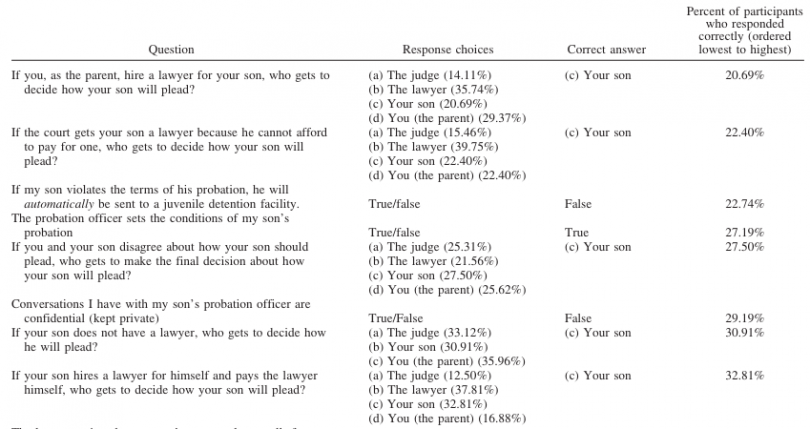 Kids who commit first-time crimes have a higher likelihood of reoffending when their mothers do not actively engage in their kids’ cases and the legal process, according to a Michigan State University study published in the journal Psychology, Public Policy and Law.

Researchers interviewed a sample of 324 justice-system involved teens in Orange County, CA and Philadelphia, PA and their 324 mothers (or female guardians).

The kids had been charged with offenses such as simple assault, theft, and vandalism. Researchers interviewed the teens within six weeks of their first arrest, and again, a year later. Mothers were interviewed approximately six months after their children’s initial interviews. (The study sampled mothers rather than fathers because mothers were far more likely to be present in their children’s lives. A total of 85% of the youth sampled listed a female as their primary guardian.)

The mothers took a 44-item questionnaire testing their knowledge about the juvenile justice system, and on average, answered only 66% of the questions correctly.

For example, only 21% of the moms knew whether their son, the defense attorney, the judge, or the parent gets to decide how their son would plead.

According to the test, 43% of mothers believed that after an arrest, police have to wait until parents arrive at the station to question minors. Fifty-seven percent of the moms inaccurately identified public defenders as a lawyer who represents the victim of a crime.

Many mothers were also unclear about the terms of juvenile probation. Seventy-one percent of participants incorrectly believed that conversations parents have with their child’s probation officer are confidential, and when asked whether their son’s probation officer sets the conditions of probation, just 27% of mothers correctly answered “True.”

And mothers who knew less about how the justice system works were less likely to participate in their kids’ legal process. The boys whose mothers were not engaged in the process, were more likely to reoffend.

“When you think about a 14-year-old boy who is arrested and charged, he can’t drive himself to the many hearings and court dates he needs to attend. He’s also not old enough to have a legal job, so he can’t afford the fees and fines he may have to pay,” researcher Caitlin Cavanagh said. “So these youth are literally dependent on their parents, not just for emotional support or guidance, which is important, but simply to complete the requirements of their probation.”

The study was led by Cavanagh, an assistant professor at MSU’s School of Criminal Justice and Elizabeth Cauffman, a Professor of Psychology and Social Behavior, Education and Law at UC Irvine’s School of Social Ecology.

The study calls for improvements to the way the juvenile justice system educates and engages parents.