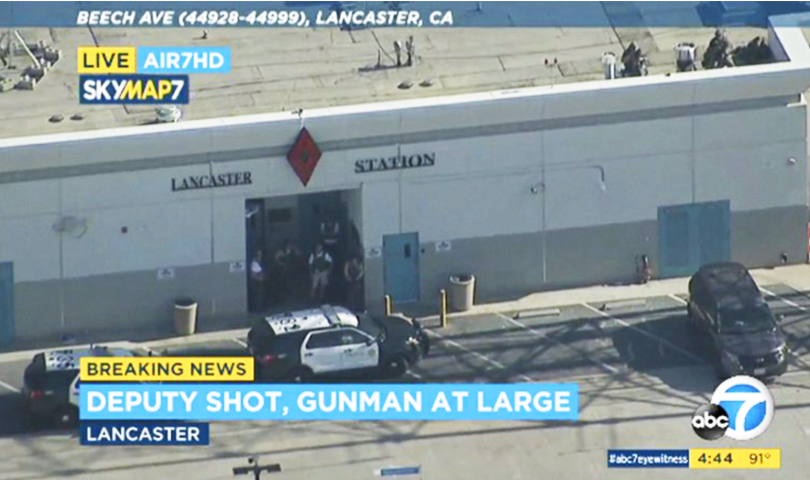 by Eric Rose and Thom Weidlich

Slightly over two weeks ago, a deputy-trainee at the Los Angeles County Sheriff’s Lancaster station radioed that he had been shot twice by a sniper from an apartment building across the street from the station building.

A massive search was initiated immediately following the alarming report that someone had targeted a deputy in the middle of the day in the station’s parking lot. Hundreds of law enforcement officers from multiple agencies responded to the call to search for the suspect who was still reportedly at large.

We know now, of course, that deputy Angel Reinosa’s claim of being hit twice by the bullets of an unidentified shooter turned out to be a lie.

From what we have learned of the probe into what happened that day, it is clear that the department personnel handling the investigation did an excellent job. The investigators were very detailed in their work and allowed themselves no preconceived notions about the incident. They let the evidence (or lack thereof) guide their efforts.

At the same time, when it came to the way the LASD leadership handled their communication to the public about Reinosa’s false claims, they squandered the opportunity on several fronts — timing, thoroughness, and transparency.

While it might be understandable for the LA County Sheriff’s Department not to reveal all they knew while they were still investigating the shooting that didn’t happen, they waited three days to  level with the public — in even the most general ways — about what those at the senior command staff levels of the LASD clearly understood, in less than 24 hours, to be a hoax.

As a result, the Sheriff’s department caused the public and media to feel distrustful and angry toward their sheriff’s department for deceiving them for approximately 72 hours about what initially sounded like a serious threat to public safety, which sheriff’s officials knew fairly early on actually didn’t exist.

For those of us who advise companies and organizations on communicating with the media and public during a crisis, the LA County Sheriff’s Department’s performance has been an excellent example of how not to do it.

A cardinal rule of crisis communications is to get out the truth as you know it, as soon as reasonably possible, so half-truths and rumors don’t carry the day, producing public distrust.

The hoax generated a massive amount of local, national, and even international media coverage that should have shown the department handling a difficult and perplexing situation with skill, care, and transparency. Yet, because of the department’s reticence to level with the public, instead, the LASD looked devious and secretive, which wasn’t necessary.

The matter of the Lancaster shooting hoax can, however, be a lesson for all government agencies and other companies and organizations that have to speak to the public and the media during a crisis. This is especially true of law-enforcement agencies, which simply cannot function without the respect and support of the communities they serve.

To further illuminate what we mean, let’s review the details of the Lancaster shooting fabrication.

On Wed., August 21, at around 3 p.m., the news broke that a Los Angeles County Sheriff’s deputy had been walking to his car in the parking lot of the department’s Lancaster sheriff’s station when a sniper opened fire, hitting the 21-year-old deputy twice in the shoulder. (Lancaster is a city in northern reaches of Los Angeles County.)

After the initial announcement, the department further kept the public informed with about a half dozen tweets.

“Active scene please stay away from area,” it said in the first tweet, at 3:21 p.m. At 8:11 p.m., another tweet referenced “the contemptible assault on Deputy Reinosa.” At 9:17 p.m., that same day, the department thanked the public via Twitter for its “thoughts and prayers.”

The next morning, and for much of the next day, there was nothing more about a suspect who was brazen enough to target a sheriff’s deputy during working hours, shooting him twice at the sheriff’s station where he worked.

Then, on Thursday afternoon, the department issued a press release about the ongoing investigation, which still suggested that the sniper was real, leading media outlets to report the department’s statements that the danger to the public was still very genuine, reinforcing the perception that Reinosa could have been very seriously injured or worse, by an as yet unapprehended gunman, had it not been for good luck and the deputy’s protective vest.“The deputy sustained a non-penetrating wound to the top of his right shoulder that left a minor injury,” it stated.

The press release never mentioned that the department had already halted their search for the suspected gunman, or that homicide detectives were being assisted by forensic experts, and that the only person they now suspected was the deputy himself.

We know now that as soon as Wednesday night, and during the day on Thursday, August 22, reporters heard from department-related sources that those in charge at the department, including the sheriff, realized fairly early that the shooting was a hoax. Several claims from Deputy Reinosa’s did not add up.

For one thing, there was a complete lack of physical evidence. There was not a single 911 call reporting that anyone heard gunfire, let alone shots from a high powered rifle. The deputy was too calm, and the details he broadcast were bizarrely detailed, including his mention of two holes in his shirt, which investigators thought looked self-made and not a product of gunfire. Finally, when the deputy was at the hospital for treatment, doctors found no real injuries.

A couple of radio outlets, and WitnessLA, reported that deputies became suspicious only hours after Reinosa claimed to be shot.

In short, if the department knew on Thursday the shooting was almost certainly a hoax, why did it send out a press release Thursday afternoon that still treated the fake shooting as if it were real?

After the misleading press release came two days of radio silence before, finally, at 9:39 p.m. Saturday night, the sheriff’s department hastily announced an 11 p.m. press conference, which would provide updates on the shooting investigation.

That 11 p.m. news conference scheduled at the last possible minute on a Saturday night, rightly or wrongly, could not help but look like an attempt to break— and quickly bury — the news about the deputy’s deception.

Homicide Capt. Kent Wegener was informative, explaining how Reinosa had just that day confessed his duplicity and that he “told investigators he had caused the holes in his uniform by cutting it.”

While Wegener was reassuring with his fact-based presentation, it was glaringly noticeable that Sheriff Alex Villanueva did not appear at the presser, and that no one at the department bothered to explain his absence.

Then when Assistant Sheriff Robin Limon spoke in the sheriff’s place, she mostly said the department was “very disappointed,” by Angel Reinosa’s actions, yet offered no explanation about the LASD’s own earlier deceptive messaging to the public.

In what appeared to be an attempt to fix that gaff, four days later, the department announced another press conference for Wednesday morning, September 28, a week after the faux shooting, promising “major update” on the investigation.

The “major update” turned out to be that Villanueva had fired Reinosa — something that everyone knew would happen to any deputy who fabricated a shooting.

The sheriff also told reporters he “couldn’t” be at the Saturday night press conference, but gave no explanation as to why he skipped it.

The press conference was uncharacteristically brief and featured a member of the sheriff’s staff who tried to make it even shorter by hustling Villanueva off camera before reporters could ask any substantive questions. (Villanueva wisely waved him away.)

“You can’t have reporters come down for a ‘major announcement’ and then try to cut off the press conference a couple of questions in,” NBC reporter Andrew Blankstein, tweeted afterward.

Villanueva has said repeatedly that “transparency is vital for public trust.” He is right, of course.

Unfortunately, the LASD’s handling of what turned into a nationally reported hoax that was not of its making, and that was investigated quickly and professionally by its detectives and other department members, turned out to be an unnecessary fail on the “vital” transparency front.

Eric Rose is a partner at Englander Knabe & Allen and is a nationally recognized crisis, reputation, and communications expert.  Thom Weidlich is a Managing Director of PRCG Haggerty specializing in litigation communications, crisis management, and media relations.