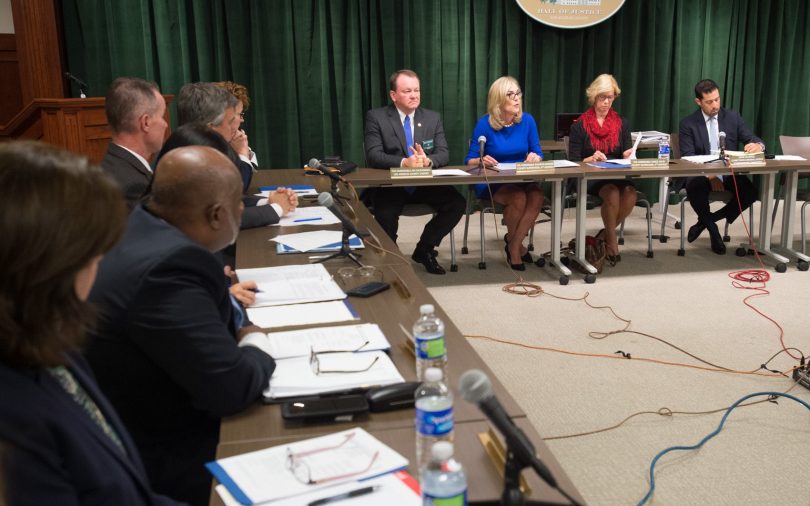 The motion to create the blue ribbon commission was inspired by another motion from February seeking information regarding the death of Whittier police officer Keith Boyar, who was fatally shot on Feb. 20, by Michael Mejia, a repeat probation-violator.

At that time, Mejia was under the supervision of the LA County Probation Department and had been in and out of lock-up, reportedly serving two 10-day stints most recently, for violating the terms of his release. Before that, Mejia spent time in prison for robbery and for car theft.

After the shooting, law enforcement leaders, including Whittier Police Chief Jeff Piper and LA County Sheriff Jim McDonnell, blamed Mejia’s freedom—and Boyar’s death—on recent criminal justice reform laws. The supervisors called for a report to determine whether the murder was in any way connected to state reforms. Afterward, the supervisors chose not to release information about the case to the public.

One of the three laws that the commission will focus its attention on is 2011’s AB 109, which shifted the incarceration burden for certain low-level offenders away from the California’s state prison system—the largest in the nation until recently—to the states’ 58 counties. The second law is 2014’s voter-approved Proposition 47, which downgraded six low-level drug and property felonies to misdemeanors. The money saved by Prop. 47 is earmarked for mental health services and drug rehab programs for criminal justice system-involved people, efforts to reduce truancy and help at-risk students, and for victims services. The newest law, Proposition 57, once fully implemented, will boost access to early release “good time” credits for eligible inmates who participate in education and other rehabilitative opportunities. Prop. 57 will also increase parole eligibility for non-violent offenders who have completed the base sentence for their primary offense, and will take the power to transfer kids to adult court out of the hands of prosecutors and gives the control back to judges.

The commission will, among other tasks, conduct “a focused study of randomly selected “very high risk” AB 109 Post-Release Supervised persons to identify successes and challenges of supervision,” and conduct ” an analysis of the top 100 misdemeanants under Prop 47 with the highest recidivism rates and providing recommendations to improve rehabilitative services as well as options for detention.” It will also work to develop a matrix to calculate the recidivism rate for people released under Prop. 57. The commission will report back to the board every 90 days, and present a final report at the end of one year, at which point it will sunset.

The first meeting focused on administrative and planning tasks, including establishing a schedule, potential workgroups, and identifying data and presentations that might help the commission complete its objectives. The commissioners also selected the Association for Los Angeles Sheriff’s Deputies (ALADS) Vice President Robert Sass to fill an empty seat on the commission reserved for a labor-law enforcement representative.

Supervisors Kathryn Barger and Janice Hahn, were able to get their motion to create the blue ribbon commission approved with a third vote from Supe. Hilda Solis, despite objections from LA’s community advocates, including representatives from Homeboy Industries, the Youth Justice Coalition, Community Coalition, Californians for Safety and Justice, and a New Way of Life.

These groups spoke out against the creation of the commission, arguing that forming a “law enforcement-heavy” commission based on the murder of a police officer was not the best starting point for assessing criminal justice reforms and improving outcomes for people exiting lockup. Opponents also argued that the board should have spent some time gathering public input before presenting the motion.

Now, all five supervisors have selected two appointees each. In addition to the 10 appointees, the commission’s other members include LA County Chief of Probation Terri McDonald, and Peter Espinoza, the director of LA County’s Office of Diversion and Reentry, and Alameda County Public Defender Brendon Woods, as well as a number of other notable officials of LA County departments. (Read the rest of the roster: here.)

Supervisor Barger appointed Mark Holscher, a former Assistant United States attorney who is now a partner at Kirkland & Ellis, LLP, and Stephen Larson, who has served nearly 30 years as a federal prosecutor, a federal district judge, and finally, as a criminal defense attorney, and as a partner in the Los Angeles law firm of Larson O’Brien LLP.

“I am honored that both of my appointees are active community leaders who will offer their extensive legal experience in shaping the important work of the Blue Ribbon Commission,” Barger said. “Their perspective will help the Commission create a roadmap for the County to improve public safety while supporting those who require rehabilitative and other services which impacts the well-being of our local communities.”

Moriguchi serves as a lieutenant in the LA County Sheriff’s Department, and as the president of the Professional Peace Officers Association (PPOA). Moriguchi is also a member of the California Committee of the US Commission on Human Rights.

“Lt. Moriguchi will bring the important perspective of law enforcement to the Blue Ribbon Commission,” Hahn said. “His years of personal experience give him the ability to discern what will work and what won’t while the commission examines creative solutions to keep our communities and our law enforcement officers safe.”

Kyle is a community advocate at Reverence Project and an organizer at Common Sense Kids Action.

“Jamie Kyle is a longtime community advocate and organizer,” Hahn said. “As an advocate for criminal justice reform, victim’s rights, and a victim of crime herself, she has a unique and nuanced experience. She knows her community and will be an asset to the commission.”

Kyle is the daughter of Aqeela Sherrills, a former Grape Street Crip who was one of the architects of the Blood-Crip truce of 1992. Sherrills was well-known for his work in violence prevention by 2004, when his son—Kyle’s brother—Terrell, was murdered in a minor dispute at a party, while home on vacation from college. Recently, Sherrills has been working with Californians for Safety and Justice, one of the main groups behind Prop. 47.

Bibring serves as a senior staff attorney, as well as the director of police practices, at the ACLU of Southern California, where he focuses on policing issues like excessive force, race and bias in policing, gang injunctions, and civilian oversight. Before he joined the ACLU in 2006, Bibring worked in private practice, as a civil rights and workers’ rights attorney.

In 2014 the lawyer launched a free legal clinic for homeless people facing status-related charges. (Cities have come under fire for using certain laws to criminalize homeless individuals, including bans on living in vehicles, public camping, loitering, and sitting or lying down in public.)

Kuehl was absent from the meeting in which the supervisors voted to create the commission.

Supervisor Mark Ridley-Thomas—who abstained from voting on the creation of the commission, after asking the board to continue the motion so that it could be reviewed by County Counsel—selected Karren Lane and Josh Green as commissioners.

Lane is from the non-profit Community Coalition, and works to influence criminal justice policy and increase access to re-entry services in South LA.

Green is a staff attorney and Criminal Justice Program Manager at the Urban Peace Institute. His work focuses on the negative effects that gang injunctions have on communities in LA County. Green also co-leads the Ramona Gardens Safety Collaborative, which aims “to build the capacity of residents and community-based organizations to increase community safety and develop the necessary resources to address the needs of families in the housing development,” according to the Urban Peace Institute.

“The framework for this commission is flawed and reactionary.”

Ocen is a criminal law professor at Loyola Law School professor whose work explores the connection between race, gender identity, and criminal justice. The supervisors also appointed Ocen to the civilian commission overseeing the LA County Sheriff’s Department in 2016.

Solis’s other appointee, Jose Osuna, serves as Homeboy Industries’ Director of External Affairs. In August, Osuna asked the supes to vote against the creation of the “well intended” motion to create the public safety commission.

“The framework for this commission is flawed and reactionary,” Osuna said. Creating a group “that is tied to shooting a police officer…how could we expect this commission to come out with an unbiased report or a set of recommendations?” Osuna also expressed concern that the composition of the commission would be “too heavy with law enforcement,” and therefore not “structured in a way that is representative of the entire Los Angeles County community.”

The LA Times editorial board is worried, as well.

“Mejia could become—if the blue-ribbon commission permits—the chief weapon to undermine late but welcome improvements to California’s criminal justice system,” the editorial board wrote. “The commission could do the public a real service if it takes up, examines and once and for all refutes the various falsehoods about criminal justice reform — and if it pinpoints those areas in which there truly are problems that can be addressed with particular changes to the law, or to day-to-day operations of law enforcement or courts.”