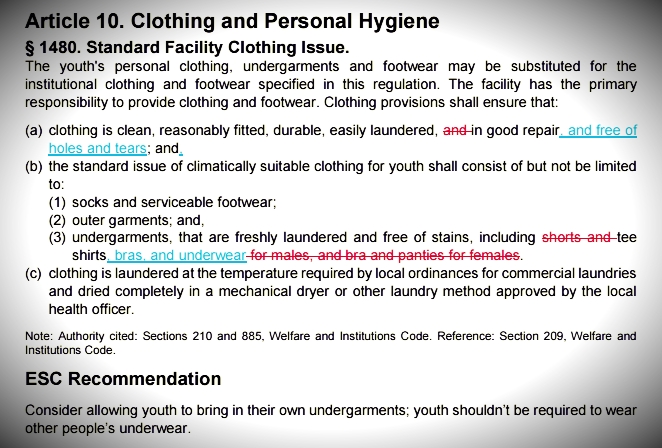 For the past nine months, advocates have been mounting a campaign to improve the living conditions of youth incarcerated in California’s juvenile halls, camps, and ranches.

Changes up for approval include requirements that correctional staff respect the gender identity of youth, and that incarcerated youth are granted visits from their children. Also, for the first time, chemical spray would no longer be used as a behavior management tool.

But advocates are still hoping to press for several other changes when a California Board of State and Community Corrections (BSCC) committee meets in Sacramento this week. These include deciding whether all youth should be able to receive their own clean, non-disposable underwear when they enter a facility and whether California should restrict the use of shackles and other restraints when youth aren’t deemed flight risks.

“When we as a state or a county take responsibility for these youth, we have to make sure that these facilities are actually helpful to them,” said Dominique Nong, a senior policy associate with the Children’s Defense Fund’s California office.

In December 2016, 4,351 youth were detained on any given day in county-run juvenile detention facilities across the state.

The BSCC is the under-the-radar state agency that is responsible for establishing minimum standards for incarcerated youth and for inspections to make sure the state’s facilities are maintaining those standards.

A meeting of the BSCC executive steering committee this week will determine which of the recommendations will be passed on to the board of the BSCC. Recommendations are expected to be finalized by the board later this week and would go into effect starting in April 2018.

The last time the BSCC made changes to the minimum standards for California facilities was in 2014.

“I went to the halls at a young age, not too street smart. I came out with a lot more anger at the system due to mistreatment of the youth,”  reads one survey respondent’s response, which also noted the frequent use of pepper spray and cussing by guards.

Some advocates also participated in the work groups that organized these suggestions, though the work groups that make the recommendations about minimum standards for youth in lock-up are still predominately staffed by law enforcement personnel, often from probation departments across the state.

These groups have already put forth several recommendations, such as new instructions around how staff members at facilities can be more culturally responsive with youth, including specific instructions about referring to them by their preferred name and pronoun.

But a letter signed in August by a coalition of juvenile justice organizations, including the Anti-Recidivism Coalition, Ella Baker Center for Human Rights, Pacific Juvenile Defender Center, Youth Justice Coalition, the Children’s Defense Fund California and several others from across the state, urges the BSCC go further. It calls on the state agency to bring some county policies in line with national standards for the way youth are treated in the justice system.

For example, the current minimum standard at county facilities is 10 youth to every one staff member during the day and 30 to one at night. But more than 300 jurisdictions and the federal Prison Rape Elimination Act (PREA) require a ratio of 8 to 1 during the day and 16 to 1 at night.

The letter also notes that there many other ways standards for juvenile detention in California lag behind other child-serving institutions that have altered their practices based on the health and well-being needs of children in the juvenile justice system. As of 2013, 36 states no longer use chemical spray for any reason, and many courtrooms are making sure youth are not unnecessarily shackled.

Then there’s the issue of whether every youth should be entitled to a new pair of their own underwear. Under current rules, underwear, bras, and socks are cleaned and exchanged daily in juvenile detention facilities. For girls and young women, that means sharing underwear that isn’t always stain-free. In some facilities, girls and young women may receive disposable, paper underwear to wear for their stay.

Sara Kruzan, who served on the BSCC regulation revisions workgroup that debated this issue, thinks girls and young women in juvenile detention deserve to have a more compassionate experience than she did.

At age 17, Kruzan was sentenced to life in prison after she shot and killed her abuser, a man who sexually trafficked her as a child. She was paroled in 2013 after a judge took into account her childhood trauma and sexual abuse, but Kruzan still remembers the dehumanizing experiences when she was incarcerated as a juvenile.

“I couldn’t go outside for 18 months unless I had a belly chain wrapped around me, with my wrist handcuffed to my waist and chains on my ankle,” Kruzan said.

For Kruzan, who now works with girls in the juvenile justice system as a program coordinator with Healing Dialogue and Action, giving a fresh pair of underwear and a bra to girls and young women in juvenile lock-up is a small but important part of acknowledging the trauma they’ve experienced.

Earlier this year, the Los Angeles County Probation Department created a new policy that provides all young women in its camps and halls with their own undergarments. But creating a new policy that would offer new, individual underwear to young people at juvenile detention facilities in all counties in the state has thus far been held up because of concerns about the cost of laundry and new washing machines, according to members of the work group that debated the recommendation.

Part of the issue is that sometimes not all counties are able to absorb the cost of making the changes, according to BSCC Deputy Director Allison Ganter.

“We’re trying to employ best practices across the state, but we have to realize that not all counties have the same resources as Los Angeles,” Ganter said.

For advocates like Kruzan, handing out fresh underwear is not just about clothing. It’s also about granting a small sliver of dignity during trying times.

“Giving underwear to children is our responsibility as adults to ensure we give them the most healing atmosphere we can,” Kruzan said. “We don’t always know the trauma that these girls have been through — the assaults or the sexual abuse — but we can start to give them a little dignity with a fresh pair of panties or fresh bra.”

Follow-up Note: Since this article was published, the BSCC’s Executive Steering Committee made a few changes to the recommendations for minimum standards in California juvenile detention facilities at its meeting, thanks to the work of a coalition of juvenile justice advocates.

Most prominently, the committee agreed to provide youth with new, non-disposable underwear upon intake that they will keep for the duration of their incarceration. That change will join several other significant potential new policies for youth in county lock-up, including the provision that youth be able to visit with their own children. The next opportunity to weigh in on the proposed changes will be at an Executive Steering Committee meeting in Sacramento on November 15. After that, the changes are expected to be passed on to the full BSCC board.

Jeremy Loudenback is the Child Trauma Editor at The Chronicle of Social Change where this story originally appeared.