On March 24 of this year, twenty days after Governor Newsom declared his state of emergency regarding the COVID-19 pandemic, the governor issued an executive order to “suspend intake” of any new entrants into California’s prisons, in the hope of avoiding bringing the virus from the various county jails to the state’s 35 lock-ups.

As part of the executive order, Newsom also did the same thing for the state’s Division of Juvenile Justice (DJJ) — prison for kids — by prohibiting any new youth from being transferred from the counties to California’s juvenile system, consisting of three youth lock-ups, (plus one fire camp).

In the case of the youth prisons, turning off the pipeline paid off.

Over the past three months, although the virus has been exploding at a frightening rate in many of California’s adult prison facilities, there were zero instances of residents in the state’s youth facilities testing positive for COVID-19.

During that same period, according to the CDCR COVID database, a total of eight staff members have tested positive for coronavirus in the DJJ youth facilities.

What was closed now is open — with consequences

Then, on May 25 as California was proceeding with a multi-phased partial opening, the state’s youth facilities also reopened their doors and again began taking kids from the various counties.

And on June 14,  DJJ got its first positive testing young person.

According to emails WitnessLA has acquired, which were sent to staff from officials in the NA Chaderjian Youth Correctional Facility (otherwise known as CHAD) as of now, three kids have tested positive during the period between June 14 and June 22. 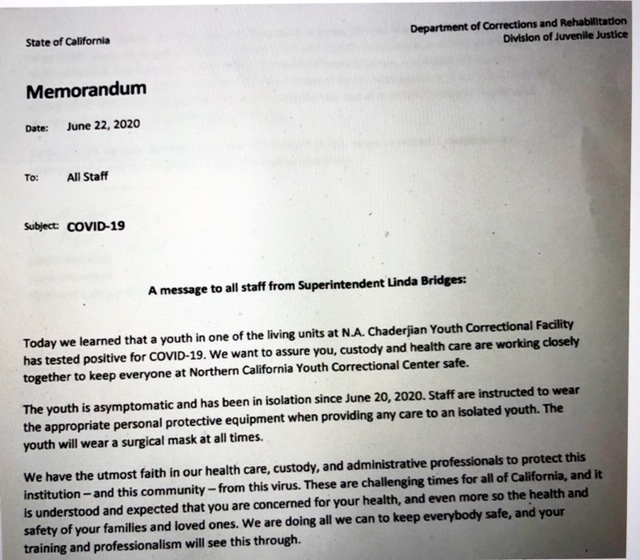 On June 16, staff members were notified of the first kid to test positive. On June 18, staffers got a new notification about a second kid who was infected.

Then on June 22, memo number three arrived from Linda Bridges, the CHAD school superintendent, about the third kid who was testing positive.

According to DJJ officials, the positive testing youth are being housed separately in an on-site medical housing unit.

“The department is following isolation and quarantine protocols in accordance with Centers for Disease Control and Prevention guidance to address COVID-19,” according to officials.

Since March 18, 2020, no volunteers have been allowed to enter DJJ to help with programming for youth, and family visitation is still suspended.

So, with most programming for youth all but vanished, no visits from family allowed, why unnecessarily open up to contagion by yanking kids out of county facilities.  What exactly is gained—especially when, in a few months, DJJ will be closing down altogether?

As readers may remember, on May 14, Governor Gavin Newsom announced a plan to shutter the state’s youth correctional system permanently.

Now, in the meantime, the state’s counties are sending youth to the state’s youth prisons.  And it appears that COVID-19 may be coming with some of them.

Since LA County sends more kids to DJJ than any other county, given all the other chronic problems that make the state’s youth facilities an unhealthy, non-rehabilitative or healing environment for any kid (as WLA and our writers have repeatedly reported), this is one more on a long list of reasons to turn the spigot off at our end — now not later.

For more on the issues surrounding the eventual closure of the DJJ, see WLA’s earlier stories on the matter here and here.

Note: The COVID numbers for the CDCR staff numbers are self-reported so tend to be less timely in the numbers for the CDCR facilities’ residents—adult or youth. The CDCR doesn’t show the positive-testing kids on its unusually well-designed Population COVID-19 Tracking database, but rather shows them here.