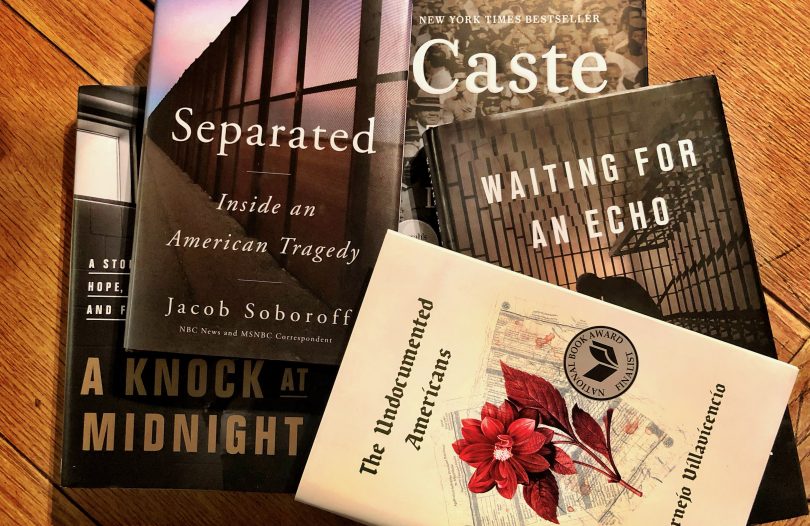 The finalists for the Los Angeles Times Book Awards were announced on Tuesday morning, March 2.

And, this year, each of the five books chosen as finalists for the category of Non-Fiction Current Interest, each have something unique to say about some aspect of the world of justice.

So, if you’re looking for some stellar works of nonfiction, here is the Current Interest shortlist with some quickie summaries to get you started.

Brittany K. Barnett, “A Knock at Midnight: A Story of Hope, Justice, and Freedom”

Brittany Barnett’s “A Knock at Midnight” is part riveting and gracefully written memoir, part an impassioned call to action to reform the outsized sentencing many states still employ for nonviolent drug crimes, which — unless we’re locking up a big time dealer —  rarely make anybody safer. Barnett is a gifted attorney who has won releases for a list of clients serving life in prison for nonviolent federal drug offenses. She is also the daughter of a mother who served time for a drug-related offense when struggling with her own addiction, and Barnett makes sure we understand the collateral effects on a family when a mother vanishes behind bars.

Karla Villavicencio was herself a Dreamer when she wrote, “I’m an Illegal Immigrant at Harvard,” an essay she published anonymously in the Daily Beast, but that nevertheless gathered attention because of the strength of her writing. Yet, Villavicencio was tired of writing just about herself from the shadows so, just after the 2016 election, she wrote her immigration lawyers telephone number on her hand and began traveling across the country in order to discover and tell the stories of other undocumented immigrants. The four year reporting and writing journey produced The Undocumented Americans, a book that is like no other, which also introduces us to a remarkable new voice in American literature.

Christine Montross, “Waiting for an Echo: The Madness of American Incarceration”

Psychiatrist Christine Montross,  Associate Professor of Psychiatry and Human Behavior at the Warren Alpert Medical School of Brown University, and author of Waiting for an Echo: The Madness of American Incarceration, was working at a psychiatric facility, when she decided to look into how the American legal system manages mental illness. The answer was horribly. That initial research led her to widen her probe, and then widen it again. The eventual result was “Waiting for an Echo,” a painful, brilliant, and emotionally haunting look at the psychological damage routinely caused by the our jails and prisons.  (It is also exceptionally well written, since Montross also happens to be poet.) “Incarceration in America routinely makes mentally ill people worse,” writes Montross. “And just as routinely it renders stable people psychiatrically unwell. Our system is quite literally maddening.”

Jacob Soboroff, who is a correspondent for NBC News and MSNBC, was covering the nation’s changing immigration policy among other topics when, almost by accident, he became the first reporter see the inside of Casa Padre, a former Walmart in Brownsville, Texas, where nearly 1,500 immigrant boys who ranged in from 10 to 17, were being kept after they were rounded up at the U.S.-Mexico border. He wasn’t allowed to bring in a camera or his cell phone, inside the facility, or any kind of recorder, but the DHS officials allowed a paper notebook.  So Soboroff took notes quickly and obsessively. And then he reported.  In conscience-shocking detail. After that, he kept reporting more still.  The result was Separated: Inside An American Tragedy, Soboroff’s impassioned and deeply humane account of his experience in digging into former President Donald Trump’s then new policy of separating families.  Interwoven with his reporting narrative, is the story of 12-year-old José and his father, Juan, who fled Guatemala for the U.S., and were, like so many other children and parents, separated, with no seeming way to reconnect, possibly ever again. Soboroff invested in the harrowing tale of this pre-teen boy and his father, and makes sure we do too.

Isabel Wilkerson, “Caste: The Origins of Our Discontents”

“A caste system,” writes author Isabel Wilkerson, “is an artificial construction, a fixed and embedded ranking of human value that sets the presumed supremacy of one group against the presumed inferiority of the other groups on the basis of ancestry” and other “often immutable traits.” These traits, she says, “would be neutral in the abstract but are ascribed life-and-death meaning in a hierarchy favoring the dominant cast….”   Caste is beyond racism, Wilkerson tells us in this immaculately researched, beautifully composed narrative. Wilkerson, a Pulitzer Prize-winning journalist, went through her own internal journey, in her quest for answers, documenting how the Nazis of Germany studied the caste system of the U.S. in forming their own deadly system, and found the American system, in some ways, too extreme. Among the other many other stories within this reexamination of what lies under the surface of American life,  she tells of Dr. Martin Luther King’s 1959 visit to India where he was startled when that nation’s untouchables viewed him as one of their own, until he realized their vision was correct. Be forewarned however, Caste is not one of those books you can easily ignore once finished.  This new/old portrait of our nation’s present crisis of identity leaves behind blood on your psyche.  It leaves fingerprints.

And in the world of novels…

Oh, and in case you also find yourself in the mood for fiction, the mystery/thriller shortlist is excellent.  It includes:

“A Beautiful Crime,” by Christopher Bollen

“These Women: A Novel” by Ivy Pachoda

You honestly can’t possibly lose with any one of these five tales of justice and injustice, crime and consequence, by five important voices.

Then, if you need more still, you shouldn’t miss Stephen Graham Jones, “The Only Good Indians.” which is a finalist for LA Times’ Ray Bradbury Prize.  It is an unusual and fascinating tale of horror that no-one but the exceedingly gifted Stephen Graham Jones could possibly write. And thankfully he did.