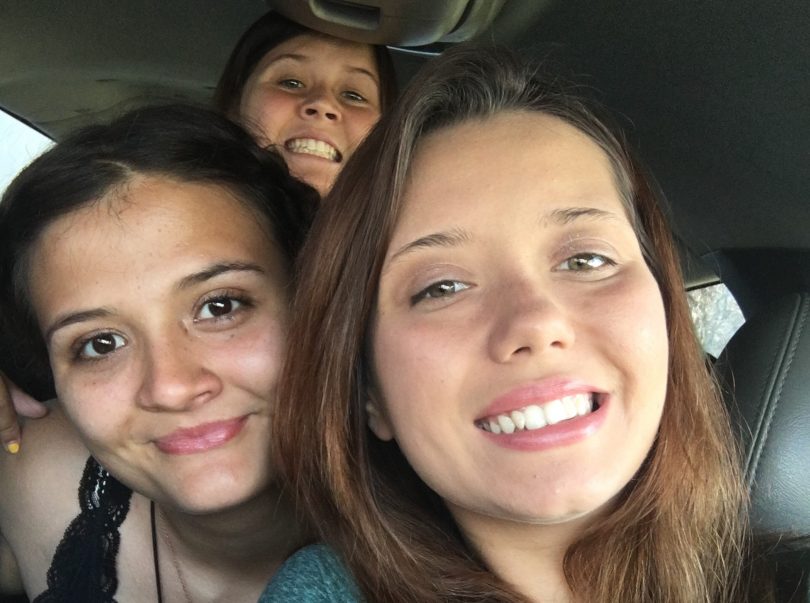 Destiny Adams was driving on Balboa Boulevard, on the way to visit her two younger sisters, when she got the call.

The courts had just ordered the sisters, Lisa, 13, and Nicole, 16, to be removed from their father’s care. (The girls’ names have been changed to protect their privacy.) A social worker from The Los Angeles Department of Children and Family Services (DCFS)  wanted to know if the girls could go to Destiny’s apartment or if the county needed to find other placement.

I want them, Adams said. Destiny Adams was already caring for her own three children (left to right), Jordyn, 3; Jonathan, 5, and Jacob, 6, when her two younger sisters needed a foster home. (Photo courtesy of Destiny Adams)

Just 22, and a single mother of three of her own kids, she knew that bringing Lisa and Nicole into her small two-bedroom apartment in Stevenson Ranch would be a tight fit. Adams’ is a full-time student at College of the Canyons, and her only sources of income are financial aid, and child support. (She’s in the midst of a divorce from her children’s father.) But as a former foster child herself, Adams knew she would get a monthly stipend to care for each of her sisters. So she figured she could make it work.

What she didn’t know yet was that California’s ambitious Continuum of Care Reform (CCR), a statewide overhaul of the foster care system implemented in 2017, had one still-unresolved kink that would leave her without compensation for months. In that time, she would nearly lose her car, have her bank threaten to close her checking account, and come close to getting evicted from her apartment on three separate occasions.

In an effort to streamline the evaluation of a household’s fitness to take in a foster or adoptive child, California implemented a pilot project called Resource Family Approval (RFA) as a pillar of its reforms. On the surface this is a good thing, since it means that rather than putting a candidate through multiple processes of varying thoroughness for potential caregivers, the new process would offer a single, comprehensive standard that includes mandated foster parent training, psychosocial assessments, and multiple in-person interviews, all to be completed within 90 days.

“We want kids to get connected to people that they know as quickly as possible [after removal from their homes], because we know that’s the best thing for the kid, psychologically,” said Angie Schwartz, policy program director at the Alliance for Children’s Rights in Los Angeles. A relative or family friend “is likely to be the most stable placement for that young person.  We know that from research.

Families were eligible for funding only after successfully completing the RFA process.  But even those families approved within the 90 days were liable to face three months of unfunded child care. For a low or middle-income household unprepared fiscally to take in a grandchild, niece, brother or cousin, the burden of paying for food, diapers, clothes and other essentials sometimes meant that a child needed to be re-placed with someone else despite a relative’s best efforts, according to Schwarz.

And across the state, families were waiting for longer than the allotted 90 days. According to Department of Social Services data, in February of this year, 41 percent of  families who applied were still waiting for approval after 90 days.

Los Angeles County’s situation was even worse, approving only 5 percent of RFA applications within 90 days, during the year period between CCR’s implementation on Jan. 1, 2017,  through Jan. 31, 2018.

Fifty-two percent of LA’s DCFS applications took longer than six months to gain approval. That’s six months of paying out of pocket to keep a child — or children — clothed and fed.

“We had grandparents who had to say, ‘I can’t care for these kids anymore,’ and actually give up the placement because they couldn’t make ends meet,” Schwartz said. “We had people get actually evicted from their homes and lose their housing.” And then the kids had to move elsewhere.

Before the reforms, California’s Department of Social Services managed the process of licensing county foster homes in Los Angeles County’s immense child welfare system. But the county’s own Department of Children and Family Services was always in charge of approving relative caregivers, like Destiny Adams. Post reform, however, the responsibility for foster home licensing  shifted to LA county, which had the unintended effect of complicating the relative caregiver approval process. This new licensing responsibility that was suddenly placed on the county’s shoulders also meant a higher learning curve for local social workers doing the licensing , along with a sea of red tape for DCFS to manage.

“We’re doing new work and we’re doing it in a new way, so it’s kind of like a double whammy for us,” said Brandon Nichols, chief deputy director of DCFS. The amount of work the RFA process entails was underappreciated by the state, he said, and so was the number of caregivers willing to step up and take in relatives on an emergency basis. The latter was a pleasant surprise, according to Nichols, but one that created more RFA applications to process and longer delays. The length of time kids were staying with relatives without financial help was increasingly unsustainable.

LA County’s temporary solution was to use a source of state funding designed to “enhance caregiver recruitment” as part of CCR, to be used at counties’ discretion. That allowed DCFS to offer $400 per month per child for the first three months to families awaiting resource family approval.

“We’re often placing children with relatives on an emergency basis. so if we have to remove a child from a mom or a dad, we’ll be knocking on the door in the middle of the night,” Nichols explained. “We didn’t think that was fair to do without giving them some financial support to assist them.” Nicole, 16, reads to Jordyn, 3. The three children, two teenagers, and Destiny are living in a small two-bedroom apartment (Photo courtesy of Destiny Adams)

The weeks continued to pass without relief. Adams said she wasn’t told that she needed to apply to go through the RFA process until her sisters had already been with her for a month.  Then, when she contacted the social worker who had her case, the social worker told her that she was on leave and couldn’t help her.

The three months of emergency stipends allocated by LA County ended, and still Adams had no regular funding. At one point, her car was nearly repossessed, she said, but she managed to hang on to it. She received three eviction notices, but each time managed to scrape together enough money to make rent before the three-day deadline was up, and her landlord could legally put her out on the street.

Finally, on March 2, Adams was approved as a “resource family.” She should receive back pay starting from her approval date (as of publication, she has received only one check for one of her sisters), but won’t get retroactive payments for the three-month gap between the three $800 monthly stipends ($400 per sister) and her approval date.

The search for a solution

On March 30 of this year, the California legislature passed Assembly Bill 110, a short-term urgency measure to provide the standard rate for emergency caregivers ($923 monthly per child), for families going through the approval process. The money isn’t available retroactively for any period of caregiving prior to March 30, however, and AB 110 will expire at the end of the fiscal year on June 30. Plus, not all families get approved even within six months. Schwartz stressed that the bureaucratic machinery must make sure there is “no cliff that families fall off of. There should be no disruption in funding and support to these families.”

Schwartz is optimistic that a long-term version of AB 110 will be part of the governor’s proposed budget for the upcoming fiscal year. A proposal for such a long-term solution did appear in May’s revision of the budget, but limited emergency support to six months in the coming fiscal year, and just three months in subsequent years.

The Senate Budget Committee has recommended including language in the legislation that accounts for families whose approval processes take longer than six months.

Meanwhile, DCFS is strategizing about how to reduce the RFA bottleneck, aiming to get through the current queue of families waiting for approval by September. The plan is to bring on 100 new hires solely dedicated to that task, Nichols said, and for every existing DCFS employee “from [new DCFS Director] Bobby Cagle on down” to take on one case themselves.

On April 10, the Senate Human Services Committee approved a bill, introduced by Sen. Holly Mitchell, that is meant to shorten the RFA process.

“Having been adopted by my grandparents and going through the foster care system myself,” she wrote, “I know firsthand how much impact relative caregivers have on children’s lives.”

She requested that the legislature “continue to provide funding at the time of placement beyond June 30 so that no family ever has to go through what I went through,” and to ensure that if a long-term solution is adopted, “there is no gap in funding when Assembly Bill 110 expires and the new, long-term solution begins.”

If these requests become a reality, Adams said, “families will be able to focus on what matters most: children — just like my sisters.”

“This bill is an important step toward fulfilling the intent of RFA by supporting families and making sure that unintentional delays do not result in hardship for children who are recovering from abuse and neglect,” Mitchell said. “This creates a more thorough process for vetting potential family placements, ending the cycle of multi-home placements for youth in foster care and group home care settings.”

Fixing the RFA program will put California on track, improving the lives of foster youth and families, Mitchell added.

SB 1083 now moves to the Assembly; an initial hearing date has not yet been set.

This story originally appeared in the Juvenile Justice Information Exchange as part of their Los Angeles Bureau project.