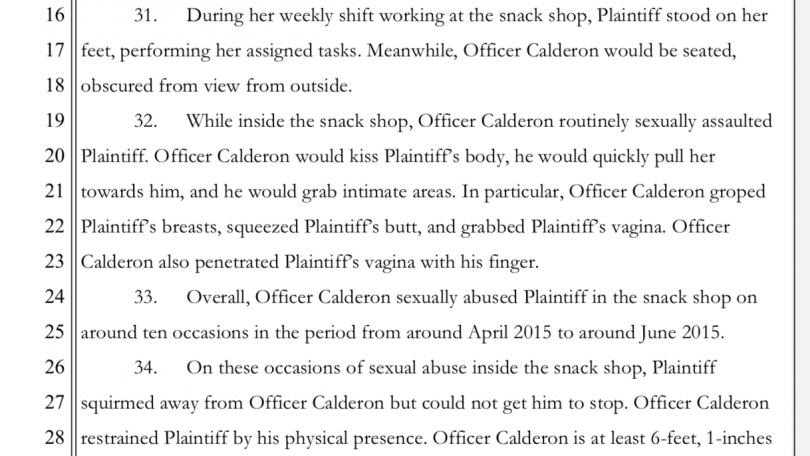 Less than a month ago, former Los Angeles County deputy probation officer, Oscar David Calderon Jr., 33, was booked into the LA County jail system after pleading guilty to two felony counts of assault under the color of authority the month before, after being accused of “inappropriately touching” girls at one of the county’s juvenile probation camps.

When he was arrested in January of this year, Calderon was originally charged with two counts of lewd and lascivious acts upon a child, and four counts of assault by a peace officer. Prosecutors stated that the victims ranged in age from 15 to 18 and that the abusive events began in 2014.

According to the Los Angeles County District Attorney’s Office, Calderon worked as a deputy probation officer for approximately nine years, and worked at Camp Scudder, an all-girls juvenile facility located in Santa Clarita, since 2014, which was where he reportedly made sexual overtures to some of the teenage girls at the camp, and assaulted two of them.

As a condition of his plea deal, however, Calderon was able to avoid admitting to the charges of lewd and lascivious acts with a child, and the assaults dropped down to two girls, instead of four. The original charges could have resulted in a five-year prison sentence for Calderon, according to the DA’s spokesperson. In addition, he would have been forced to register as a sex offender.

Instead, on September 20. Calderon was sentenced to a year in LA County jail. He began his jail term on October 23.

On November 14, less a month later, Calderon was released from jail and allowed to return home.

“My client is ready to start a new life and move past his mistake,” said Ambrosio Rodriguez, Mr. Calderon’s attorney.

An “escalating pattern of inappropriate attention”

The criminal charges are not the end of the matter. As WLA reported earlier, one of the young assault victims from Camp Scudder filed a civil lawsuit in federal court on July 14, 2017, alleging not just the abuse, but also that a supervisor, and a therapist, knew about Calderon’s behavior, and did nothing to intervene. The suit also alleges that multiple other co-workers observed at least some of the officer’s increasingly inappropriate actions, which should have been perceived as red flags.

According to an amended complaint filed on September 6, 2017, by the victim’s attorneys, Erin Darling and Justin E. Sterling, during the time their client was in Camp Scudder she was under the direct supervision of then-Officer Calderon, who allegedly used his power to threaten her into compliance.

“On at least two occasions,” the attorney s wrote, “Officer Calderon told Plaintiff that if she refused to obey him, ‘I will fuck up your court reports.‘”

Calderon was reportedly also in charge of where the victim worked in the camp, what personal items could be sent to her by her family, and how many phone calls she could make to family members, and other similar areas of oversight of the victim’s time at camp.

The complaint describes an escalating pattern of inappropriate attention from Calderon toward the victim, which eventually, according to the lawsuit, became a weekly pattern of sexual assault.

Calderon is described by the Los Angeles Sheriff’s Department’s inmate database as being 6’1″ in height, weighing 240 lbs, as compared to the victim, who reportedly is 5’2″ and weighs 120 lbs.

The escalating attention, which reportedly embarrassed and worried the victim, graduated to odder forms of behavior, such as rousting the young woman out of her bed after lights out to sit with him in the darkened cafeteria. Soon the incidents allegedly intensified to incidents of inappropriate touching, kissing, and in one alleged incident, choking.

Finally, from April 2015 through June 2015, according to the harrowing narrative laid out in the complaint, Officer Calderon sexually assaulted the victim, who was by then, 18, once a week, “on approximately ten occasions.”

The alleged acts described included sexual fondling, groping, and digital penetration, among other assaultive actions, which occurred during her weekly work shift at the camp’s snack shop, where the officer could reportedly grab her out of sight of others.

“Depression of the past, anxiety of the future”

On the day of Calderon’s sentencing, the victim who signed the lawsuit read a statement in which she described what she had experienced.

After Calderon’s release from jail, Justin E. Sterling, one of the victim’s two attorneys, described how dismayed he was at the fraction of his sentence that Oscar Calderon has served.

“It’s unfortunate,” Sterling said. “When someone is sentenced to a year, and he does less than a month. And he was also able to skirt sex offender charges, because of his plea deal. It’s very disappointing.” This is especially true, said Sterling, “when you understand both what he was accused of and what he pled to.”

“A young girl was horrifically abused while in custody and will likely experience a ‘life sentence’ of traumatic memories,” said Jacqueline Caster, president and founder of the Everychild Foundation. “Yet the officer who victimized her suffered virtually no consequences and is back on the street without rehabilitation. This is not only an insult to her and the other young victim, and a minimization of the abuse they experienced, it also communicates an utter lack of concern for other potential victims.”

(Caster is also a member of the LA County Probation Commission, but spoke to WLA personally, as a youth advocate.)

The matter of early release

When asked about how Calderon’s release was calculated, the Los Angeles County Sheriff’s Department, which oversees the county’s jail system, sent WitnessLA the following explanation.

Inmate Oscar Calderon was released according to our early release criteria due to overcrowding. He appeared at Clara Shortridge Foltz Justice Center and was sentenced to 364, with 5 days custody credits for the charge of 149 P.C. (Assault by a Peace Officer). On November 13, 2017, it was determined that Inmate Calderon had served 11.40% of his sentenced time. The charge of 149 P.C. does not fall under the more serious traditional sentence charges also known as M-7 criteria, therefore he was required to serve a minimum of 10% of his sentence.

The LASD noted that “as the result of a court decision commonly referred to as the Rutherford Decision, LASD is required to manage the crowding levels within the jail,” which is done using a number of strategies. Early release is one of them.

Under the terms of his plea agreement, Calderon was also placed on formal probation for five years, and ordered to stay away from “all victims” during those five years.