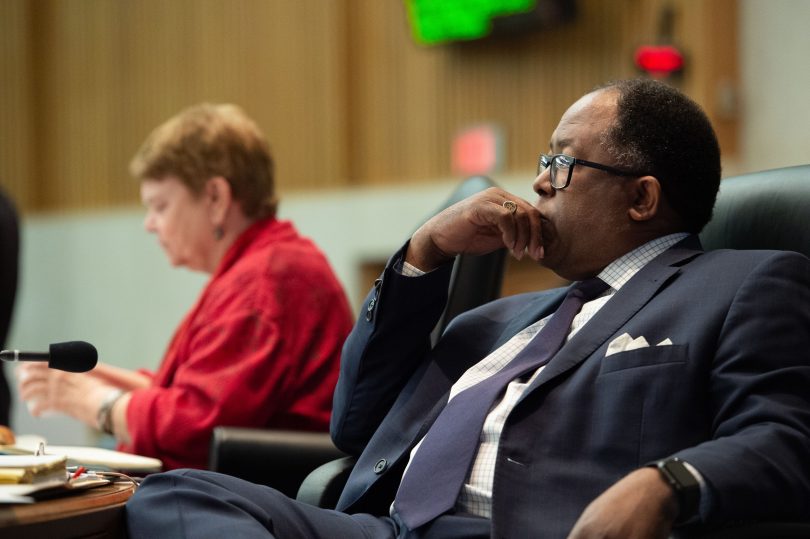 At around 2:30 p.m. at the Tuesday, March 5, meeting of the Los Angeles County Board of Supervisors, Supervisor Mark Ridley-Thomas unexpectedly read in a brand new motion, co-sponsored by Supervisor Sheila Kuehl.

If passed by a majority of the board, the motion will instruct Sheriff Alex Villanueva to discontinue his newly-launched practice of “unilaterally reinstating” fired deputies, until all legal questions have been resolved – including appeals.

By “legal questions” and “appeals,” we assume the two supes are referring to the county’s recently filed lawsuit against Villanueva, having to do with his extremely controversial reinstatement of former LASD deputy Caren Carl Mandoyan, a legal move that will have its first hearing on Wednesday.

Carl Mandoyan, as most readers know, was discharged from the LA County Sheriff’s Department on September 14, 2016, for allegations of domestic abuse, stalking, and spying on his ex-girlfriend, who was at the time also a deputy also working at the department.

“The Sheriff’s Department needs the public’s trust in order to be effective, so ensuring transparency, legality and oversight in this matter are necessary,” said Ridley-Thomas. “The men and women of the Department, as well as the people of Los Angeles County, deserve no less.”

Kuehl was equally emphatic. “There are a lot of unanswered legal questions, not only regarding the Sheriff’s reinstatement of a previously dismissed deputy, but also his plans to proceed with a proposed ‘Truth and Reconciliation Commission,’” she said. “I need to understand all our legal options. Rolling back reforms adopted by the Department, and doing so without legal authority, cannot be allowed.”

County Counsel will be asked to come back with their report for the board within 30 days.

The Board of Supervisors is expected to vote on the Ridley-Thomas/Kuehl motion on March 12.