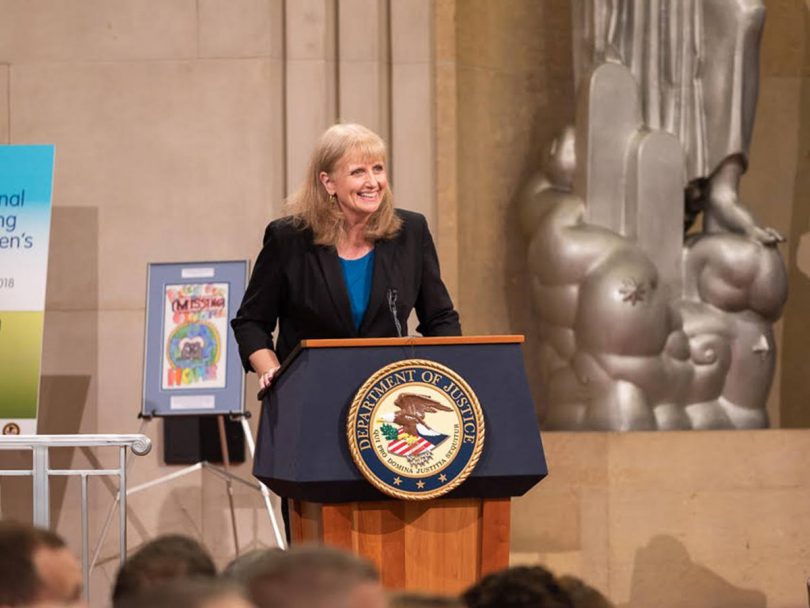 Editor’s Note: This January, former Arkansas prosecutor Caren Harp was sworn in as the head of the federal Office of Juvenile Justice and Delinquency Prevention, or OJJDP, the government agency that—as its mission statement declares—“provides national leadership, coordination, and resources to prevent and respond to juvenile delinquency and victimization.”

States’ grants are attached to compliance with four standards at the heart of the Juvenile Justice and Delinquency Prevention Act (JJDPA):

1. Decriminalizing kids who commit “status offenses”–crimes that only apply to minors (like running away, breaking curfew, underage possession of alcohol, and truancy).
2. Removing juveniles from adult prisons and jails (with a few exceptions)
3. Making sure there is “sight and sound” separation between adults and the kids who are placed in adult facilities.
4. Identifying, researching, and addressing “disproportionate minority contact” (DMC) in all areas of the state’s juvenile justice system.

Noncompliance costs states 20% of their grant money, for each of the standards to which a state fails to adhere.

Under the fourth tenant, states are required to gather and analyze nine areas where youth of color and other minority groups have disproportionate contact with the juvenile justice system.

States are required to submit the data collected with their request for OJJDP grant funds. The data gathered is not, however, used to determine whether the feds will give states the cash they request.

Recently, the OJJDP director announced plans to reduce her office’s requirements for the data states must report.

In the commentary below, the nonprofit Center for Law and Social Policy’s Noel Tieszen, Whitney Bunts, and Justin Edwards argue that reducing data gathering and analysis is actually more like to harm kids in the long run.

Caren Harp, Administrator of the federal Office of Juvenile Justice and Delinquency Prevention (OJJDP), recently announced plans to reduce requirements for state reporting on youth involvement in the justice system. Harp says her plan will simplify data management and shift the focus from process to outcomes. She asserts, “This will give OJJDP more time to focus on compliance and programming assistance, and it will allow states to redirect resources toward reducing disproportionate minority contact (DMC).” However, the details of her decision belie this claim and raise serious concerns about the future of justice for youth of color.

The OJJDP was created to oversee compliance with the Juvenile Justice and Delinquency Prevention Act (JJDPA). Among other protections, the JJDPA requires states receiving formula funds to address disproportionate rates of justice system involvement among youth of color. OJJDP currently requires states to report rates of involvement at several decision points, such as referrals to diversion programs, juvenile court, or probation.

Decades of data demonstrate racial and ethnic disparities throughout the juvenile justice system. For example, from 1990 to 2010, Black youth were arrested at roughly twice the rate of white youth. The disparities worsen as youth move through the system. After arrest, Black youth face higher rates of juvenile court referral, pre-trial detention, transfer to adult prisons, and other negative outcomes.

State leaders need data on each point of contact to pinpoint problems, make relevant changes, and evaluate the success of their efforts. Unfortunately, OJJDP has failed to enforce compliance with requirements to report this data. For that reason, bipartisan bills reauthorizing the JJDPA (passed last fall in the House and Senate) added accountability language to strengthen the requirement to address disparities.

A Move in the Wrong Direction

Harp takes the opposite approach. Rather than enforcing compliance or helping states use data to address disparities, she is reducing the number of data points they must report, giving them new discretion to choose their own goals, and allowing them to evaluate themselves. She makes a baseless and illogical claim that publishing their reports will incentivize states to improve on their own. This approach abandons OJJDP’s core function: to ensure that states comply with the JJDPA.

Notably, Harp follows almost every mention of reducing DMC with a caution about “maintaining public safety.” But the goal of equal treatment under the law is not a threat to public safety. On the contrary, a system that metes out “justice” differently based on defendants’ race is a direct and specific threat to the safety of youth of color. Framing DMC reduction as if it were at odds with public safety reinforces dangerous myths about the criminality of youth of color and undercuts the JJDPA’s DMC provision.

Unchecked racial and ethnic disparities in the justice system are an affront to the ideals of democracy. It is up to the Department of Justice to ensure equal justice for all people. Never is this more critical than when it concerns youth. We urge Administrator Harp to reverse her decision and urge Congress to bring JJDPA reauthorization to a final vote.

Image courtesy of the U.S. Office of Juvenile Justice and Delinquency Prevention: OJJDP Administrator Caren Harp during the 2018 #NMCD ceremony on May 23.