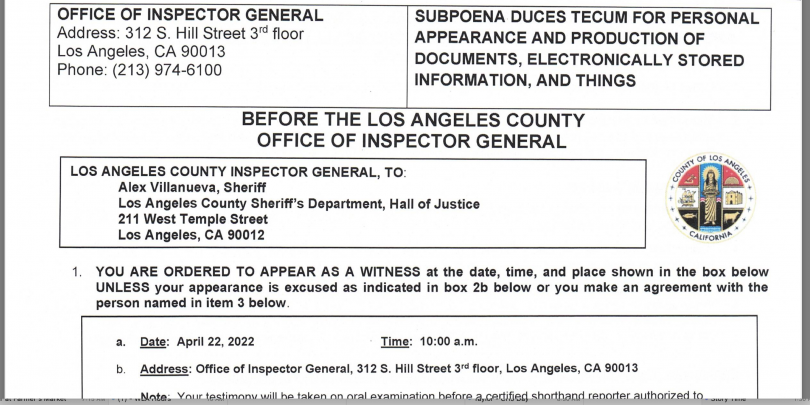 The last subpoena from Huntsman, which the sheriff is still fighting, required Villanueva to answer questions under oath about the department’s deputy gang problem.

This new subpoena is focused on the now notorious March 10, 2021, incident involving LASD deputy Deputy Douglass Johnson who, in the course of attempting to subdue and handcuff a man named Enzo Escalante in the in the holding area of the San Fernando Courthouse, kneeled on Escalante’s head as he lay on the floor, then reportedly continued to kneel for more than three minutes after the man had stopped struggling.

All of this was captured on video, and months later the video was leaked to the LA Times.

In the case of this most recent subpoena, Villanueva doesn’t have to actually appear if he has delivered to the Office of the Inspector General by 10 a.m. on April 22, 2022, the stack of records listed in the subpoena having to do with the matter of the head-kneeling by Deputy Johnson, and the reported cover-up of the incident by the sheriff, and other high-level department members.

The specific documents on the head-kneeling matter required by the subpoena are the following:

In other words, the IG’s office wants all the material pertaining towho knew what, when about the use of force incident that, while it didn’t seriously injure Escalante, had disturbing visual echoes of the murder of George Floyd by former Minneapolis police officer Dereck Chauvin. Thus, because of the “bad-optics” of situation, several LASD higher-ups, most prominently the sheriff, reportedly did all they could to keep the incident out of the public’s sight.

“The OIG has learned of allegations that the video of the referenced incident was handed over to Division Chief LaJuana Haselrig, who then personally played the video for Sheriff Villanueva and Undersheriff Tim Murakami, Assistant Sheriff Limon, and the Sheriff’s aide, Lieutenant Blanchard,” wrote Huntsman and his office in the “declarations” supporting the subpoena request.

“The OIG is aware of allegations that this occurred before the date that Sheriff Villanueva has publicly claimed to have first learned of the incident, November 18, 2021.”

Yep. And there are way too many people with knowledge of this matter to convincingly obscure the real timeline.

Since the Inspector General intends to investigate all of the above and more, he has now requested via subpoena the material on the topic to which he and his office are legally entitled.

Going after the whistleblower

Interestingly, in the supporting material, the OIG also points to Sheriff Villanueva’s recent announcement on Fox News, that he has initiated a criminal investigation into the actions of the whistleblower or whistleblowers within the department who leaked the head-kneeling video to the Office of Inspector General and to the LA Times.

If Villanueva goes ahead with this criminal investigation, according to Huntsman, he could violate a list of laws, including the First Amendment of the U.S. Constitution, and/or the Fourth and Fourteenth Amendments

Regarding the First Amendment, the OIG points to Garcetti v. Ceballos, a 2006 ruling holds that while a public employer can regulate on-duty speech, public speech, such as reporting misconduct, is protected.

Concerning the Fourth and Fourteenth, the OIG cites the SCOTUS ruling of Thompson v, Clark, a decision that came down on April 4, 2022, which—among other things —protects the members of the public against “malicious prosecution” by law enforcement.

In any case, since the sheriff has made a habit of not complying with subpoenas from the Inspector General and/or the Civilian Oversight Commission, it will be interesting to see if he complies with this one.