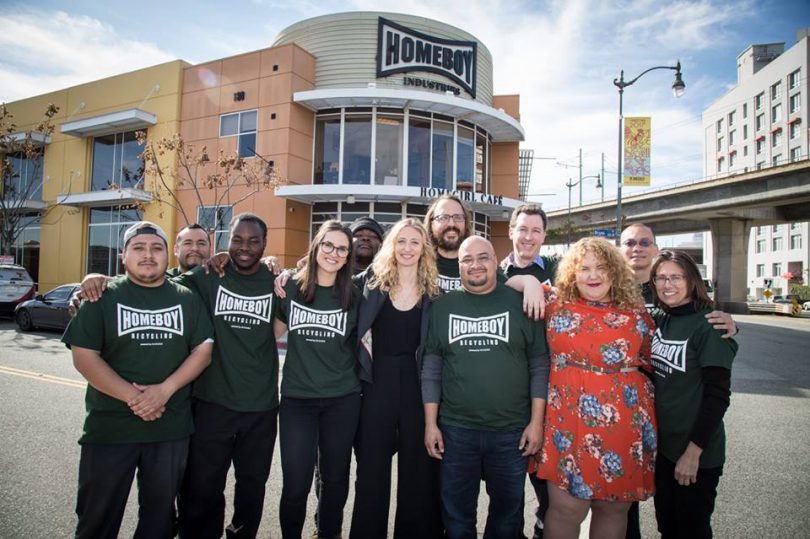 This week, Homeboy Industries announced the launch of Homeboy Recycling, an electronics recycling venture that aims to curb the flow of e-waste into landfills while creating jobs for formerly incarcerated men and women.

(If you’re unfamiliar, Homeboy is the program founded by Father Greg Boyle that, for over 25 years, has helped thousands of men and women find healthy alternatives to gang life and live successfully in their communities post-incarceration.)

Homeboy, a non-profit, acquired Isidore Electronics Recycling, a for-profit company. Until now, all of Homeboy’s other businesses (cafes, catering, screen-printing, and more) have been not-for-profit. Since Homeboy Recycling will be run as a separate business entity, it will have no effect on Homeboy Industries’ non-profit legal status.

Isidore (now Homeboy Recycling) provides training and employment to the previously incarcerated in Los Angeles. Isidore refurbishes broken electronic devices that still have life in them, and dismantles the gadgets that no longer have use, then recycles the materials within the electronics that can be reused in new products.

Ten years ago, Isidore founder Kabria Stokes was working for then-LA City Councilmember Eric Garcetti as a field deputy. Stokes says during her work, she saw the desperate need for jobs for people exiting lock-up who come up against major barriers to employment, and decided she wanted to do something about it.

“Here in America we use 25% of our earth’s natural resources,” Stokes said during the public announcement of Homeboy’s new venture. “We also incarcerate 25% of the incarcerated people on our planet.”

“For me that has to do with discarded value,” Stokes said. “I wanted to start a company where we could take these folks who have been so often discarded from our communities and put them to work recovering value from these things that we discard…that’s electronic waste.”

“While some see mountains of trash and e-waste, all of this can be recycled and my hope is that along with that, people will get training to help re-purpose these materials,” Supervisor Solis said. “That’s what it’s about. It’s not just about throwing things away and recycling, it’s about reinvesting in people.”