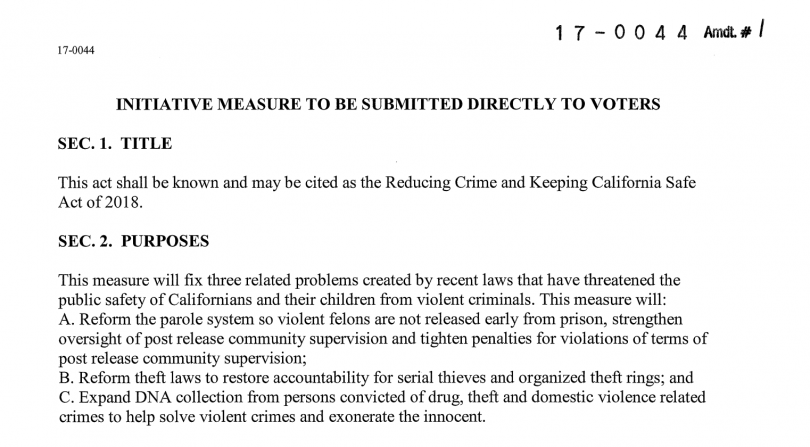 As the November elections near, opposition to Proposition 20, which would roll back key portions of major California criminal justice reforms, continues to build.

The letter, written by Crime Survivors for Safety and Justice, the California Partnership to End Domestic Violence, and Ruby’s Place, characterized Prop. 20 as a “return to the failed policies of the past.”

For those unfamiliar, the law enforcement union-backed Prop. 20 would roll back portions of important criminal justice reforms, including Propositions 47 and 57, which worked to reduce the state’s over-reliance on incarceration.

These three laws have helped to save the state millions of dollars that would have otherwise been spent on incarceration, while also allowing California to stay below a federal court-mandated prison population cap of 137.5 percent capacity. At the same time, overall crime rates in California continue to remain at record lows.

In 2014, Proposition 47 reduced six low-level property and drug “wobblers” – crimes chargeable as either misdemeanors or felonies – to straight-up misdemeanors.

Under Prop. 47, people with certain priors including serious or violent felonies or sex offenses can still charged with felonies when they commit these particular drug and property crimes.

Prop. 20 would return specific kinds of theft — unlawful credit card use, firearm theft, and vehicle theft — to the wobbler category, allowing them to be charged as felonies, which means more people spending more time behind bars.

It would also require people convicted of wobblers and Prop. 47’s former wobblers to submit DNA samples for inclusion in law enforcement databases.

Prop. 20 would require anyone convicted of wobbler crimes, as well as Prop. 47 misdemeanors, to submit to having DNA samples taken and included in law enforcement databases.

The ballot initiative would add two new crimes to the state code: serial crime and organized retail crime. These two crimes would be categorized as wobblers, as well. (Prop. 20 proponents, however, say that the measure would not put “any additional people in prison.”)

A June report from the Center on Juvenile and Criminal Justice estimated that Prop. 20 could cost the state as much as $450 million per year in court costs and incarceration. The organization calculated that somewhere between 4,900 and 9,900 of those theft offenses could be charged as felonies, instead of misdemeanors. “This would result in an increase in court costs associated with new felony convictions ($15 million to $31 million), an increase in the cost of serving a larger population on probation with longer probation terms ($70 million to $232 million), and an increase in local jail and state prison costs resulting from additional incarceration ($69 million to $194 million),” the report authors state. “Simply put, it is more expensive to convict and punish felonies than misdemeanors.”

The measure, which was applied retroactively, changed the lives of tens of thousands of Californians by freeing them from the collateral consequences of felony records.

The final law, 2016’s Proposition 57, increased access to early release credits, as well as boosted parole eligibility for people convicted of certain crimes who have completed the base sentence for their primary offense.

Proposition 20 would add 51 crimes and sentence enhancements to the state’s legal definition of violent crime, which currently does not include felony domestic violence, child sex trafficking, rape of an unconscious person, or felony assault with a deadly weapon.

“Recent changes to parole laws allowed the early release of dangerous criminals by the law’s failure to define certain crimes as ‘violent,’ the measure’s introduction states. “These changes allowed individuals convicted of sex trafficking of children, rape of an unconscious person, felony assault with a deadly weapon, battery on a police officer or firefighter, and felony domestic violence to be considered ‘non-violent offenders.'” Prop. 20 would also add crimes like extortion, robbery, and possessing, exploding, or igniting a destructive device (even if that destructive device was only meant to be used to damage property, and even if it was only possessed — not used).

Police unions and some law enforcement leaders have accused these state-level criminal justice reforms of increasing crime rates. Prop. 47, specifically, has been accused of being responsible for increases in certain property crimes that followed in the wake of the proposition’s passage.

In 2018, researchers from the Public Policy Institute of California found what appeared to be a correlation between Prop. 47 and upticks in larceny. The measure did not, however, factor into the state’s short-term bump in violent crime, according to PPIC.

Moreover, the report found that Prop. 47 appeared to have contributed to a reduction in recidivism in California, while also lowering the prison and jail populations. A second report from the same institute, this one released in June of 2020, found that Prop. 47 helped to significantly reduce racial disparities in arrests and jail bookings in the first two years of implementation.

Prop. 47 has faced criticism for removing much of the incentive for people convicted of drug crimes (now no longer felonies) to participate in alternative drug court programs focused on rehabilitation. Prop. 20 proponents say their measure will address this issue, and require the development of re-entry programs.

The Association For Los Angeles Deputy Sheriffs (ALADS) and the Los Angeles Police Protective League (LAPPL) each contributed $2 million to the PAC funding the measure.

At the end of 2018, the California Correctional Peace Officers Association (CCPOA) also put $2 million into the Keep California Safe PAC. A month later, the union’s new president, Kurt Stoetzl, asked the PAC to return the money. “This contribution was made by our past president in the final hours of his term,” Stoetzl wrote in a letter to the PAC. “This contribution was made without the new leadership of CCPOA having the opportunity to evaluate the proposed initiative, to determine if the goals of your Issues Committee, and the initiative, are in step in the goals of CCPOA.”

While Prop. 20 was introduced and funded by law enforcement organizations, it is opposed by the Chief Probation Officers of California, as well as CCPOA and other unions and labor groups, according to Crime Survivors for Safety and Justice.

Los Angeles District Attorney Jackie Lacey, who is facing a fight for reelection against a candidate with a more left-leaning platform, announced her opposition to the measure late last month, as well, despite having opposed the very laws Prop. 20 would water down.

Prop. 20 is also opposed by major civil rights and justice organizations that continue to call for state and local leaders to prioritize community health over punishment.

The League of Women Voters, too, supports a “no” vote.

In their letter to the state’s mayors of the 13 largest cities, the crime survivor organizations note that all the savings from state-level reforms has allowed for the “creation of more than a dozen trauma recovery centers up and down the state that provide victims the wrap around services needed to recover.”

The groups note that while one-third of Californian residents have survived a crime in the last decade, too few “received the help they needed to recover” from the after effects of the crime. “Evidence has also shown us that zeroing in on community health, not incarceration, more effectively prevents crime.”

Passage of Proposition 20 would mean as many as 10,000 more people could end up in California prisons and jails, undermining the key pathway California lawmakers have used to reallocate resources from incarceration to local safety solutions,” according to the survivor groups. “Passage of Proposition 20 would also defund Trauma Recovery Centers, which primarily serve people of color and are critical lifelines for survivors of violence.”

“We cannot and must not turn back the clock,” the organizers write in the letter, sent to the mayors of Los Angeles, San Diego, San Jose, San Francisco, Fresno, Sacramento, Long Beach, Oakland, Bakersfield, Anaheim, Riverside, Santa Ana and Stockton.

This story was updated on Sept. 15, 2020, at 9:00 a.m., to clarify the position of the California Correctional Peace Officers Association with regard to Proposition 20.