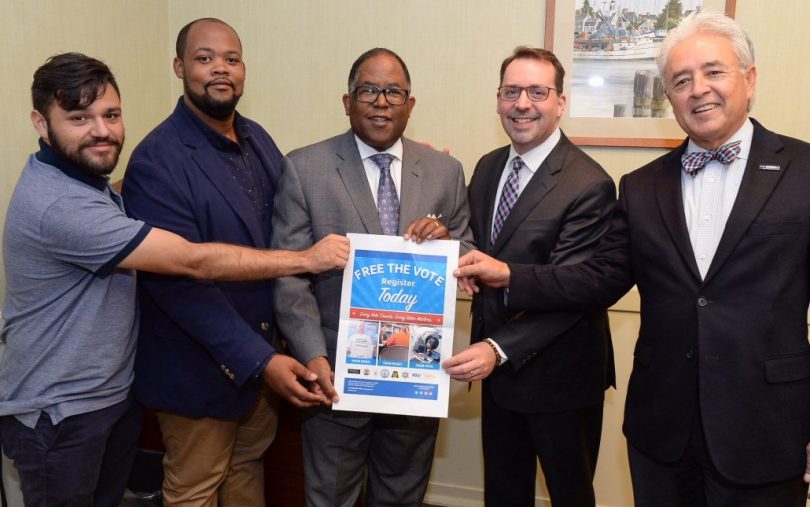 In July, the Los Angeles County Board of Supervisors approved a motion by Supes Mark Ridley-Thomas and Sheila Kuehl to create a “Voter Engagement Taskforce” focused on registering as many people involved in the criminal justice system in advance of the November 2018 general election as possible.

Two months later, LA County’s Office of Diversion and Reentry and the Registrar-Recorder/County Clerk returned to the board with a status update on efforts to register and engage previously or currently justice-involved residents before the October 22 voter registration deadline.

So far, thousands of incarcerated individuals have been registered to vote this year—a mighty victory considering confusion over voting laws keeps eligible voters from exercising their right to vote, often out of fear of possible prosecution. (Horror stories like those of Keith Sellars and Whitney Brown certainly don’t encourage justice system-involved people to vote.)

California law currently disenfranchises people convicted of felonies who are serving time in state or federal prison or who are on parole. Californians with felonies on their records can, however, vote once they have completed parole.

Those citizens locked-up for non-serious felonies serving time in county jails or under county supervision through California’s prison realignment (AB 109), are also allowed to vote, a right that was clarified and affirmed by AB 2466, a bill Governor Jerry Brown signed in 2016.

Several thousand incarcerated individuals have registered to vote, but the Voter Engagement Taskforce’s work is far from over.

“The election is fast approaching, and we can’t afford to miss the opportunity to engage our justice-involved residents in the work of their democracy,” Supervisor Mark Ridley-Thomas said. “The work and importance of this initiative go well beyond this November, however, as voting and civic engagement must be a lifetime commitment if it is to result in meaningful empowerment for these residents.”

So far the coalition has helped to register approximately 1,000 inmates at Pitchess Detention Center and the Century Regional Detention Facility. And through a partnership with the ACLU’s “Unlock the Vote” campaign, more than 2,000 inmates registered to vote in advance of this year’s primary election. (The ACLU has been working hard to bring jailed individuals into the ranks of voting citizens, and is even launching a civic engagement course for inmates with the sheriff’s department, said Retired Judge Peter Espinoza, head of the Office of Diversion and Reentry.)

The taskforce plans to ramp up registration efforts at Twin Towers Correctional Facility as well as at Men’s Central Jail, the latter of which will host a special event on National Voter Registration Day, September 25.

The voter registration forms are numbered, so the taskforce can keep track of where the newly registered voters are coming from—whether they’re in the jails, on probation, or are involved with another county department or service.

In addition to the inventoried registration cards, the county agencies and community organizations created “Free the Vote” toolkit, posters, and informational handouts about voting and why it’s important. The coalition also conducted training sessions for county law enforcement, public defenders, and others, to promote voter registration and civic engagement.