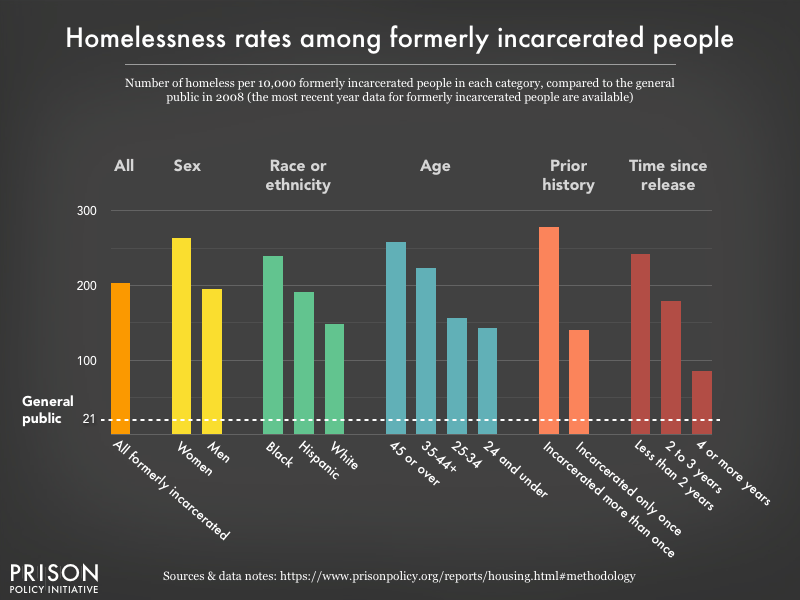 The United State’s 5 million formerly incarcerated people are nearly 10 times more likely to be homeless than the general public, according to a new report by Prison Policy Initiative that used data from federal homeless counts, census estimates, and the National Former Prisoners Survey.

The study found that two percent of formerly incarcerated were homeless in 2008–the most recent year that data was available–10 times the rate of homelessness nationwide.

Report author Lucius Couloute found homelessness rates to be particularly high among people who had been locked up two or more times.

Being recently freed from prison also greatly increased a person’s risk of homelessness, according to the report. During the first two years following release from prison, individuals were twice as likely to become homeless, when compared with people who had been out for four or more years.

Couloute stresses that these problems are not unsolvable. He recommends states and local jurisdictions employ better interagency systems focused on helping people find housing upon release. Long-term support is crucial, too. “Our analysis found that even people who had spent several years in the community were 4 times more likely to be homeless than the general public,” PPI said.

People of color, too, had higher rates of post-release unsheltered homelessness than their white counterparts. A total of 124 out of every 10,000 formerly incarcerated black men were living unsheltered, compared with 81 of every 10,000 white men.

Black women had sky-high levels of sheltered homelessness–nearly four times the rate of formerly incarcerated white men, and twice the rate of black men. This shows that “black women face severe barriers to housing after release,” the report states.

Yet, these numbers do not show the whole picture of homelessness and incarceration. Many more criminal justice system-involed Americans experience housing insecurity.

The report defines a person living with housing insecurity as someone who is homeless, or who lives in “marginal housing”–a motel, hotel, or rooming house. The report found that 367 of every 10,000 formerly incarcerated people lived in marginal housing.

Approximately 203 out of ever 10,000 people released from lockup were homeless, according to the report. The number more than doubled when people living in marginal housing were included: 570 out of every 10,000 were housing insecure.

Couloute noted that while he would have liked to compare housing insecurity rates for previously incarcerated people with the general population, there were not yet any comparable national statistics regarding housing insecurity.

Barriers to securing employment post-release, prior homelessness, as well as discrimination, lead to homelessness among the formerly incarcerated, according to PPI.

In addition to difficulties finding steady work, people reentering their communities have to contend with criminal record checks, and outright discrimination from public housing authorities and potential landlords, as well as serious affordable housing shortages, according to the report.

The report calls for the creation of statewide, interagency reentry systems to (among other things) help people find housing post-release.

“Even in states like New York, there is often ‘no central, coordinating force’ set up to ensure that people leaving prison will land somewhere other than a shelter, according to the report. “Improved systems should help incarcerated people understand their housing options before release; find pathways to both short-term and permanent housing; and receive financial supports, such as housing vouchers, from the state.”

Couloute also recommends regulating housing applications, and “banning the box” so that the formerly incarcerated are evaluated “as individuals,” and are not explicitly denied housing solely based on their criminal history.

The report urges local jurisdictions to end the criminalization of homelessness.

“Cities should end the aggressive enforcement of quality-of-life ordinances,” says Couloute. “Arresting, fining, and jailing homeless people for acts related to their survival is not only cruel; it also funnels formerly incarcerated people back through the “revolving door” of homelessness and punishment, which reduces their chances of successful reentry at great cost to public safety.”

At the local level, here in Los Angeles, the LAPD is considering a policy to address the homelessness-jail cycle, by allowing thousands of the city’s homeless to eliminate their old bench warrants for failing to show up to court for low-level offenses. (The department, however, says that it does not plan to change the way officers enforce so-called “quality of life” crimes).

The report also calls for officials at the local and state levels to increase social services for their homeless residents with a focus on “housing first,” which, according to the report will “help to disrupt the revolving door of release and reincarceration.”

In LA County, the sheriff’s department’s first quarterly report of 2018 revealed that more than 16 percent (2,873) of jail inmates (average daily population of 17,120) reported that they were homeless.

One way the county hopes to disrupt the jail-homelessness cycle is through voter-approved Measure H, under which $8.5 million has been set aside for prevention strategies meant to keep those at risk of homelessness—like people leaving jails and hospitals, foster youth, and those facing eviction.