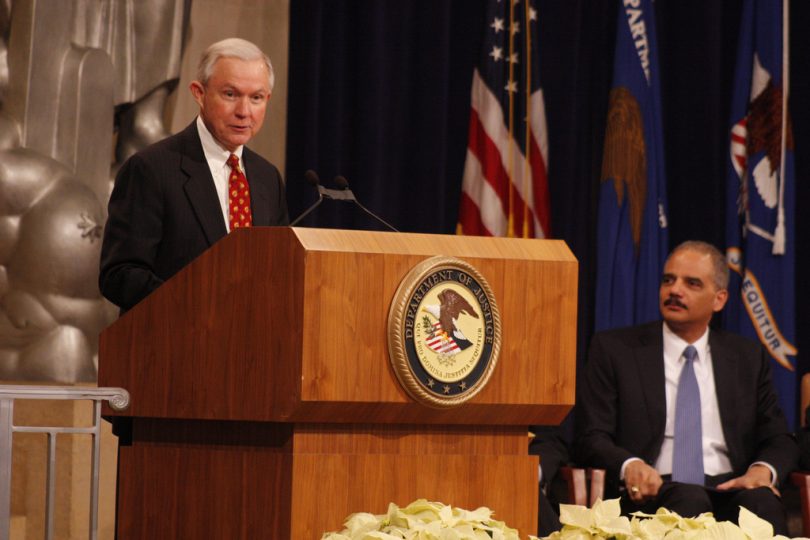 In a memo made public on Monday, US Attorney General Jeff Sessions directed the Department of Justice to conduct a review of the dozens of current reform agreements between troubled law enforcement agencies and the DOJ’s civil rights division.

“The federal government alone cannot successfully address rising crime rates, secure public safety, protect and respect the civil rights of all members of the public, or implement best practices in policing,” the memo reads. “These are, first and foremost, tasks for state, local, and tribal law enforcement.”

Part of the goal is to ensure that the federal reviews of local agencies promote officer safety and morale (and law and order). “The misdeeds of individual bad actors should not impugn or undermine the legitimate and honorable work that law enforcement officers and agencies perform in keeping American communities safe,” the memo reads.

The AG’s memo directs the Deputy Attorney General and the Associate Attorney General to review department activities including collaborative investigations and “existing or contemplated consent decrees.”

At the local level, a settlement was announced in August 2015, between the LASD and the DOJ to protect inmates from excessive force and to provide a safe environment, including “adequate mental health services,” for the mentally ill in the LA County’s jails, was welcomed by both sides. The agreement was the culmination of two DOJ investigations that span what is now nearly two decades of scrutiny of LA’s county lock-ups, starting in June 1996, “to determine whether the conditions in the jails violated the constitutional rights of its prisoners.”

Another LASD consent decree aimed at eliminating racially discriminatory practices at the sheriff’s stations in Lancaster and Palmdale is also among the agreements subject to review and reassessment.

In April 2015, the US Department of Justice and LA County agreed on a court-enforceable settlement to reform the Lancaster and Palmdale stations. The settlement followed two years behind a 46-page “findings” letter from the DOJ detailing systemic discrimination against black (and to a lesser extent, Latino) Antelope Valley residents. The DOJ investigation found that officers from the Antelope Valley stations were conducting racially biased searches and seizures, using excessive force against people already in handcuffs, and harassing and intimidating Section 8 housing voucher holders along with the county Housing Authority with the intent to oust residents and push them into moving out of the area. There are 150 requirements that the department must meet to fulfill the terms of the settlement. The reforms are monitored by a federal judge, and include an updated use-of-force policy, improved training, and more.

McDonnell, who was at the LAPD during the period when that agency was operating under a federal consent decree, says he’s proud of the reforms that have taken place within the Antelope Valley stations. “When I look at consent decrees as vehicles for change, they were very onerous but it created mandated change that was beneficial long term to the organization.”

(On Wednesday, the LA County Office of the Inspector General presented a quarterly report on its continued monitoring of the conditions within the county’s jail facilities, on the department’s use of force incidents and allegations of misconduct, and other reform efforts.)

SO HOW ARE OTHER LOCAL GOVERNMENTS REACTING TO THE MEMO?

The SFPD reforms are overseen by the DOJ’s Office of Community Oriented Policing Services (COPS). This form of review, rather than forcing reforms upon an agency, makes recommendations and leaves compliance up to city or county officials. The city’s new police chief, William Scott (a well-liked former LAPD Deputy Chief), and the city’s mayor, Ed Lee, are committed to completing implementation of all the recommended reforms.

In Maryland, the Justice Department asked a federal judge for a 90-day break to review a proposed consent decree between the feds and the Baltimore Police Department. (The feds can’t just dump a consent decree. Once it’s in the hands of an overseeing judge, it’s up to the judge to decide when to terminate the agreement.) The DOJ made the request less than a week before a scheduled hearing to gather public comment on an agreement reached by Obama’s Justice Department and the city of Baltimore. On Wednesday, U.S. District Judge James K. Bredar denied the DOJ’s “eleventh hour” request for a 90-day pause. The city’s consent decree agreement came after the feds found a pattern of discriminatory and unconstitutional policing within the city. Baltimore Mayor Catherine Pugh and Police Commissioner Kevin Davis came out against the DOJ’s request, saying they were “strongly opposed” to delaying the consent decree.

In New Orleans, the monitor for the NOPD’s consent decree said that there would be no changes made to the agreement. “The court will continue to monitor the implementation of the decree that benefits the citizens of New Orleans and is supported by the city and the police department,” monitor Jonathan Aronie told NOLA.

Seattle City Attorney Pete Holmes said the same would be true for the Seattle Police Department, which has been operating under a consent decree for five years.

Not everyone is unhappy with the idea of reducing the use of federal intervention in local departments, however. Many local law enforcement officer unions believe the tool is overused and can impede law enforcement, the New York Times reports.