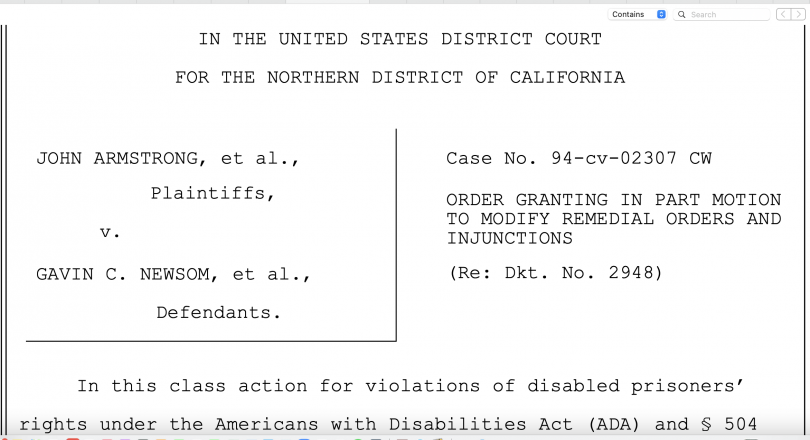 On Thursday, March 11, Senior U.S. District Judge Claudia Wilken handed down a  blistering ruling that ordered the California Department of Corrections and Rehabilitation to institute a series of changes with which the judge hopes to put a stop to what she describes as a pattern of systemic abuse of incarcerated people with disabilities at five of the state’s prisons.

The abuse and various related violations were documented in more than one hundred declarations by present and past residents of the prisons, along with other evidence that, according to Judge Wilken, suggests that the CDCR has been aware of these problems for years.

In her 71-page ruling, Wilken described a disturbing pattern of abuse of the five lock-ups’ residents who qualify for special accommodations under the Americans with Disabilities Act (ADA). 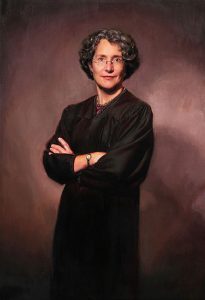 These disabled residents “are vulnerable to abuse,” wrote Judge Wilken, “and less able than others to defend themselves in light of their disabilities.”

In the text of her ruling, the judge listed some of the incidents described in the declarations. In many cases the incident begins when a prison resident asks for some kind of accommodation that he or she needs, and how the request is refused. Then, in certain of the cases, some brand of physical abuse follows after the refusal.

The residents also report how they are discouraged from accessing the various prisons’ grievance processes in order to report the abuse they have experienced, or to document that they are being denied what they need to function adequately, given their disability.

A large part of the problem, according to the judge, has to do with the CDCR’s system of investigating staff misconduct which remains “deficient and ineffective.”

Thus, according to the ruling, if residents with disabilities do persist and try to file a grievance alleging abuse, violence, or neglect — or all three — the investigative system “cannot be relied upon to hold wardens and staff accountable.”

Judge Wilken’s assessment of the CDCR’s grievance system is strongly supported by a recent report issued by the California Office of the Inspector General, on February 16, 2021, which mirrors her conclusions.

In the February report, the OIG wrote that, despite the fact that the state had just spent nearly $10 million a year to improve its handling of inmates’ allegations of staff misconduct, the CDCR’s investigative process “remains broken” and is “neither independent nor fair.”

As it happens, this is far from the first time the judge has taken a good hard look at the CDCR’s broken system when it comes to incarcerated men and women with disabilities.

Yet, although, between 1996 and now,  the judge has issued a series of further orders,  very little appears to have changed.

And the judge is not happy.

“….the court has found,” she wrote in the ruling released last week, “that staff failed on numerous occasions to reasonably accommodate the disabilities of disabled inmates.”

With all of the above in mind, Judge Wilken has now ordered her own remedial prescription for the five prisons named in this newest ruling.

The main change that Wilken has now ordered is the installation of surveillance cameras, which are to cover all areas of each of the five facilities to which disabled residents have access.

Furthermore, all correctional officers at the same five prisons, must begin using body-worn cameras, according to the new order, if they “have any interactions with disabled inmates.”

As for the footage gathered by the cameras, if it in any way documents use of force “and other triggering events involving disabled inmates,” it must be retained “indefinitely.” Furthermore, that footage is to be be “reviewed and considered as part of the investigation of any incident.”

Judge Wilken ordered other changes, such as a mandate for the CDCR to develop a system to monitor and control how much pepper spray is used on disabled inmates. She has also ordered a new electronic system to track incidents of misconduct.

In addition, the CDCR must reform the staff complaint and disciplinary process, and increase supervisory staffing.

And just to make sure the above gets done, Judge Wilken has appointed an expert to oversee the CDCR’s implementation of the mandated reforms.

Interestingly, according to the attorneys at Rosen, Bien, Galvan & Grunfeld, the firm that brought the lawsuit, Judge Wilken’s recent orders were built upon earlier orders that she issued in September 2020, after finding similar violations and at R.J. Donovan Correctional Facility (“RJD”) in San Diego.

The Donovan order represents the first time that correctional officers have been required to wear body cameras inside a California prison.

The body of the ruling portrays a pattern of everyday humiliations experienced by those with disabilities, such as the resident who was allegedly repeatedly denied the assistance needed to take an ADA shower, to the point where the resident just stopped asking.

In other declarations, incarcerated people described being pepper sprayed severely when they reportedly presented no threat.

In one such case,  a man suffering from extreme depression at LAC requested an appointment with his mental health clinician after he learned “his father had been diagnosed with cancer. ” Instead, he was pepper sprayed, wrote the judge.

In another case, a man who asked for his prescribed medication was reportedly beaten by a corrections officer, according to the declaration of a witness who reportedly viewed the incident. The man, like some of the others, is now reportedly afraid to ask for any kind of appropriate treatment.

Sometimes the stories simply describe neglect, such as the man who is deaf who reportedly requested the appropriate hearing device that the prison is required to provide for him.  The man reportedly made the request in February 2020, but was not provided the hearing device until June 2020 — four months later.

In addition to the alleged abuse of those with physical disabilities, the ruling describes multiple abusive situations involving prison residents who have been classified as belonging to the specialized category of EOP, “Enhanced Outpatient Placement,” due to a diagnosis of severe mental illness, meaning “they require special housing,” and “special programming.”

Although prison officials disputed the accusations in general, according to Judge Wilken, CDCR officials failed to submit any evidence that countered the accounts of the prisons’ residents,  things like declarations by the officers who allegedly engaged in intimidation, threats, or coercion, in order to “dispute the occurrence of these incidents.”

In general, the judge wrote that she “found the inmate declarants to be credible,” in part because their descriptions of the behavior of the staff were “remarkably consistent,” and very detailed.

She also found them credible, she wrote,  because the CDCR presented no evidence that contradicted the version of events described in the declarations by inmates describing how staff had “threatened, intimidated, or coerced them when they requested reasonable accommodations, or indicated that they would file ADA-related grievances, and that this has caused them to refrain from requesting accommodations or filing ADA grievances,” even when they are experiencing “severe emotional distress.”

The experts and the ruling

As mentioned above, the CDCR didn’t bother putting forth evidence or declarations disputing the accounts of the individual prison residents. What they did instead, according to the judge, was to hire three “experts” to examine whether there was any “systemic denial” by the staff of the accommodations to which those with disabilities had a legal right, in the five named prisons.

Unsurprisingly, the CDCR’s experts — one of whom was former Secretary of the CDCR, Matthew Cate — all more or less sided with the state.

Judge Wilken noted Cate’s perspective on the case, then dismissed it, concluding that the staff in the five facilities had “failed to provide reasonable accommodations for disabled inmates’ disabilities,” that the staff engaged in unwarranted uses of force “such as throwing disabled inmates out of wheelchairs, punching them, kicking them, or using pepper spray — where the undisputed evidence shows that the disabled inmates pose no threat to staff that would warrant the use of such force.”

Based on the totality of the evidence, the judge concluded, “staff target inmates with disabilities and other vulnerable inmates for mistreatment”

Gay Grunfeld, one of the civil rights attorneys for the plaintiffs called Wilken’s ruling, “a great victory for incarcerated people with disabilities.”

The ruling, according to Grunfeld, will make it possible to “get some information and visibility on where the problems are so people can be held accountable.”