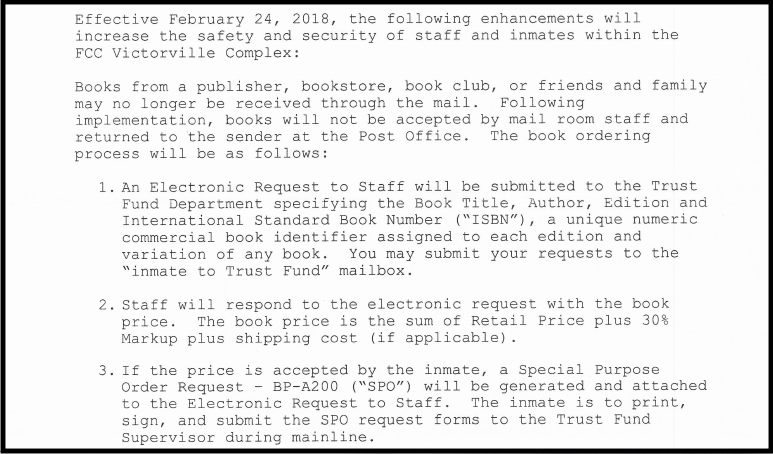 On Thursday, the U.S. Bureau of Prisons rolled back a policy deemed by many to be “a discriminatory and destructive attack on access to literature and other reading and educational materials for thousands of people in prison,” that effectively shuts inmates “off from works that can reduce recidivism and better connect them to the outside world,” according to Summer Lopez, Senior Director of Free Expression Programs for PEN America.

The controversial policy banned federal inmates from receiving books from bookstores (including online sellers), publishers, and book clubs, as well as family and friends. The policy, in place at several federal prisons, including in California, restricted inmates and their loved ones’ ability to purchase books to a limited number of books available through the Bureau of Prisons’ specific vendor at a markup of 30 percent over retail, plus shipping.

Prior to the restrictions, inmates could purchase books through bookstores, publishers, and book clubs to be shipped to prison, as long as the books were not “deemed to pose a threat or detriment to the security, good order or discipline of the institution or to encourage or instruct in criminal activity.”

“Following implementation [of the policy], books will not be accepted by mail room staff and [will be] returned to the sender at the Post Office,” according to a memo from Victorville Prison Warden David Shinn to inmates at the prison complex.

Moreover, inmates must be able to provide BOP staff with publication-related details about the book that would likely be difficult for inmates to procure, including its ISBN number.

According to the BOP, the unpopular rules were meant to help curb the flow of drugs into federal prisons through the mail.

“Over the past year, each institution within this Complex has experienced multiple occurrences involving illicit drugs,” Shinn’s memo states. “Based on attempts to introduce narcotics via regular mail, legal mail and phones; unauthorized positive urinalysis; inmate on inmate assaults; and inmate on staff assaults, I have determined the necessity of implementing heightened mail-monitoring procedures.”

One rule said that an inmate could not contact a person—be it family member, friend, or another contact—already listed on another inmate’s approved contact list, unless the person was an attorney or clerk of the court or was approved on a case-by-case basis.

Research has consistently shown that contact with family is extremely important for a former offender’s successful reentry into their community, but many families simply cannot afford to visit loved ones locked up far from home.

Inmates could also no longer receive handmade cards or letters on paper that is not white or that has crayon or marker drawings or writing, under the rules listed in the Victorville memo. Commercial cards would be photocopied and the inmate would receive the photocopy.

Additionally, all envelopes from inmates’ legal counsel would be opened, and inmates would receive a photocopy of the envelope, rather than the physical envelope, along with their legal correspondence.

“It appears that all legal mail is now being opened and envelopes retained by prison staff,” one attorney said prior to the policy reversal. “Consequently, inmates’ legal mail is more likely to be in plain view of prison staff and other inmates. This vitiates the attorney-client privilege, and exposes inmates to a greater risk of danger if–for example–their cooperation with law enforcement, or other sensitive information, is reflected in legal correspondence.”

On Thursday, the BOP, facing a barrage of criticism, told the Washington Post that the federal policy had been rescinded.

Before BOP announced a rollback of the policy, a coalition of lawyers was gathering to write a letter to U.S. Senators Dianne Feinstein and Kamala Harris urging them to take action against the policy.

“They heard we were coming and ran from the battlefield,” said Evan Jenness, a criminal defense attorney who formerly served as a deputy federal public defender.