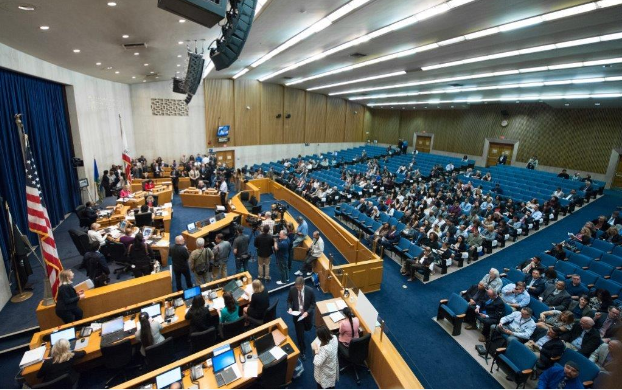 The LA County Board of Supervisors called for an analysis of whether a portion of the county’s civil service rules should be amended to make it easier for law enforcement officials and other county executives to discipline, reassign, or fire employees who are dishonest.

The motion, put forward by Supervisors Mark Ridley-Thomas and Sheila Kuehl, would look into reforming the civil service hearing process for county employees involved with public safety and custody (as well as mandated reporters, like social workers). “The job of the peace officer simply cannot be entrusted to anyone who is not scrupulously honest,” the motion reads. The motion will look at whether the civil service rules should be amended to allow for discharge, reassignment, or discipline for county employees who have given false statements, misrepresentations, or omissions of material facts in investigations.

In the case of a deputy who has admitted to lying on hundreds of police reports, a “dysfunctional discipline system” has prevented the sheriff’s department from firing the deputy, said Max Huntsman, Inspector General for the LASD. “Civil service reform is a critical part of repairing that process.”

“If there is a question of whether the disciplinary systems here in our county are effective enough, we have an obligation to address any gaps in a manner that is fair and transparent while, at the same time, honoring and respecting employee rights,” said Board Chair Ridley-Thomas.

“The motion will provide the board of supervisors with the tools we need to hold our employees accountable if they violate that trust and lie in internal investigations,” Supervisor Kuehl added.

In Brady v. Maryland, the US Supreme Court ruled that the prosecution is required to hand over any and all evidence that would clear or exonerate a defendant charged with a crime. Exculpatory evidence includes evidence that a witness (in this case a law enforcement officer) has lied in the past. The DA’s Office keeps what is known as a “Brady List” of local law enforcement officers who have been found to have lied or acted dishonestly.

The motion will also launch an assessment of which county positions should be subject to a Brady List or the amended Civil Service Rule—“including, but not limited to, those positions with peace officer status, custodial duties, and mandated reporting responsibilities that require a high degree of honesty and directly impact public safety where lives are at stake.”

LA County Sheriff Jim McDonnell has been pushing for greater accountability regarding dishonest deputies. In February, an appeals court blocked Sheriff McDonnell from giving the LA County District Attorney’s Office a “Brady List” containing 300 names of sheriff’s department members who were found by the department to have engaged in dishonest activities that would qualify as exculpatory information for a defendant in a criminal case. (Those activities included making false statements, obstructing an investigation, using unreasonable force, and more.)

Ridley-Thomas and Kuehl’s motion says that “District Attorneys, Sheriffs and Police Chiefs should track and prepare “Brady Lists” to comply with their constitutionally mandated duties, to avoid the risk of liability and to protect communities and municipalities.”

A number of people who testified in support of the motion mentioned that they were concerned by recent major events involving county workers, including last month’s conviction of former Sheriff Lee Baca, who lied and obstructed a federal investigation. County probation officers were also charged after a videotaped surfaced showing officers beating a juvenile held at Barry J. Nidorf Juvenile Hall in Sylmar. (WitnessLA first reported this story last June.)

Daniel Heimpel, founder of the Chronicle of Social Change, pointed to a case involving LA County social workers who were charged in connection with 8-year-old Gabriel Fernandez’s death at the hands of his mother and her boyfriend. Heimpel noted that the county’s current civil service rules resulted in the reinstatement of one of the social workers who had been fired for (and later charged in) the boy’s torture death. The board’s push for an accountable and transparent system, “not only helps social workers do their job better but it will also help protect the children,” Heimpel said.

Merrick Bobb, the supes’ former Special Counsel providing oversight of the sheriff’s department, added that the motion is “necessary for expanding accountability and for increasing transparency,” two goals that are “critically important to maintain the integrity of the system.”

Photo by Bryan Chan/LA County Board of Supervisors.