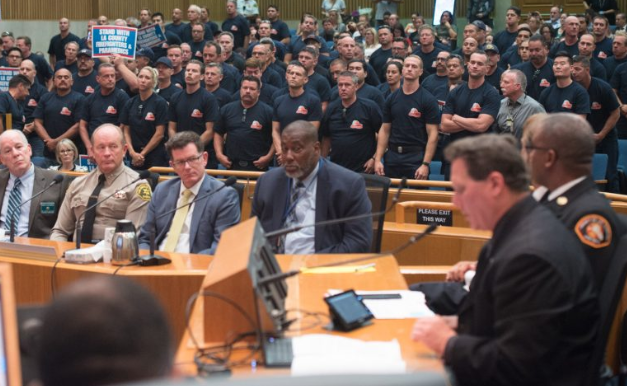 On Tuesday, the Los Angeles County Board of Supervisors unanimously approved a motion focused on preventing suicide and treating PTSD, depression, and other mental health issues that LA County’s first responders face.

In their motion, Supervisors Kathryn Barger and Janice Hahn cited a white paper study by the Ruderman Family Foundation, which found that law enforcement officers and firefighters are more likely to commit suicide than to die in the line of duty.

In 2017 alone, there were approximately 140 police officer suicides and 103 firefighter suicides nationwide, according to the Ruderman study.

During the same year, 129 law enforcement officers and 93 firefighters died in the line of duty.

According to one study included in the white paper, police officers witness an average of 188 “critical incidents” during the course of their careers. That compounded trauma, and the shame and stigma surrounding PTSD and mental health care treatment, can have a devastating impact on first responders.

“These brave men and women face extremely tough situations every day, sacrificing so much to save the lives of others – they deserve our help to save theirs,” said Supervisor Barger.

The supes praised the bill, but argued that other county employees whose work involves emergencies and their aftermath should have access to such a peer-to-peer support network, according to the motion.

“The County should broaden the scope of this state pilot in order to mitigate the occupational stress of not only firefighters, but coroner death investigators, sheriff’s personnel, emergency medical teams, and any other County employee who regularly is called to assist in the aftermath of critical incidents,” Supervisors Barger and Hahn said in their motion.

Public safety agencies are experiencing a “suicide epidemic,” Dave Gillotte, president of the local firefighters’ union, told the board on Tuesday. “As a professional firefighter, paramedic, and engineer, and now a fire captain, I, like my peers out here, have seen many things that I can’t forget. I have held death in my arms. They have held death in their arms many times.”

“The immediate and often cumulative effects” of firefighting work take a toll, Gillotte added. “LA County firefighters are no stranger to this pain.”

Gillotte pointed out that the county departments do have suicide prevention and mental health services in place, but that they could stand be more robust.

John Sherin, the director of LA County’s Department of Mental Health, said that beyond responding to suicidality when it has hit breaking point, the county must “think proactively” about how to identify those at risk of suicide, as well as how to “go after them in a preventative way to assess their risk and offer solutions.”

The board should consider that staffing shortages among first responder agencies can seriously negatively impact the mental health of workers, according to Robert Shick, a fire captain who addressed the board on Tuesday. “One single day off is insufficient to make up for missed time [with family],” Shick said. “I go back to work unrested,” after being “consumed with projects at home, and kids who need me.”

Tuesday’s motion directs the LA County Fire Department, the LA County Sheriff’s Department, the county coroner’s office, the County CEO and other departments to review policies, programs, and services that address the issues of suicide prevention, stress from critical incidents, and trauma-informed education and outreach to first responders, as well as emergency room workers, and crime scene personnel. The board also seeks data on suicide fatalities among those populations.

The motion also directs the LASD, LAcoFD, and the others to seek the assistance of experts in suicides among first responders, so that the county can improve policy, education, and outreach on the issue, as well as develop training for colleagues and supervisors to develop the ability to “recognize the warning signs of suicide and trauma” among their ranks. The motion also directs the group to look at the “best practices” employed in other jurisdictions. The county departments must report back to the supervisors in 90 days with the information gathered.