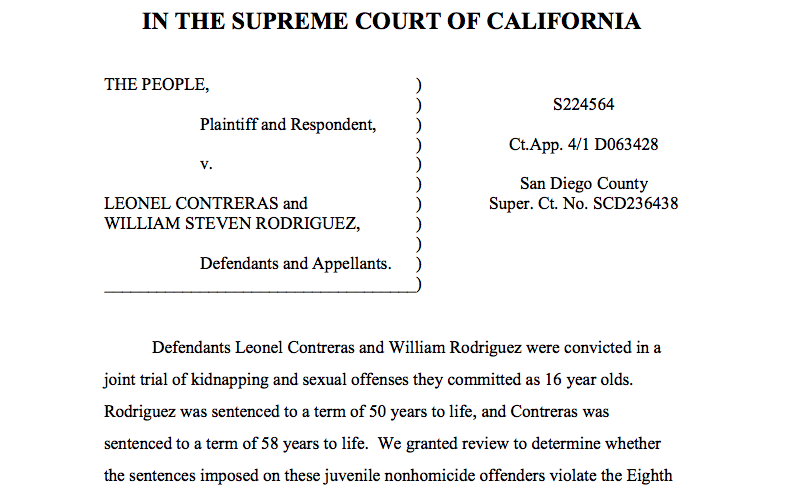 In a 4-3 decision Monday, the California Supreme Court ruled that juvenile sentences of 50 years or more for non-homicide crimes are unconstitutional in that they don’t give minors who are “constitutionally different from adults for purposes of sentencing” a reasonable chance for release during their lifetimes.

The defendants in the case, Leonel Contreras and William Rodriguez, were convicted of kidnapping and raping two teenage girls at knifepoint in 2011. Contreras and Rodriguez, both 16 at the time of the crimes, were charged in as adults and sentenced in 2012 to 58 years to life and 50 years to life, respectively.

In 2010, the U.S. Supreme Court ruled in Graham v. Florida sentencing juveniles to life without parole (LWOP) for crimes other than murder constituted a violation of the Eighth Amendment ban on cruel and unusual punishment.

In a related 2012 case, People v. Caballero, the California Supremes held that a minor’s 110 years to life sentence for three counts of attempted murder would effectively serve as a life-without-parole sentence, in violation of Graham.

The high court looked at whether the sentences handed down to Contreras and Rodriguez violated the Eighth Amendment based on the Graham, Caballero, and/or the U.S. Supreme Court’s Miller v. Alabama decision, which found mandatory life sentences without a possibility of parole for juveniles who commit murders to be unconstitutional. On Monday, the California Supreme Court found the Contreras-Rodriguez sentences to be “unconstitutional under the reasoning of Graham.” According to the CA justices, sentences must give juveniles a chance of some life on the outside, otherwise, the sentences are the functional equivalent of LWOP.

According to the majority opinion, Rodriguez will be 66 and Contreras will be 74 years old when the two first become eligible for parole. The California Attorney General’s Office has stated that “any term of imprisonment that provides a juvenile offender with an opportunity for parole within his or her expected natural lifetime”–based on life expectancies calculated by the Centers for Disease Control–“is not the functional equivalent of LWOP.”

“For any individual released after decades of incarceration, adjusting to ordinary civic life is undoubtedly a complex and gradual process,” Justice Godwin Liu wrote for the majority. “Confinement with no possibility of release until age 66 or age 74 seems unlikely to allow for the reintegration that Graham contemplates.”

Liu points out that according to Graham, “[a] young person who knows that he or she has no chance to leave prison before life’s end has little incentive to become a responsible individual.” The majority in Monday’s opinion agreed that the same would be true for a juvenile serving a 50-year sentence.

And although 50 years to life is not as harsh a sentence as LWOP, it remains an “especially harsh punishment” for a minor, according to the majority. And as with an LWOP sentence, a 50-year sentence for a juvenile will mean “more years and a greater percentage of his life” behind bars than an adult who receives a similar sentence.

The ruling garnered a 38-page dissent from California Chief Justice Tani Cantil-Sakauye, who said as long as there is a chance for parole in a juvenile’s lifetime, a lengthy sentence like those given to Contreras and Rodriguez are justified.

The chief justice argued that the teens’ initial sentences granted them a chance at parole no later than age 60 because of AB 1448, a bill signed into law at the end of 2017, which established an Elderly Parole Program. Through this program, prisoners who have served at least 25 years of a prison sentence and are at least 60 years old are eligible for a parole hearing. According to Cantil-Sakauye, a “sentence offering an opportunity for parole no later than age 60 is not invalid under Graham.”

Justice Liu disagrees with Cantil-Sakauye’s reliance on a bill passed just a few months ago. The chief justice’s interpretation of the bill “is not the only plausible reading of the elderly parole statute, and we decline to issue a definitive interpretation less than five months after the statute’s enactment, before any Court of Appeal has filed a published opinion applying it in the context of juvenile sentencing, and before CDCR has adopted any implementing regulations.” It’s not clear that the new law would ensure that juvenile offenders the “meaningful opportunity to obtain release based on demonstrated maturity and rehabilitation” that Graham intended.

Cantil-Sakauye also pointed out that Graham said that a life without parole sentence was the “second most severe” punishment allowable by law.

“Today, the majority declares unconstitutional a range of sentences that most certainly are not the second most severe penalty permitted by law; that do offer hope of restoration of basic liberties; that do not necessarily mean that defendants will remain in prison for the rest of their days; and that do give a chance for fulfillment outside prison walls, do give a chance for reconciliation with society, and do offer hope,” Cantil-Sakauye wrote. “In short, the majority extends Graham to invalidate an array of sentences that are qualitatively different from the sort of punishment that Graham was concerned with.”

According to the chief justice, her colleagues are asserting “unconvincingly” that within the Graham ruling lies “a more far-reaching intent to invalidate all sentences that do not provide juvenile offenders convicted of nonhomicide crimes with an opportunity for parole at an age when release would, in the majority’s view, be sufficiently conducive to their full reintegration into society.”

Both Contreras and Rodriguez will be resentenced under this latest ruling. The California high court has directed the sentencing court to “to consider, in light of this opinion, any mitigating circumstances of defendants’ crimes and lives, and the impact of any new legislation and regulations on appropriate sentencing.” The sentencing court will also have to select a time at which the defendants will be able to seek parole.