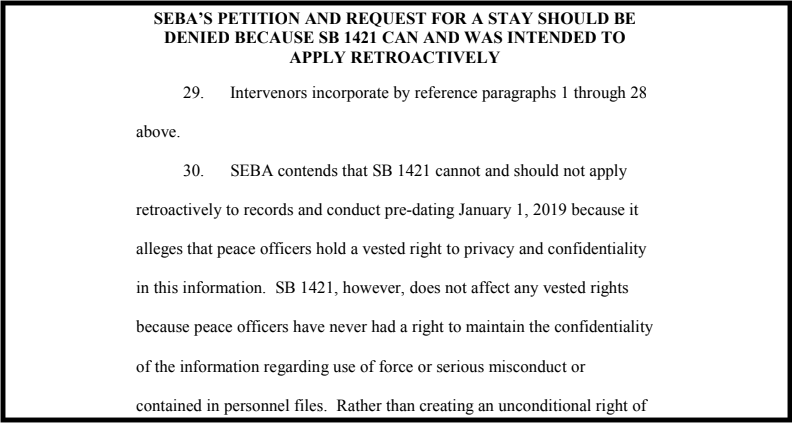 On Wednesday, January 2, the California Supreme Court shut down a San Bernardino Sheriff’s Department union’s last-ditch efforts to drastically shrink the scope of a new police transparency law. The law, SB 1421, which went into effect on January 1, will grant the public long-denied access to law enforcement personnel records in the name of accountability and transparency.

Starting in 1978, California barred public access to police misconduct and use of force records, making it the most secretive state in the country when it came to law enforcement records. (Even in Texas, the public gains access to personnel information once a law enforcement agency finds an officer has committed misconduct.) Prosecutors in California have not even been allowed access to records of officers found guilty of committing misconduct under the color of authority, even those with a history of planting evidence or lying in police reports.

The new law requires law enforcement agencies across the state to release records related to incidents in which officers use force—specifically, when cops discharge their firearms or Tasers, use a weapon to strike a person’s head or neck, or use force that results in serious bodily harm or death.

Under SB 1421, the public will also be able to access personnel records of officers who are found to have been dishonest in the “reporting, investigation, or prosecution of a crime.”

Some law enforcement opponents of the new law, including the SBSD employees’ union, resolved to put up a fight, however.

On December 18, the union petitioned the court, seeking to determine whether SB 1421 is to be applied retroactively to all police records, or only to those created after Jan. 1. In the meantime, the union wanted the justices to put the law on hold.

The union’s “represented peace officers will suffer irreparable injury and damage by the retroactive application of SB 1421 in that such an application would unlawfully violate the constitutional and statutory protection of peace officers to the confidentiality of their peace officer personnel records regarding incidents or reflecting conduct occurring prior to January 1, 2019,” the petition states.

The union’s petition included a letter from the LAPD’s new police chief, Michel Moore, expressing “concern that Senate Bill 1421 (SB 1421) may be interpreted as retroactive,” thus putting an untenable strain on police resources. “Since the passage of SB 1421, the LAPD has been preparing for the massive influx in historical records requests it anticipates starting January 1, 2019,” Moore wrote to Sen. Nancy Skinner, the bill’s author. “If SB 1421 is implemented retroactively, the workload on the men and women of the LAPD could prove well beyond any reasonable expectation given the sheer volume of personnel complaints and uses of force (UOF) maintained in antiquated or archaic formats.”

First Amendment Coalition and News Groups Stand up for SB 1421

The First Amendment Coalition (FAC), along with the LA Times, KQED, and California News Publishers Association Services (CNPA), filed a brief seeking to challenge the union’s petition. “Remedial statutes [like SB 1421] must be construed liberally to further their purpose, and the purpose of SB 1421 would be substantially eroded if it applied only to conduct occurring after its effective date,” the FAC-led brief states. “Preventing the retroactive applicability of the SB 1421 would undermine its purpose and the public’s right to know all about serious police misconduct, officer-involved shootings, and other serious uses of force by police, in contravention of the plain intent of the Legislature. Thus, SEBA’s Petition is without merit and should be denied.”

The union, according to FAC, “alleges that peace officers hold a vested right to privacy and confidentiality” with regard to the records SB 1421 affects. However, the new law “does not affect any vested rights because peace officers have never had a right to maintain the confidentiality of the information regarding use of force or serious misconduct” found in police personnel records.

The two sections of the Penal Code that SB 1421 amends, 832.7 and 832.8, did not create “an unconditional right of privacy or confidentiality to this information,” the brief says. The two sections “merely provided procedural protections governing the disclosure of personnel records.”

“Such information has always been subject to disclosure in criminal and civil litigation by way of Evidence Code sections 1043 and 1045,” according to FAC and the news orgs. “SB 1421’s amendments to Penal Code sections 832.7 and 832.8 simply expand procedures that can be utilized to obtain and disclose certain categories of information by allowing disclosure through CPRA requests in addition to litigation discovery requests and orders.”

Moreover, the brief says, legislators meant for SB 1421 to open up the misconduct records “regardless of when the conduct occurred or when the records were created.” Otherwise, lawmakers would have embedded time restrictions within the bill.

“The legislative history shows that the Legislature recognized from the outset that SB 1421 was retroactive in nature and passed it with that understanding,” the court doc continues. “Third, the Legislature passed SB 1421 in the context of public debate regarding access to information on police misconduct and use of force, and the legislative history specifically refers to incidents in which members of the public were thwarted from obtaining meaningful information regarding past incidents and investigations of use of force by police―information that would not be available if the Legislation is not retroactive in application.”

Fighting SB 1421 With a Shredder

The SBSD employee’s union is not the only party that has taken steps to blunt the force of the new law.

Earlier this month, in anticipation of SB 1421 going into effect, the Inglewood City Council voted to destroy more than 100 Inglewood PD shooting records and other internal investigation documents.

The FAC brief addressed the issue, calling on the state’s high court to immediately ban police agencies from destroying records that would be subject to disclosure under the new law, if the justices chose not to deny the law enforcement union’s petition for an injunction against SB 1421.

In addition to denying the SBSD union’s petition, on Wednesday, the California Supreme Court brought questions related to SB 1421 into a separate case before the high court.

In 2017, then-Los Angeles County Sheriff Jim McDonnell tried to hand over a list of approximately 300 LASD members accused of lying and other misconduct to the LA County District Attorney’s Office. The local deputies’ union, the Association for Los Angeles Deputy Sheriffs—or ALADS—sued to stop McDonnell from sharing the so-called “Brady list” with the DA, a move McDonnell said he believed was in compliance with the 1963 US Supreme Court Brady v. Maryland ruling that required prosecutors give defense attorneys any potentially exculpatory evidence–including if a testifying officer has a history of dishonesty.

A state appeals court ruled in favor of ALADS in 2017, and McDonnell appealed the decision.

Now, the issue of McDonnell’s Brady list is before the state supreme court. On Wednesday, the justices asked both parties in the lawsuit—ALADS and the sheriff’s department (now headed by the newly elected sheriff, Alex Villanueva) to brief the high court on “what bearing, if any” SB 1421 has on the issue of police agencies sharing their Brady lists with prosecutors.

The parties must file their briefs with the court before the end of the month.