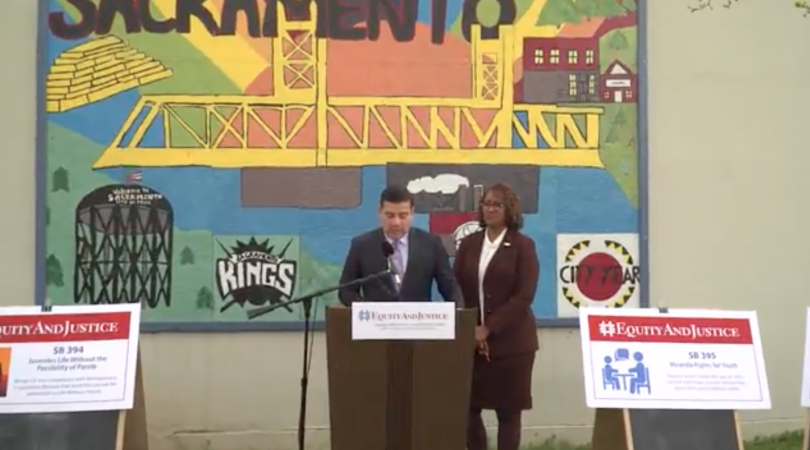 On Monday, California Senators Holly Mitchell (D-Los Angeles) and Ricardo Lara (D-Bell Gardens) introduced a package of eight important bills aimed at keeping kids out of the juvenile justice system and reforming the justice system for both adults and juveniles.

In May of 1967, the US Supreme Court ruled that kids accused of crimes must be given the same due process as adults, including the right against self-incrimination. Fifty years later, research shows that teenagers are fundamentally different from adults, and teens’ brains (notably the areas of the brain governing impulse control, critical thinking, and consideration of consequences) continue developing into adulthood.

Lara and Mitchell’s SB 395 takes this research into account, and would require that kids under the age of 18 consult with an attorney before they are interrogated by police, and before they waive their Miranda rights.

“Young people learn differently from adults, they make decisions differently, and they need a different approach from law enforcement,” Sen. Lara said. “Expanding Miranda protections are critical because a child is more likely to give a false confession, and that hurts the child and the investigation.”

Currently in California, children—no matter how young—can waive their Miranda rights, whether they understand what that choices means or not. Juveniles, particularly vulnerable to psychological interrogation techniques and prone to impulsiveness, are far more likely than adults to give false confessions. A 2005 study of 340 exonerations found that 42% of juvenile cases involved a false confession.

Lara and Mitchell introduced a similar bill last year, in the wake of what is known as the Joseph H. case. In 2011, a 10-year-old with developmental disabilities named Joseph shot his abusive neo-Nazi father, Jeffrey Hall, in the head while he slept. The night before, the elder Hall had threatened to burn their Riverside home down while his family was sleeping.

When a police detective asked Joseph if he understood his right to remain silent, the boy answered, “Yes, that means I have the right to remain calm.” Joseph was permitted to waive his Miranda rights and confess to the murder. California’s Supreme Court denied a petition on behalf of Joseph to review the case, and later the US Supreme Court refused to take up the case.

Another bill, which we highlighted to last week, aims to get rid of the fines and fees levied against families of juveniles involved in the justice system.

SB 190 would eliminate the collection of fees from families for kids’ juvenile justice system-involvement. These fees can cost up to $30 a day for juvenile detention, and $17 a day for use of an ankle-monitor, and often place a serious financial burden on poor families.

With SB 394, Mitchell and Lara hope to bring California into compliance with a US Supreme Court ruling that the 2012 Miller v. Alabama decision—which declared mandatory life-without-parole sentences for juveniles to be unconstitutional—must be applied retroactively. Under Miller and 2016’s Montgomery v. Louisiana, every inmate serving juvenile life-without-parole is entitled to a new sentencing hearing that takes into consideration the constitutional differences between children and adults.

SB 439 would ensure that children under the age of 12 are excluded from prosecution in juvenile court. The bill seeks to “promote the rights, health, and well-being of the child by curbing premature exposure to incarceration” and addressing the needs “underlying their alleged offenses via alternatives to prosecution, including child welfare, education, and health care.

There are at least 20 states that have established a minimum age at which a child can be prosecuted. California is not among those states. In 2015, 974 children under the age of 12 were referred for prosecution. Approximately 250 of those kids were prosecuted in juvenile court. Only 8% of the cases were sustained as true.

Sentence “enhancements” on the books in California can turn a sentence of a few years into one of multiple decades.

California’s 1988 Street Terrorism Enforcement and Prevention (STEP) Act, created enhancements for crimes committed “for the benefit” of a gang. These enhancements were increased in 2000 by CA’s Proposition 21.

SB 180, the Repeal Ineffective Sentencing Enhancement (RISE) Act, seeks to combat jail overcrowding by doing away with a sentence enhancement for a repeat non-violent drug offense.

The bill’s co-sponsors include the ACLU of California, the California Public Defenders Association, and Drug Policy Alliance, among others.

NO COURT FEES FOR INNOCENT DEFENDANTS

SB 355 seeks to ensure that only people convicted of a crime are required to repay the courts for court-appointed counsel.

Under current California law, an innocent person who is charged with a crime, refuses to accept a plea deal, goes to trial, and then is found not guilty, can still be forced to reimburse the court thousands of dollars for the cost of their public defender or other court-appointed legal representation.

The bill would also take away prosecutors’ ability to pressure defendants to take a plea deal by threatening them with the cost of having to pay legal fees if they choose to go to trial.

In this way, innocent people sometimes plead guilty, and in exchange, the court fees are waived.

SEALING RECORDS OF PEOPLE ARRESTED BUT NOT CONVICTED

SB 393 would clear a currently tangled legal path to seal arrest records for people arrested but not convicted of a crime. The bill aims to tear down a major barrier to employment and housing for people with prior arrests.

Currently, California is one of four states (the others are Alabama, Florida, and South Carolina) that imposes a lifetime registry on sex offenders, regardless of the seriousness of the crime. This has led to a continuously growing state registry with over 100,000 registrants.

SB 695 would create a tiered registry based on the seriousness of a person’s offense, their risk of reoffending, and their overall criminal history.

According to Lara and Mitchell, the new system would help law enforcement to focus their resources on violent sex offenders and those with a high risk of reoffending.

One of the original purposes of the lifetime sex offender registry was to deter people from committing sex crimes, but the registry has not proven itself an effective deterrent.

The bill is sponsored by the LA County District Attorney’s Office, the California Sex Offender Management Board, the CA Coalition Against Sexual Assault, and Equality California.