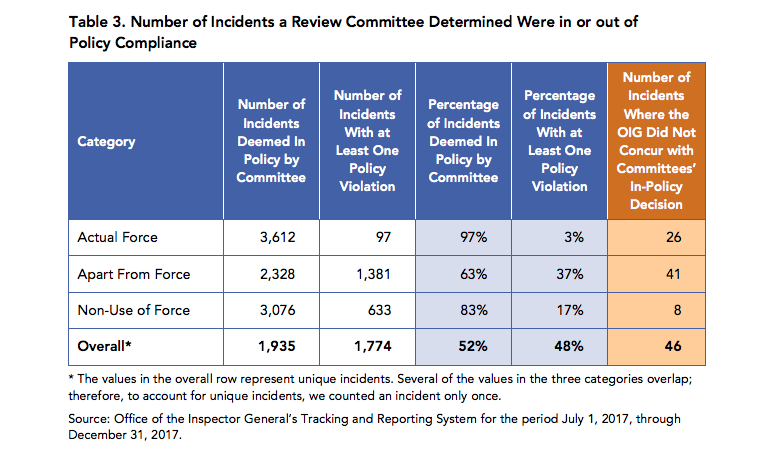 California prison guards violated department policy in nearly half of incidents in which force was used against inmates, according to a report from the state Office of Inspector General (OIG).

The OIG reviewed 3,709 force incidents reviewed by the California Department of Corrections and Rehabilitation (CDCR) between July and December 2017.

Out of the more than 3,700 incidents involving force against prisoners, just 52 percent met the state’s standards. A total of 1,774 did not.

In 47 of the incidents, the OIG’s review found that guards’ actions may have unnecessarily contributed to the need to use force against an inmate.

In one of those incidents, an officer let an agitated inmate who was cursing and yelling out of a medical holding cell. The unrestrained inmate attacked the officer, who had to use physical force and pepper spray to gain control of the situation.

A CDCR policy requires that interviews of inmates who allege excessive or unnecessary force, or who are seriously injured by a use-of-force, be recorded on video. Corrections officers complied with the rule in just 57 percent of the cases, however.

Additionally, the OIG found that in 68 of 292 cases in which inmates complained of unnecessary or excessive force, guards failed to adequately justify that there was an imminent need for a use-of-force.

While these instances accounted for a small portion of the thousands of incidents, the Inspector General pointed out that any “unnecessary force is a serious issue and could increase tension between staff and inmates and, ultimately, expose the department to legal liability.”

In a total of 44 of the 68 inadequately justified instances, the department determined unnecessary force was used.

In one case identified in the OIG report, an officer ordered an inmate to hand the guard a paper that another inmate had given him. Instead, the inmate tried to flush the paper down the toilet. The guard pepper sprayed the inmate. When the inmate continued to try to flush the piece of paper, the guard used physical force on the man, and then a second round of chemical spray.

The guard, who was unable to show an imminent threat leading to the use-of-force, was formally disciplined.

In another case, a prisoner failed to comply with a guard’s order to provide identification, and walked away from the guard “while making a derogatory comment.” When the inmate refused the officer’s order to stop walking, the officer grabbed the inmate from behind and forced the man to the ground.

This guard, too, could not show that an immediate threat preceded the force, and was disciplined.

In the incidents found to be out of policy, review committees most often recommended additional training for the officers involved. In a handful of cases, officers’ actions were met with more serious consequences, like formal counseling and disciplinary action.

In at least 1,685 of the 1,774 out-of-policy incidents, the department required involved officers to complete additional training. In 111 of the incidents, counseling was required. Supervisors took disciplinary action against officers in 16 cases, and sent 18 other incidents to the Office of Internal Affairs to be investigated.

The OIG’s report commends the CDCR’s recent implementation of a new use-of-force data collection system, which the OIG says will likely improve compliance with force-related policies.

The report also recommends that the department’s training for guards focuses on “the most common and serious times of violations identified from the department’s new use-of-force tracking system,” and that prison officials should “consider stronger progressive discipline for staff who repeatedly violate use-of-force policies.