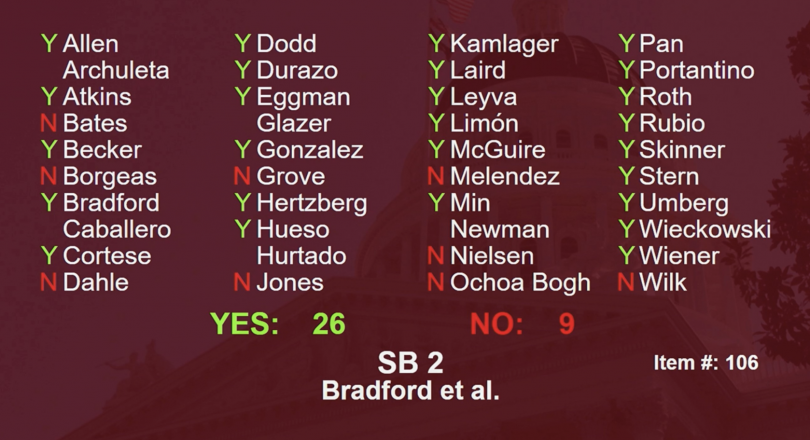 On May 26, the California Senate passed SB 2, a bill intended to keep officers found to have committed misconduct out of the profession .

Just a few days earlier, on May 21, the California Assembly and Senate’s fiscal committees decided the fate of more than 1,000 bills packed into their “suspense files,” sending some, including SB 2, onto the Senate and Assembly floors. Others, lawmakers quietly killed or left to marinate in the suspense file until next year’s legislative session.

These suspense files act as holding pens for bills that would have an annual financial impact of more than $150,000 for the state.

Although there are some exceptions to the rule, the Senate and Assembly’s Appropriations Committees generally send $150,000-plus bills into their suspense file to be acted upon by a mid-May deadline. Once that deadline hits, the committees hold high-speed mass-hearings, during which bills either clear the key hurdle or meet their end – at least for the current year.

Normally, in other committees, and on the house floors, lawmakers publicly vote on whether to approve or dump a bill, but in the fiscal committees, legislators can noiselessly kill bills without having to actually vote them down or put their reputations on the line.

While this is by no means an exhaustive list, here are a few of the noteworthy justice-related bills that have moved on to their respective house floors for a vote, as well as those left behind.

To the Legislative House Floors and Beyond

In a 26-9 vote on May 26, California’s Senators passed SB 2, by Sen. Steven Bradford (D-Gardena), a bill that would grant CA justice officials the power to decertify law enforcement officers fired for misconduct or convicted of certain crimes “against public justice,” including falsification of records, bribery, or perjury. In this way, the bill would stop those fired officers from being able to jump to a new city and a new job in law enforcement.

SB 2, the “Kenneth Ross Jr. Decertification Act,” would create an advisory panel consisting of seven civilians and two people with backgrounds in law enforcement to review cases and make recommendations for decertification to the state’s Commission on Peace Officer Standards Training (POST). Two of the civilian panel members would be individuals with family members who were killed by police or people who have otherwise experienced police misconduct. The remaining five people would “have substantial experience working at nonprofit or academic institutions on issues related to police misconduct.”

If the bill is enacted, California would join 46 other states that already have police decertification systems in place.

Lobbying from police unions and groups led to significant changes that cut away at a portion of the bill that would have made it easier for civilians to sue law enforcement officers for misconduct.

“California is able to revoke the certification or licenses of bad doctors, lawyers, and even barbers, but is unable to decertify police officers who have broken the law and violated the public trust,” said Sen. Bradford. “While California prides itself on being a leader on so many issues we are so far behind on this. On the heels of the one-year anniversary since the murder of George Floyd, we have a duty to the thousands of voices crying out for us to pass this bill.”

(A related bill, AB 718, which would require a police agency to share the investigation’s findings with another law enforcement agency if the person in question applies to work as an officer in a different region, passed through the Assembly and is currently working its way through the Senate’s committees. AB 718 would also require police agencies to complete misconduct and questionable use-of-force investigations even after an officer in question has resigned.)

Another bill approved by the Assembly, AB 750, aims to hold police officers accountable when they make false reports by closing a legal loophole through which officers can get away with lying. Current law, according to bill author Assemblymember Reggie Jones-Sawyer said, allows “one officer to make a false statement in a police report and evade criminal charges by having a second officer write and file the report for them.”

A bill to create alternatives to police response, The Community Response Initiative to Strengthen Emergency Systems (CRISES) Act, AB 118, by Assemblymember Sydney Kamlager, sailed out of the Assembly Appropriations suspense file and easily passed the Assembly Floor in a 75-0 vote.

The bill would put community organizations in the role of first responder for certain calls involving homelessness, mental health, domestic abuse, and other situations that the bill’s supporters say would be better served by community-based response teams centered on culturally appropriate, trauma-informed, and relationship-building services.

Another bill, Senator Nancy Skinner’s SB 354, also passed through the suspense file gauntlet and across the Senate floor to land in the Assembly. The bill would create pathways for kids in foster care to be placed with relatives whose criminal convictions would otherwise exclude them from being approved to care for their young family members.

One particularly important bill that emerged from the Senate Appropriations Committee was SB 731, by Sen. Maria Elena Durazo (D-Los Angeles). The bill would automatically “sunset” and seal conviction and arrest records for formerly incarcerated Californians who remain free from contact with the justice system for two years after their release.

SB 262, a bill to require the statewide bail schedule to set bail at $0 for all misdemeanors and many felonies, passed both its fiscal committee and the full Senate. The bill would exclude crimes categorized as serious or violent in the Penal Code, as well as violating protective orders, battery against a spouse, sex offenses, and driving under the influence.

AB 1127, which would establish that past crimes committed by juveniles do not count as serious or violent felony convictions, making them ineligible to count as sentence-enhancing strikes, also passed through appropriations. Assemblymember Miguel Santiago (D-Los Angeles) introduced the bill in partnership with the Anti-Recidivism Coalition and LA County District Attorney George Gascón.

While many of the bills that we’re tracking are still traveling the path to Governor Gavin Newsom’s desk, some noteworthy bills failed to pass out of the Senate and Assembly’s respective “suspense files.”

In certain cases, the bills that remained in suspense became “two-year” bills and will be addressed next year.

One of those two-year bills, AB 594, seeks outside investigations for fatal police shootings of armed individuals.