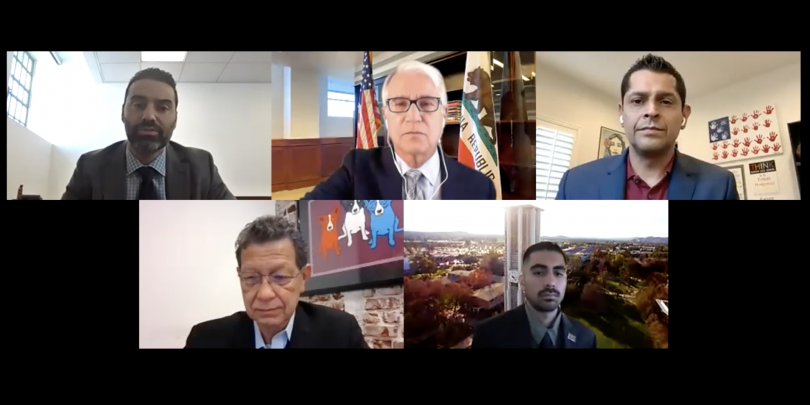 In 1994, California enacted a so-called “Three Strikes” law that allowed courts to send a person to prison for 25-years-to-life for committing three felonies, if the first two were categorized as serious or violent crimes. (The law also automatically doubled sentences for second strikes.)

The 2012 passage of Proposition 36 amended the law to only trigger a 25-to-life sentence enhancement if a person’s third strike was also categorized as a violent or serious felony.

Under the law, a prosecutor can hit a defendant with a “third strike” sentence enhancement, even if one of the strikes was a crime committed when the defendant was 16 or 17.

If passed, the new bill, AB 1127, would establish that past crimes committed by juveniles do not count as serious or violent felony convictions, making them ineligible to count as strikes.

The bill would also open a pathway for vacating sentence enhancements built on juvenile crimes, and allow for resentencing.

As a teen, Miguel Garcia, an advocacy coordinator at the Anti-Recidivism Coalition, was charged with premeditated attempted murder, placing a juvenile strike on his record. While Garcia worked hard and earned three degrees from the University of Riverside upon his return to the community, before becoming a leader in the justice reform advocacy sphere, he said that if he ever committed another crime, his teenage crime would count as a strike that could lengthen his sentence. This is the story for many people of color with youthful crimes on their records. “The reality is juvenile strikes are over-punitive and unjust,” and counter to the movement toward a system focused on rehabilitation, Garcia said.

DA Gascón stressed that three-strikes laws, like many other tough-on-crime laws and policies, disproportionately impact people of color — especially Black people — and people from low-income communities. Having a juvenile crime count as a strike increases the likelihood of a long prison sentence, “enhanced” with extra punishment for past offenses, despite the fact that the person has already served their punishment for those older convictions. (Not to mention the collateral consequences that raise hundreds of roadblocks to stable housing, employment, social services, and more.)

And research shows that multiple-strike sentence enhancements do not improve public safety.

The bill, he said, was in furtherance of the “real purpose of the juvenile justice system: to rehabilitate,” rather than discard, young people.

“To use crimes committed while an adolescent’s brain is still developing to punish them as adults just does not make sense,” Gascón said. “When we put our energy toward rehabilitating young people, we improve community safety by reducing recidivism.”

At the local level, LA’s top prosecutor has faced pushback from tough-on-crime proponents, the Los Angeles Police Protective League (LAPPL) and the LA Association of Deputy District Attorneys (ADDA), for announcing that his office would not — in nearly all cases — seek sentence enhancements based on a person’s prior strikes. The ADDA went so far as to take Gascón to court over his reform-minded sentencing directives.