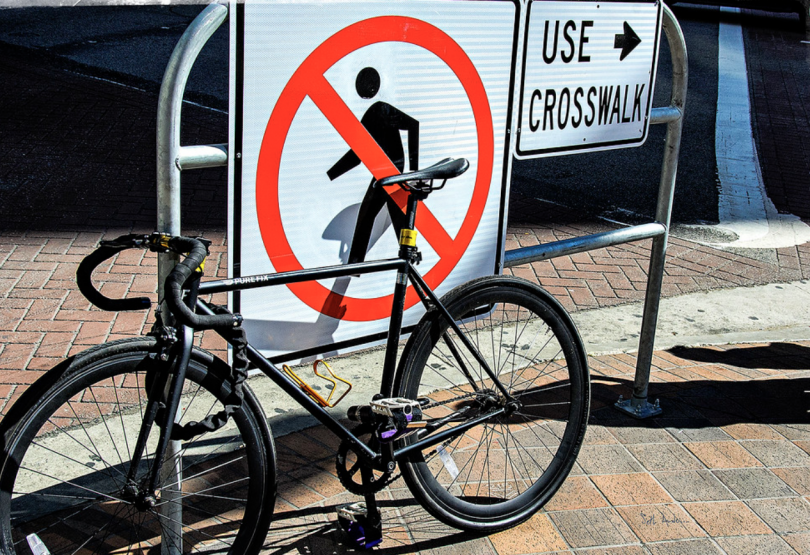 Black Californians are up to 4.5 times more likely to be stopped for jaywalking than their white peers, according to data the state collects under the Racial and Identity Profiling Act (RIPA). The Freedom to Walk Act, a bill introduced by Assemblymember Phil Ting (D-San Francisco) and pedestrian safety groups, aims to address this disparity by decriminalizing walking in the street outside of a legal intersection.

Police interactions — even over minor infractions for crossing the street — can be deadly, especially for people of color and individuals experiencing homelessness, whom police commonly stop for non-serious infractions and quality-of-life crimes related to their unhoused status.

On September 23, 2020, members of the Orange County Sheriff’s Department’s homeless outreach team shot and killed 42-year-old Kurt Andras Reinhold after stopping him for jaywalking. Before the fatal encounter, deputies’ body-worn microphones recorded the officers arguing about whether Reinhold had actually illegally jaywalked when he crossed at an intersection.

Three years earlier, in April 2017, a Sacramento police officer stopped pedestrian Nandi Cain, then threw him to the ground and punched him repeatedly, breaking Cain’s nose and giving him a concussion.

That same year, in Asheville, North Carolina, then-officer Chris Hickman beat, choked, and shocked another Black man, Johnnie Rush, after stopping him for crossing the street.

Both Cain and Rush survived and received settlements from their cities.

In another instance, in 1993 an LAPD officer, Clark Baker, was convicted of misdemeanor battery for kicking and slapping a man, twisting his arm, and dragging him by the hair after the 23-year-old, who reportedly spoke little English, asked the officer to read his jaywalking citation to him.

Walking in the street is not the only minor infraction that leads to violent police encounters.

Advocates say that pedestrian and bicycle laws and other low-level, commonly committed vehicle violations allow law enforcement to conduct racially disparate pretextual stops and searches while filling the city’s coffers with tickets that often cost hundreds of dollars each.

“Whether it’s someone’s life or the hundreds of dollars in fines, the cost is too much for a relatively minor infraction,” Asm. Ting said at a press conference announcing The Freedom to Walk Act (AB 1238) in March. “It’s time to reconsider how we use our law enforcement resources and whether our jaywalking laws really do protect pedestrians.”

These numbers may be alarmingly high, but there are jurisdictions with worse disparities. Sacramento is one of them. In 2016, half of the 233 jaywalking tickets Sacramento’s law enforcement officers issued went to Black people. Yet, Black individuals make up just 15 percent of the city’s population.

Data from the Racial Identity and Profiling Act (RIPA)

Arbitrarily and disparately enforced jaywalking laws emerged in the 1930s, backed by the booming auto industry, with the intention of improving streets for an ever-increasing number of drivers and shifting the blame for driver-pedestrian accidents to pedestrians.

Legalizing most street crossings would go a long way toward addressing a system that disproportionately impacts Black residents and saddles low-income individuals and families with tickets costing hundreds of dollars, according to Asm. Phil Ting and the advocacy organizations he partnered with to introduce the bill — CalBike, California Walks, and Los Angeles Walks. In California, jaywalking citations cost at least $197.

“Low-income communities and communities of color are more likely to be cited for crossing unsafely due to societal racial bias and poor crosswalk conditions in their neighborhoods that emphasize drivers’ needs over other road users,” said Caro Jauregui, Co-Executive Director of California Walks. “Walking should not be a dangerous activity in the communities where people rely on walking for transportation.”

The bill repeals portions of state law that place blanket prohibitions on pedestrians stepping into a non-residential street under any circumstances other than when crossing “between adjacent intersections controlled by traffic control signal devices or by police officers.”

AB 1238 would “prohibit a pedestrian who crosses or enters a roadway when no cars are present from being subject to a fine or criminal penalty.”

The bill does, however, have a carveout for street crossings in which a “reasonably careful person” would know that an approaching vehicle was so near or moving so fast that crossing would “constitute an immediate hazard.” Some advocates have expressed concern that this language will create just enough legal space for police to continue problematic jaywalking stops.

The bill passed through the Assembly’s Transportation Committee on April 27, and is now awaiting a hearing in the Appropriations Committee.

Meanwhile, last Tuesday, May 4, the Los Angeles County Board of Supervisors approved a motion to officially support AB 1238.

Crash data, motion author Supervisor Holly Mitchell wrote, shows that “the number one cause of death in a car crash [involving a pedestrian] is the speed of the vehicle, rather than behavior from people walking.”

“Traffic safety improvements that redesign streets and increase pedestrian amenities are more effective at reducing traffic fatalities than any other strategy,” said Mitchell. “For instance, installing an ‘all pedestrian phase’ signal (pedestrian scramble) reduces pedestrian crashes by up to 35 percent.”

The board received a handful of public comments in favor of the motion.

In many neighborhoods and communities, “the length of the sidewalk from one crosswalk to the other is ridiculously long,” said Maygin McEwen. “Depending on one’s physical condition it is far more difficult to go an eighth of a mile to the corner across the street go another eighth of a mile back down to where you need to go when you could have simply crossed the street at a safe time.”

One woman wrote to the board to say that she had been arrested and jailed overnight for allegedly jaywalking. “This is a corrupt system that shouldn’t exist!” the commentor, Tieira, said. “Pedestrians deserve more space to walk!”

“We need to support walking” and “not arrest people, especially people of color, for trying to safely cross the street,” said Deborah Murphy, chair of the City of Los Angeles Pedestrian Advisory Committee and founder of Los Angeles Walks.

In February, the Los Angeles City Council voted to explore options for replacing police enforcement of traffic violations, which includes jaywalking, with a team of unarmed civilian responders, likely from the Department of Transportation. With their vote, the councilmembers directed the DOT to conduct a feasibility study focused on civilian-led traffic enforcement. Transportation officials were also tasked with creating a task force that will hold community listening sessions and develop recommendations for traffic safety alternatives to the city’s current enforcement system.

The need for systemic change around traffic safety — in Los Angeles and across the state — is made clear in a recent report from Advancement Project California’s RACE COUNTS Initiative and PUSH LA.

The report revealed that LAPD officers spent 183,616.3 hours on stops for traffic violations between January and September 2019. And they tended to spend more time on stops involving Black individuals than white people.

The report recommended agencies immediately cease the use of “extremely dangerous and harmful” pretextual stops, remove the LAPD’s scandal-plagued Metro Division from South LA, ban vehicle consent searches, and hold officers accountable for wrongdoing. Report authors also call for improvements to urban design that boost traffic safety, as well as the adoption of strategies that “address the root causes of traffic safety issues.”

“The recommendations from this report outline the changes needed to move towards reimagining public safety in a way that honors the clarion call of activists, while actually improving safety outcomes at once,” said Los Angeles Councilmember Marqueece Harris-Dawson.