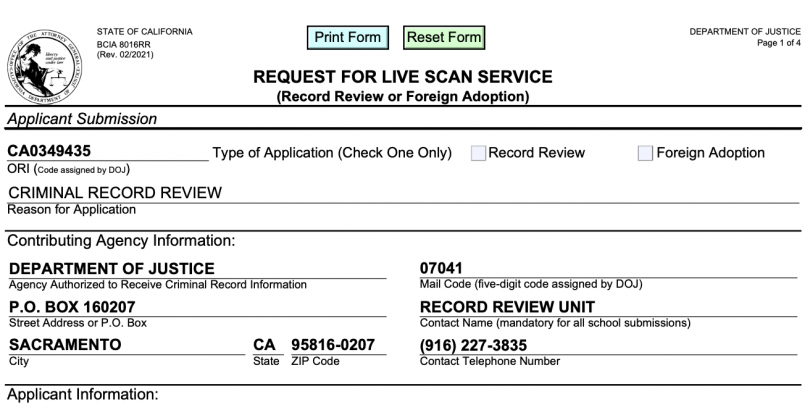 Next week, the Los Angeles County Board of Supervisors will consider a motion from Supervisors Hilda Solis and Holly Mitchell to declare support for a bill that would automatically “sunset” and seal conviction and arrest records for formerly incarcerated Californians who remain free from contact with the justice system for two years after their release. The bill, SB 731, would also seal the arrest records of people who were arrested, but not convicted of a crime.

The bill has the support of more than 110 groups — ranging from advocates, to faith organizations, to law enforcement. A group of 70 of those supporters, which include the Anti-Recidivism Coalition, Homeboy Industries, the Los Angeles Regional Reentry Partnership, and Californians for Safety and Justice — which developed the sunset model — sent a letter to state legislators earlier this year, calling for the bill’s passage.

“Successful reintegration means more than a demonstrated commitment to abide by the law. It also assumes an ability to support oneself and one’s family through legal, gainful employment,” the letter said. “Yet, because of the legacy of their contact with the  legal system, as many as one in five Californians—nearly 8 million people currently living with a past conviction—face unemployment or underemployment, chronic  economic insecurity, and poverty for themselves and their families.”

Nationally, there are approximately 70 million people with a past conviction or arrest stamped on their record.

In their motion, Supervisors Solis and Mitchell also note that “marginalization and oppression” follow people long after they are released from prison or jail. “Our criminal justice system is one that harms, disenfranchises, and oppresses communities of color, especially those who are Black or Latinx,” who make up 80 percent of the people in LA’s jails, according to the motion.

If approved, the motion will direct the county’s legislative advocates in Sacramento to back the bill. The spirit of SB 731 is in keeping with the “care first, jails last” model LA County is working to build.

Just under 75 percent of formerly incarcerated people are still unemployed one year after their release, a 2017 ACLU report on the benefits of hiring people exiting lockup found.

While employment has been proven to greatly reduce recidivism, and hiring people with criminal histories improves businesses’ retention rates, stigma often shuts the door to employment before formerly incarcerated job seekers have a chance to prove their worth.

Gilbert Johnson, who sent in written public comment in advance of the supervisors’ Tuesday meeting, said that a non-violent, drug-related felony kept him locked out of jobs and without housing options. The conviction, Johnson wrote, “nearly resulted in my family and I becoming homeless.”

“…Fortunately, I had family members with floor space until we could get situated,” he said. “I know so many others that did not have that luxury and suffered even though they hadn’t committed any new crimes.”

The Anti-Recidivism Coalition’s advocacy director, Esteban Nuñez, who is also formerly incarcerated, said that during his time in and after prison, he saw the power of hope, and how important rehabilitative programming is for people coming home. After incarceration, he said, “the odds are continuously stacked against you.” SB 731 would go a long way toward fixing that in California, according to Nuñez, ARC, and the bill’s other sponsors.

In the oppositional corner, the Peace Officers Research Association of California (PORAC) has said that felony records serve as a deterrent to future crime, and that passage of the bill would be detrimental to public safety. “Oftentimes, felony crimes are violent and leave behind innocent victims whose lives will never be the same,” the association said. “By allowing violent criminals back on the street, with their record dismissed, they will have less deterrent to commit another crime,” and will create more victims. PORAC said that it would be willing to rescind its opposition if lawmakers amended the bill to exclude people convicted of violent crimes.

The bill, which Senator María Elena Durazo (D-Los Angeles) introduced in partnership with Sen. Steven Bradford, passed out of the Senate Public Safety Committee with a 4-1 vote on April 13.

The model, created by Californians for Safety and Justice, “relies on information that is already held in state government databases to move from a slow, laborious, and costly petition-based relief model to an automated model that will close the uptake gap and bring record relief to millions of Californians. ”

“Despite the data on recidivism,” Sen. Durazo said, “California still maintains [criminal] records until the person reaches 100 years of age,” and the widespread use of background checks “activates thousands of barriers” to employment, housing, civic participation, and more. These collateral consequences, she said, “have become one of the leading drivers of multi-generational poverty.”