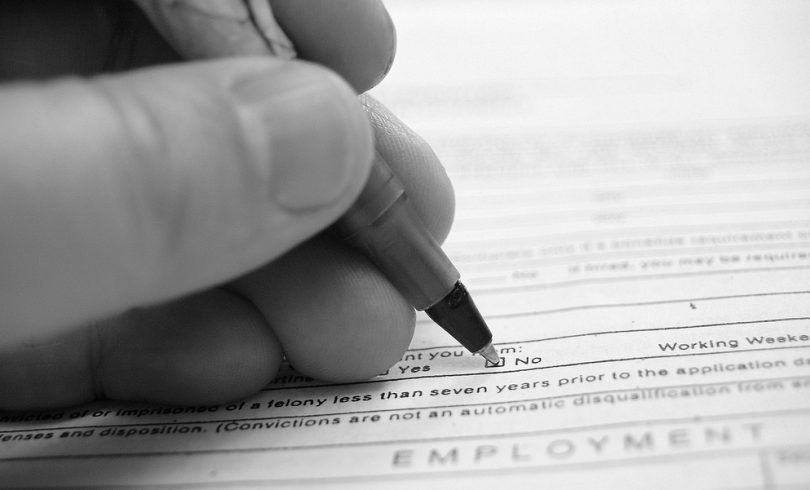 EDITOR’S NOTE: The cities of Los Angeles and San Francisco have both adopted “ban the box” ordinances that bar public and private employers from asking job-seekers–on their initial application–whether they have been convicted of a crime.

This year, California Assemblyman Kevin McCarty (D-Sacramento) also introduced a bill, AB 1008, to ban the box statewide. On August 21, the Senate Appropriations Committee placed the bill on suspense. (For those unfamiliar, the suspense file is a tool unique to the fiscal committees. Legislators use the suspense file process to meet and decide behind closed doors which bills will move on and which will be–quietly–dumped.)

“Ban the box” laws, which bar employers from asking job applicants whether they have a criminal record, may be harming some of the people they are intended to help.

Twenty-nine states prevent state and sometimes city and county employers from including a criminal history box on job applications. Nine states have extended the ban to private employers as well.

The idea behind the laws is that removing the box stops employers from immediately rejecting a candidate with a record before meeting him. If granted an interview, the applicant might be able to make a good impression and perhaps explain his conviction before the employer uncovers it.

But several recent studies have found that black men, even those without a criminal history, are less likely to get called back or hired after a ban the box law is put in place. Researchers suspect that employers who can’t ask about an applicant’s criminal background preemptively weed out young black men, who disproportionately have criminal records.

One study of ex-offenders in Massachusetts found that regardless of race, people with criminal records were less likely to get jobs after ban the box than before. The authors of that study theorize that in the wake of ban the box, which became law in Massachusetts in 2010, employers may have raised the minimum requirements for job applicants, and that more ex-offenders, emboldened by ban the box, may be stretching for jobs they previously thought were out of reach.

The new questions swirling around ban the box laws have split advocates who agree on the need to expand job prospects for a notoriously hard-to-employ group.

Jennifer Doleac, an economics professor at the University of Virginia who has studied ban the box laws, said they should be scrapped.

“We have two very good studies that show it’s really hurting young black men who don’t have college degrees and who struggle in the labor market for other reasons,” Doleac said. “If this law is getting people interviewed for jobs they’re never going to get, that can become discouraging for job seekers and a waste of everyone’s time.”

But ban the box supporters point to some groups, such as young white men, who appear to have been helped by the laws. They argue that giving liability protection to companies that hire ex-offenders or making it easier for ex-offenders to get their criminal records expunged could help close the racial gaps in how ban the box is affecting job applicants.

“The problem isn’t ban the box, the problem is racial discrimination and that we haven’t been able to tackle it,” said Michelle Rodriguez with the National Employment Law Center, which supports ban the box.

Some studies have found race to be a major factor in whether people with criminal records were helped or hurt by ban the box in both the public and private sectors.

In a recent study of the effect of ban the box on private, for-profit employers in New York and New Jersey, researchers sent out applications with similar resumes but changed the names of applicants so that they were distinctively black or white, based on birth certificate data. The fictitious applicants were all 21-22-year-old males.

For Amanda Agan, an economics professor at Rutgers University and an author of the study, the penalty is too steep for blacks, particularly those without a record.

“Racial discrimination is a problem and pervasive in a lot of settings. I think these studies really show though that employers are perfectly happy to hire young black men when they can ask” about their criminal history, she said. “They seem to care more about a criminal record than race.”

Other studies have not put such an emphasis on race. Researchers at the Federal Reserve Bank of Boston, who conducted the Massachusetts study, found that ban the box decreased the ex-offender employment rate by nearly 4 percent, no matter the race of the applicant.

Citing those mixed results, ban the box supporters say it would be premature to eliminate the laws.

“What the conclusion really should be from them is ban the box works, but let’s make sure we’re also focused on black workers and discrimination they experience in the workplace,” Rodriguez said. “Why would you throw out all that good when you can … try to target that population that needs more support?”

Mychal Cohen, a researcher with the Urban Institute, a Washington think tank, said making it easier for ex-offenders to get their criminal records expunged and redacting identifying information such as names and addresses from job applications could help boost the employment of black people with a criminal record.

Many states are also now offering certificates of employability to ex-offenders, which are designed to vouch for their rehabilitation but also offer employers protection from negligent hiring lawsuits.

This year Ohio enacted a law that expands the state’s existing certificate program by removing the requirement that an ex-offender list a specific job they are applying for before seeking the certificate.

The certificates are only available to those who are one year out from the completion of their felony sentence, including probation or parole. A judge reviews records from every place they’ve served, notes from corrections or probation officers and any evidence of rehabilitation that an ex-offender provides. The state has issued more than 500 certificates since the program started in 2012.

Ohio state Rep. Bill Seitz, a Republican who sponsored the law creating the certificate program, also voted for the state’s 2015 ban the box law for public employers. But he said certificates are a better approach.

With the certificates, he said, “there is some judicial or agency effort to put a Good Housekeeping seal of approval on this person’s application, that they’ve been rehabilitated and are therefore employable,” he said.

Doleac said more services are needed in prison and as people are released to make them more employable, ranging from job training to therapy to drug treatment.

“This is just going to be a tougher problem to solve,” Doleac said. Rather than blaming employers, she said, “it’s more society’s fault. We’re going to have to start investing time and resources into the help that this group needs.”

Rebecca Beitsch is a staff writer for Stateline, an initiative of The Pew Charitable Trusts.