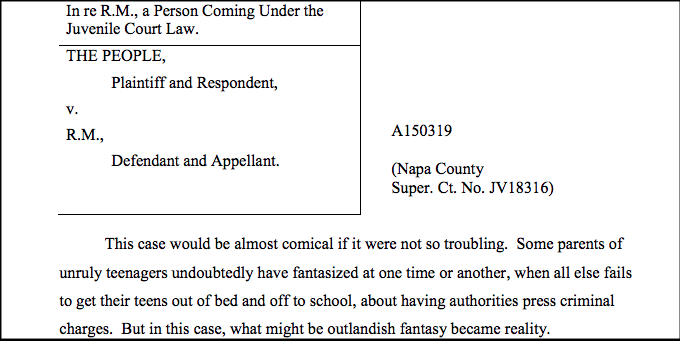 Late last week, the First District Court of Appeal in San Francisco ruled in favor of a “mouthy” teen with “an abysmal school attendance record,” who was arrested, sent to juvenile hall for a total of 17 days, and placed on probation because she refused to go to class.

“This case would be almost comical if it were not so troubling,” Justice Therese Stewart wrote in appeals court’s opinion. “Some parents of unruly teenagers undoubtedly have fantasized at one time or another, when all else fails to get their teens out of bed and off to school, about having authorities press criminal charges. But in this case, what might be outlandish fantasy became reality.”

On March 10, 2016, a Napa mother called a local police officer to help with her 17-year-old daughter–identified as R.M.–who was regularly truant, and was refusing, once again, to go to school.

The Napa diversion officer’s job was to work with school administrators and parents to meaningfully address chronic truancy and other issues without criminalizing kids. The police officer, who was familiar with R.M.’s situation, and had been called out to her house before, arrived at the home with a Napa County deputy in charge of security (and truancy) at R.M.’s school.

After reportedly becoming hostile and defiant and swearing at the officers, R.M. eventually complied and allowed them to drive her to school.

However, once on campus, R.M. refused to follow orders from the diversion officer, the school’s principal, and finally, the deputy, to head to class. R.M. again “uttered profanities” and said she was leaving. When the deputy, reportedly believing R.M. would leave campus, arrested the teen, she did not resist.

After R.M. had been in juvenile hall for two days, the juvenile court sustained the deputy’s allegations that the teen violated Penal Code section 148 because she “delayed a police officer in performing his duties”—an offense that carried a sentence of up to a year in lockup.

The court declared R.M. a delinquent ward of the court, and gave her a 15-day sentence, to be followed by home probation, the terms of which included 30 days wearing a GPS monitor, gang-related conditions, and warrantless search of her electronic devices, social media accounts, and cloud-stored data at any time.

The 1st District Court ruled that juvenile court could not criminalize the teen’s actions, however.

According to the appeals court, “because the arresting officer was not performing a legal duty when he ordered her to class,” the teen “could not be charged criminally for disobeying his order.”

It’s state legislators’ job “to decide how to redress a minor’s truant behavior,” according to the appeals court. “California’s lawmakers have and, as discussed, the Legislature has specified that, in appropriate cases,” courts can place kids under supervision. “What local law enforcement may not do when a minor who is present at school refuses a directive to attend class,” Justice Stewart continued, “is arrest that minor for a violation of Penal Code section 148, backed by the threat of incarceration and the full force of criminal law.”

Truancy, like underage drinking, violating curfew, and running away, is considered a “status” offense that would not violate state law if committed by an adult. And national data shows that while kids of color and white kids commit status offenses at roughly the same rates, youth of color—especially black youth—are far more likely to be arrested and incarcerated for status offenses than their white peers.

And while law enforcement officers or school administrators have the power to arrest or temporarily assume custody of a student who is absent from school without a valid excuse, the point of such arrests are supposed to be to get the kid to school as swiftly as possible, and if not school, then to their parents or to a counselor.

“In aggravated circumstances involving habitual truants, the juvenile court may assert jurisdiction over the minor as a status offender,” the appeals court continued. “Even then, however, the Legislature has enacted sharp limitations against confining truants, because the objective of this state’s truancy regime is educational not punitive.”

Not locking up kids for committing status offenses like truancy is one of the four “core protections” for youth in the juvenile justice system, as laid out in the federal Juvenile Justice and Delinquency Prevention Act of 1974.

The JJDPA, which is due to be re-upped and strengthened, gives federal grants to states that comply with these four protections. States can be hit with 20 percent reductions in funding for failing to comply with each of the four JJDPA standards.

Last week, The Chronicle of Social Change’s John Kelly reported that sources inside the U.S. Department of Justice have revealed that the DOJ intends to make crippling cuts to its Office of Juvenile Justice and Delinquency Prevention, or OJJDP, the government agency that—as its mission statement declares—“provides national leadership, coordination, and resources to prevent and respond to juvenile delinquency and victimization.”

The OJJDP’s primary function is to oversee states’ compliance with the JJDPA’s four tenants. This has advocates worried that a reduction in manpower will mean a reduction in the agency’s capacity to enforce the JJDPA, especially if the important law is not updated.

Congress, not for lack of trying, has not successfully updated the JJDPA in more than 15 years. Senator Tom Cotton (R-AR), the lone holdout, has stopped the reauthorization of the act, because of his opposition to the closing of a loophole that allows courts to detain status offenders who violate a court order (a court order to go to school, for example).