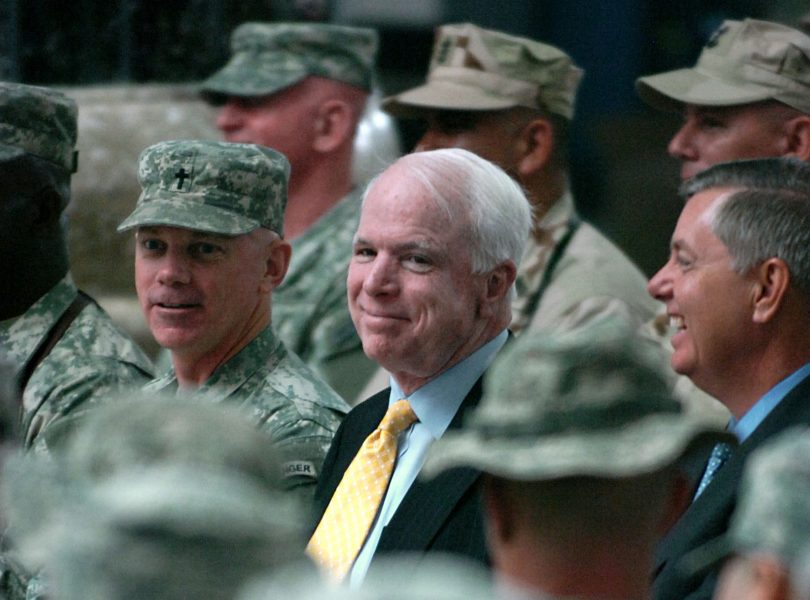 The announcement when it came from his office late Saturday afternoon was, of course,  not unexpected, but still it was shocking.

“Senator John Sidney McCain III died at 4:28 pm on August 25, 2018. With the Senator when he passed were his wife Cindy and their family. At his death, he had served the United States of America faithfully for sixty years.”

The time of death was unusually exact for such statements, as if those who worked with him understood that it would somehow matter to the rest of us to know, not just the date and the general hour, but the minute that Senator John McCain left this world.

“I fell in love with my country when I was a prisoner in someone else’s,” McCain said in his acceptance speech for his 2008 run for president. “I loved it for its decency, for its faith in the wisdom, justice, and goodness of its people. I loved it because it was not just a place but an idea, a cause worth fighting for. I was never the same again; I wasn’t my own man anymore; I was my country’s.”

Shoe-horned into the speeches of most other politicians, such statements would have come off as meaningless election self-aggrandizement. Yet, when John McCain spoke the words, they burst into the atmosphere of the Xcel Energy Center in Saint Paul, Minnesota, as hard won truths. Yes, the phrases were polished by Mark Salter, who was McCain’s speechwriter and close aid for three decades. But Salter knew how to distill the best and truest parts of his boss, who in his devotion to service of his country rejected what he called “half-baked, spurious nationalism,”  which he believed feared ethical leadership, and turned patriotism into an enemy-filled zero sum game.

John McCain was also hot headed, a smart ass (by his own description), cantankerous, and capable of going against his better instincts, sometimes disastrously, as with his close brush with scandal in the Keating Five debacle, and his selection of Sarah Palin as a running mate, which he came to regret.

Yet, the Senator admitted to his failings readily, especially when he failed to live up to the the ideals he set for himself. At times, friends thought, he blurted his mistakes too quickly ahead of his victories.  Still, his courage, his decency, and his “maverick” tenacity when pursuing whatever he believed to be truly righteous and important, in the end always gleamed the brightest, even in the eyes of those who opposed him politically.

In the Senate, McCain did not hesitate to reach across the aisle to get things done, and saw Ted Kennedy—with whom he often fought—as “the closest of friends,” he told 60 Minutes.

It made a bizarre and melancholic kind of cosmic sense that he and Kennedy coincidentally died on the same day, of the same disease, nine years apart.

Known for his straight talking, man-of-action persona, McCain also loved literature—like, really loved it. In May of this year, he told the New York Times Book Review that he’d recently reread F. Scott Fitzgerald’s The Great Gatsby for the “poetic quality of his prose.” McCain adored the terse, manly-man eloquence of Ernest Hemingway, but his other favorite was W. Somerset Maugham, whom he appreciated for his “cosmopolitan sensibility, his feel for the personal and social dramas provoked by clashing cultures,” he said.

McCain had plenty of experience with clashing cultures and countries. Arguably the nation’s most famous prisoner of war, McCain was shot down as a Navy pilot over Vietnam, where he spent 5 1/2 years as a POW.  The son of an admiral, less than a year after his capture, McCain was abruptly offered an early release. He refused to go home earlier than those captured before him. Post refusal, McCain was especially severely tortured, and was kept for more than two years of his imprisonment in solitary confinement.

His wartime injuries left him unable to raise his arms above his shoulders. He spoke out  ferociously against torture, and also about solitary confinement, writing that he and his fellow prisoners found social isolation to be “as torturous and agonizing as any physical abuse they suffered.”

In the senate, with a few notable exceptions like 2007’s Second Chance Act, he leaned mostly toward law-and-order legislation rather than justice reform.  Yet, his unassailable account of the high psychic cost of solitary helped reformers working to limit its use in state prisons, and continues to help justice advocates even now.

Similarly, it was the perennially hawkish McCain who was in the lead in 1993 and 1994, along with fellow Vietnam vet and close friend, Democratic Senator John Kerry, to restore diplomatic relations with the country that had imprisoned and brutalized him, when others in his party opposed the long-overdue move.

McCain experienced, up close, some of the best and worst that his—our—fellow humans have to offer.

But even in his last months, his optimism, rather than waning, seemed to bloom, if anything, more fully.

“I wish all of you great adventures, good company, and lives as lucky as mine,” he wrote to his fellow Americans, in his last book, The Restless Wave, written with Mark Salter, much of it after McCain knew he was dying, and released in late May of this year.

As Salter told the New Yorker’s Benjamin Wallace-Wells about his boss and friend:

“He knows how to hold on to hope when it’s for suckers.”

Rest in Peace, Senator John Sidney McCain III.  We will miss you.  A lot.

The photo above shows Senator John McCain when he attended a reenlistment, naturalization and Independence Day ceremony at the Al-Faw Palace in Baghdad, Iraq, on July 4, 2007. He and Senator Lindsey Graham were guest speakers for the ceremony that reenlisted 571 service members and gave citizenship to 161. The U.S. Navy photo is by Mass Communication Specialist 2nd Class Jennifer A. Villalovos, Wikimedia Commons