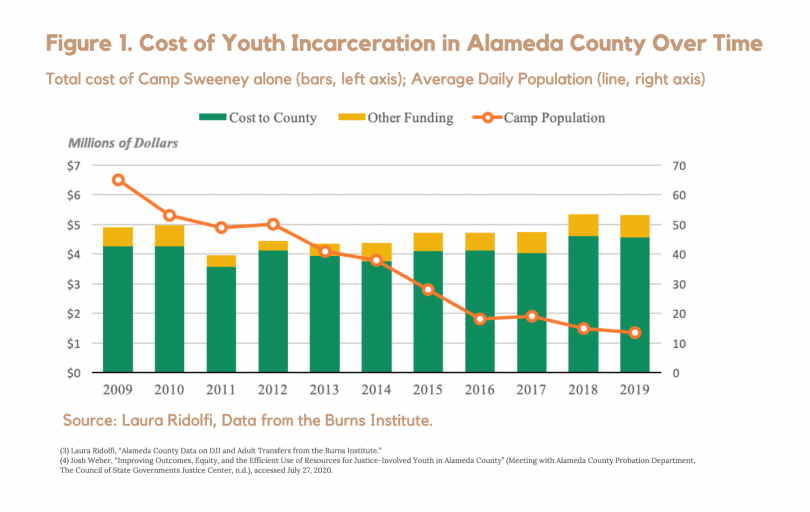 With an overall juvenile justice budget of $156 million, Alameda County spends approximately $493,000 per year for each kid in its probation-run juvenile detention facilities, says a new report from the Ella Baker Center for Human Rights. Nearly one in three of those young people will be re-convicted after release.

There were also 39 and 48 young people on GPS monitoring and home supervision, according to the county’s data. Among those 87 kids supervised in the community, just one was white.

These numbers serve as evidence that probation and incarceration fail to keep communities safe, the Ella Baker Center says. The 42-page report, authored by Amisha Kambath, digs into the history – and maps out a reimagined future — of youth justice in Alameda County, home of Oakland, where Black youth are approximately 113 times more likely than their white peers to be arrested for a felony.

The price “has become especially untenable in light of the COVID-induced fiscal crisis,” Kambath writes.

While youth incarceration numbers have dropped precipitously in Alameda County, as it has across the state and nation, spending on locking up young people has remained relatively unchanged, and has even ticked upward in Alameda and other jurisdictions.

It costs Alameda County an average of $23,000 per year for each young person on probation.

The county’s restorative justice programs, in turn, have recidivism rates of 5 percent among the kids charged with serious and violent crimes, the report notes. The community-based programs have a one-time cost of $4,500 per participant.

Thus, the Ella Baker Center calls on Alameda officials to reallocate much of the money they budget for youth incarceration and supervision for alternatives that serve kids in their communities, instead.

One of those strategies is spending a “significantly greater” portion of probation’s budget and the county’s federal juvenile justice dollars on community-based organizations as well as on infrastructural changes to probation, with the goal of keeping more kids out of the justice system.

Alameda spends $8 million (or 4.5 percent) of its $156 million probation budget on community-based organizations. This “sends a strong message of where Alameda County’s priorities lie, and it does not seem to be with our youth,” Kambath writes.

More resources should be also directed toward cities like San Leandro and Hayward, where a disproportionate number of kids come into contact with the probation department.

Instead of continuing to “falsely equate punishment with accountability,” for kids accused of serious crimes, the county’s criminal legal system must change how it responds to violent offenses and the kids accused of committing them. These kids are often locked out of diversion and restorative justice programs.

Yet models elsewhere in the country show that serious offenses are good candidates for restorative justice responses. New York City’s Common Justice offers just such a diversion model, providing 12- to 15-month violence intervention and other harm-reduction work for the person who has harmed, and victim services for the survivor. The survivor must consent to having the case handled via restorative justice, however, before a case is eligible for Common Justice’s program.

Surveys often reveal that survivors of violent crimes want to have their voices heard, they want the person responsible to work to repair the harmed caused, and they want to believe that person will not go on to harm others in the future.

In addition to opening a path for diversion for violent crimes, Alameda must expand its capacity for low-risk diversion cases. Kambath notes that non-serious offenses make up a high percentage of the county’s detention cases, and calls for the county to end the incarceration of kids for status offenses (acts that are only crimes if committed while underage, technical probation violations, and other misdemeanors).

The report also calls for prioritizing and funding “youth-serving” systems, like Youth ALIVE! and Community & Youth Outreach, that work to interrupt the cycles of violence in communities, as well as those that endeavor to fill gaps in economic opportunities, social and leadership development, and meet other needs.

“Although the County does allocate a portion of funding towards CBOs and preventative services,” says Kambath, “Alameda County still overwhelmingly prioritizes probation, despite the ample research demonstrating that youth processed through probation have worse outcomes than youth who are able to remain outside of probation’s involvement.

Additionally, the author recommends restructuring the way Alameda offers system-involved kids services. Currently, probation is the “main coordinating body of services and resources” for system-involved kids. That responsibility should lie with the Department of Human Services, instead, where public health is prioritized.

“We have a real opportunity,” Ella Baker’s Executive Director, Zachary Norris, tweeted, to “remake youth justice in Alameda County. Why prepare young people for prison when we can prepare them to lead. We desperately need their leadership.”